After twelve days in Khrungthep, Trish wrapped up her trip.  On her last night here, Trish had some unfinished business: a return trip to the Erawan Shrine.  A Brahman shrine located on the property of the Hyatt Erawan Hotel, the Erawan Shrine is a popular destination for visitors and Thais alike. 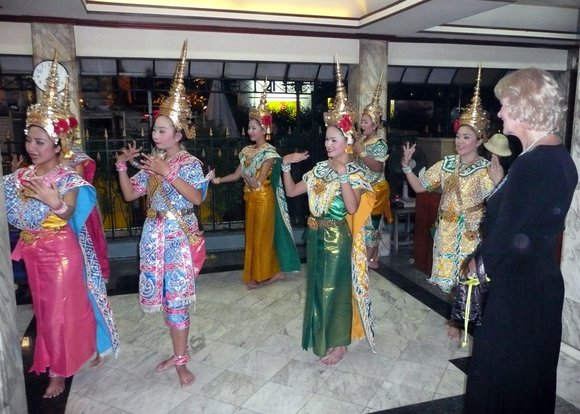 The shrine’s reputation is for granting wishes.  You come and make offerings and say prayers to each of the four faces of the statue of Brahma.  As part of making a wish, you must state what price you are willing to pay if the wish comes true.  Traditionally, wishers will make some sacrifice or suffer a hardship.

For example, before Tawn took his university entrance exams (in which he had to select which schools he would apply to), he promised that if his wish came true, he would walk all the way home from the shrine (a distance of about ten kilometers).  The most common price to pay is to return to the shrine and hire a troupe of classical Thai dancers to perform for Brahma.

On her first visit two years ago, Trish gave offerings to Brahma and made a wish.  Since her wish came true, she returned to the shrine and hired the dancers.  When faced with the dilemma of how many dancers to hire – four, six or eight – she went for the full troupe. 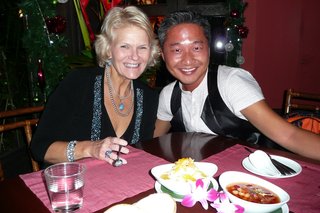 Joining us was Biing, who was also on his final night in Khrungthep.  As coincidence would have it, both Biing and Trish were scheduled on the same flight to Taipei, although Biing was staying in Taipei for a few days as Trish continued back to the US.

Tawn was under the weather and couldn’t join us, but we had a nice dinner at the Jim Thompson Cafe located off Sathorn Road.

This is the same “Jim Thompson” as the silk company, which provided a fitting end to Trish’s trip as she spent a lot of time at the Jim Thompson shops looking at and purchasing silk.

We had an excellent dinner and probably ate too much.  Here’s a look at what we enjoyed: 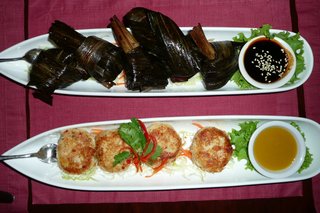 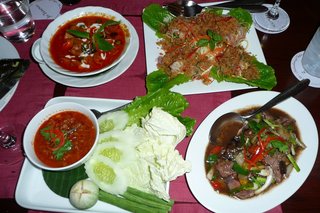 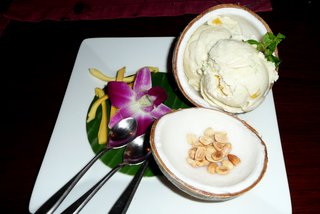 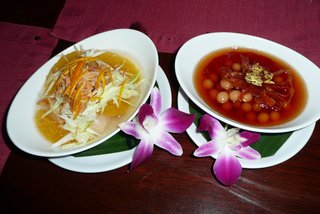 Friday morning before driving Trish and Biing to the airport, Trish modeled some of her finished clothes.  Unfortunately, we didn’t have time to shoot all of them, so she has promised to send me copies when she does her complete shoot in a month or so. 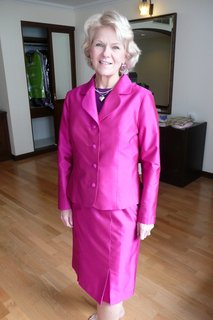 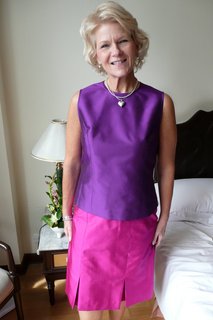 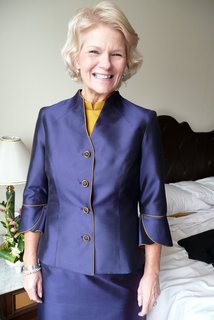 Many people expressed interest in more information about Trish’s company.  As things get up and running, I will share those details with you.

So what’s next?  No sooner has one guest left than more arrive!  Sunday we had lunch with some of the usual suspects plus a trio of visitors from the US, friends of Markus and Stuart.

We had a wedding on Friday night (more about that later), a get together with one of Tawn’s university classmates who is in town from Australia, and I’m busy getting ready for Thanksgiving dinner, which we’ll hold next Saturday.

22 thoughts on “And Trish Heads Home”