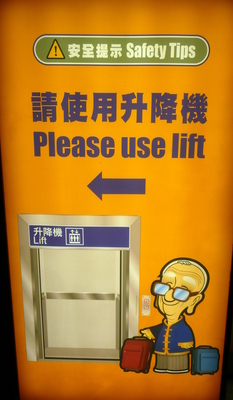 Hong Kong is always a joy to visit, not only because it is familiar to both of us (I lived there in 1998-99; Tawn flew their regularly when he worked for United) but because it is such the polar opposite of Khrungthep.  Khrungthep is relaxed in a “if you don’t get to it today, there’s always tomorrow” sort of way.  Hong Kong, on the other hand, is uptight in a “there’s more money to be made today” sort of way.

And Singapore is on yet a third pole.  Singapore is fastidious in a “why wasn’t this bus stop color coded and alphabetized?” sort of way.”

So if you live in one, one of the others usually seems like a good place to go on holiday.

Right: Large signs at the Hong Kong International Airport encouraging seniors to use the lift instead of the escalators.  I love the happy, smiling grandma.

We’re staying at the Cosmopolitan Hotel, which I learned today used to be the headquarters of the Mainland Chinese government’s “news service”.  I use the quotes because I also learned that the news service was more or less the front for their intelligence agency.  Given how large a building it is, one wonders just how many plainclothes “reporters” they had in their employ.

Below: The view from our room. 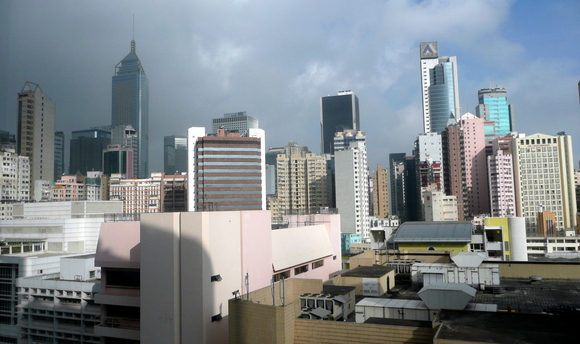 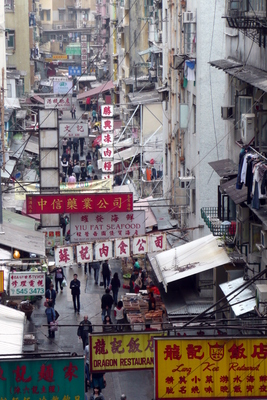 Friday we did some wandering around Central, the Midlevels, and Soho.  There wasn’t a lot to see on Hollywood Road, the antiques and design district.

Left, an interesting photo from the Central escalator, which is a network of moving sidewalks and escalators that bring commuters up from the business district to the Midlevels, a desirable residential district halfway to Victoria Peak.

One thing that really sets Hong Kong apart is the sheer density of people.  There are 6.9 million people in the Special Administrative Region of Hong Kong, a density of 16,470 people per square mile (or 6,407 per square kilometer).

Contrast that to Khrungthep, with 5.7 million people and a density of 9,438 people per square mile (or 3,644 per square kilometer). There’s twice as much elbow room there as in Hong Kong.

Interestingly, Singapore’s 4.5 million people place it just behind Hong Kong as the world’ fourth most densely populated nation, with 16,392 people per square mile, or 6,369 people per square kilometer).  But from my visits there I’ve never felt that it is so crowded.  Maybe the way the Singapore authorities fit everyone into the housing blocks.

In either case, every square inch of Hong Kong seems to be jostling with people.  The area around Times Square, near our hotel, was just a madhouse throughout the day Saturday and into the night, for example.

Below: Tawn poses in front of an out of business restaurant on Staunton Street. 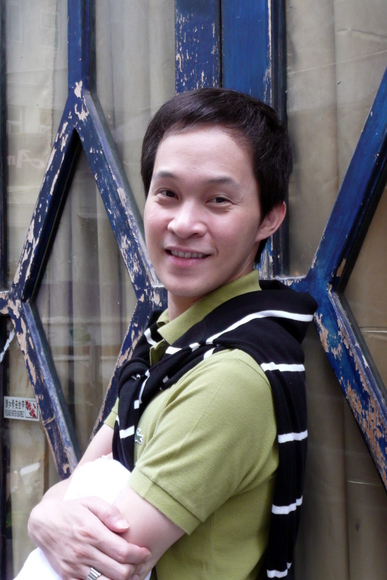 Below: The Lippo Centre, one of the many architecturally interesting buildings on Hong Kong Island. 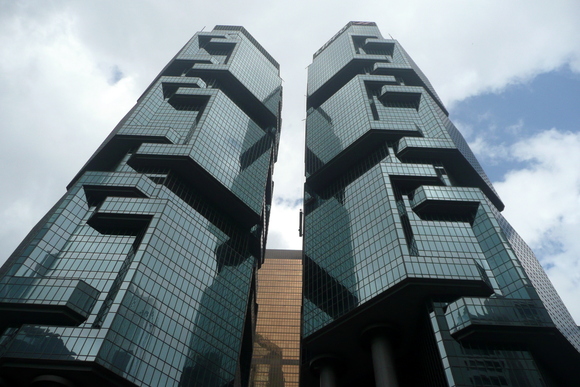 Tawn was feeling under the weather Friday evening, suffering from a recurring pain in his neck (not me) about which I think he will eventually write a blog entry.  He stayed at the hotel and I headed off to Chris and Tehlin’s house on the south side of the island.  Right: Chris and Tehlin.

After visiting with their lovely children, the three of us headed off to dinner at Top Deck restaurant, which is appropriately enough on the top deck of the famous Jumbo Floating Restaurant in Aberdeen, below. 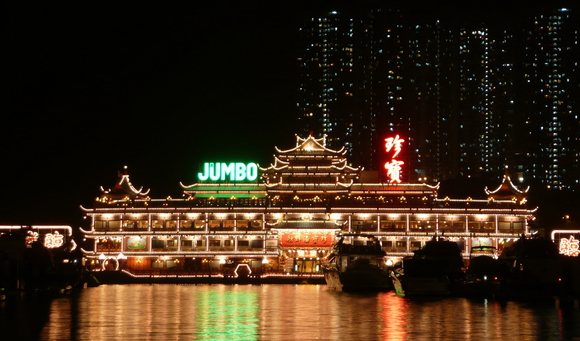 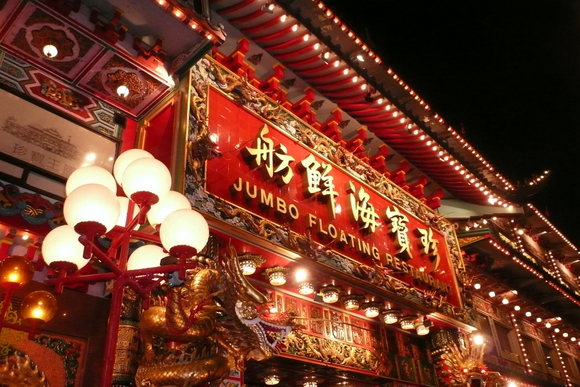 The Top Deck restaurant is run by the Cafe Deco group, which runs Cafe Deco up on Victoria Peak as well as a half-dozen other restaurants.  Cafe Deco was on my list of favorite places when I lived here, and Top Deck retains the expansive international menu and attentive service that I would expect.  The food, however, was just moderately flavored.

I went all beef with a steak tartare maki (sushi) roll for starters, followed by a US filet mignon.  The tartare was okay, nothing spectacular… the filet was tasteless and I had to individually salt each bite to coax any flavor out of the well overcooked meat.  The chef’s definition of medium rare was questionable and I should have thought to send it back but didn’t. 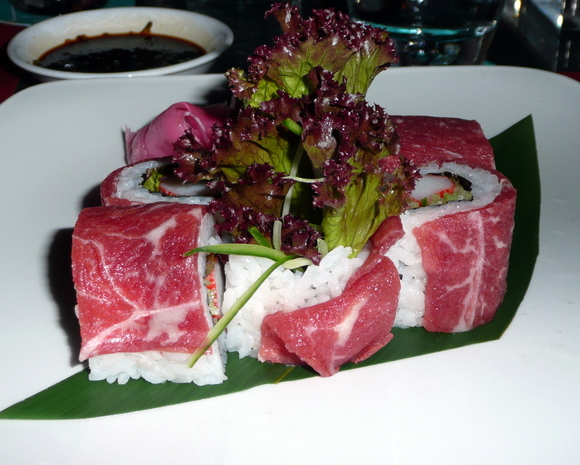 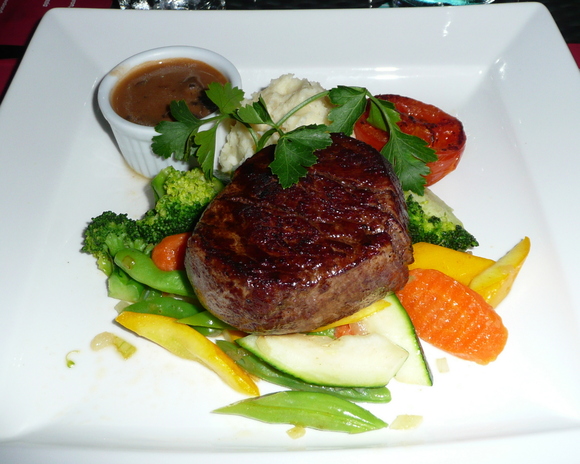 Saturday was more shopping and wandering around on both sides of the harbor.  I wrote some post cards and found quinoa on sale at City Super! market.  The price was quite reasonable, too, at 500 grams (about one pound) for 18 Hong Kong Dollars, or just over US$2.30.

In the evening we met Big Michael in Mongkok, on the Kowloon side of the harbour.  A decade ago, Mongkok was all prostitution and drugs, with a flourishing daylight trade in construction materials on the side.  When I worked in Hong Kong as the opening manager of AMC’s first cinema in Hong Kong, our pre-opening office was located in Mongkok.

These days, with the opening of the Langham Place mall/office/hotel complex more than three years ago, the area has gentrified and has become very popular with tourists and locals alike.  Nonetheless, the Portland Street prostitution businesses remain strong.

Below, lit up like Times Square, is the intersection of Shantung and Portland Streets, just opposite to Langham Place. 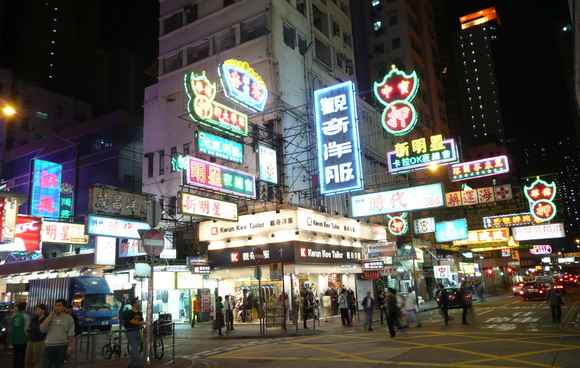 Below: Big Michael holds the camera for a group portrait. 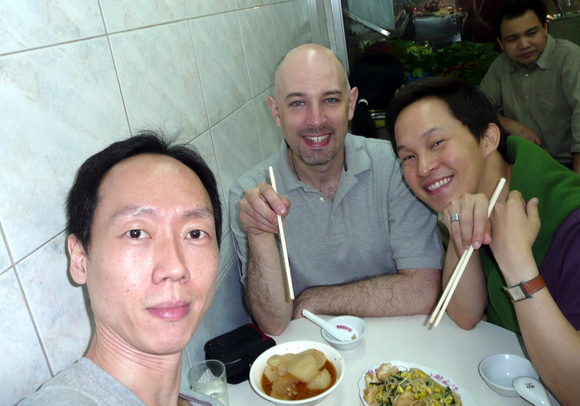 His taste in food always being impeccable, we let Michael do the ordering at a small, hole-in-the-wall, typical Hong Kong establishment with seven tables and the occasional cockroach running around.  But the food was tasty. 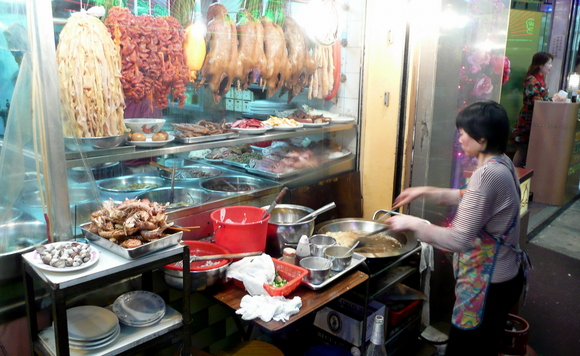 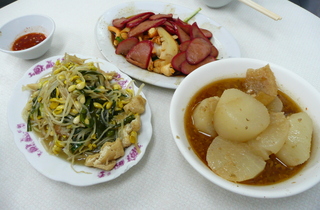 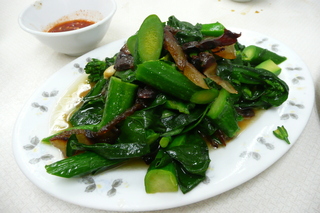 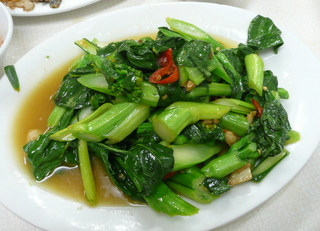 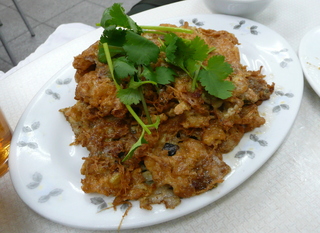 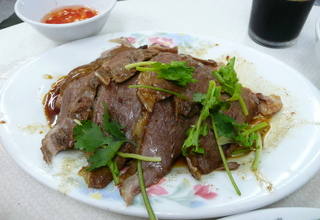 After dinner, we were going to watch Wong Kar-Wai’s new film, My Blueberry Nights.  This is his first English-language film and it stars Norah Jones and Jude Law.  Not knowing when or if it will be distributed in Khrungthep, I was hoping to watch it here.

Unfortunately, we were running late and each cinema we arrived at (two of them), we found the only available seats in the front row of the theatre.  Instead, Tawn and I went to Times Square for some dessert at a popular (line outside) Chinese dessert restaurant, below.

Unfortunately, I do not know its name, but I know where to find it and would be happy to draw you a map if you need to know. 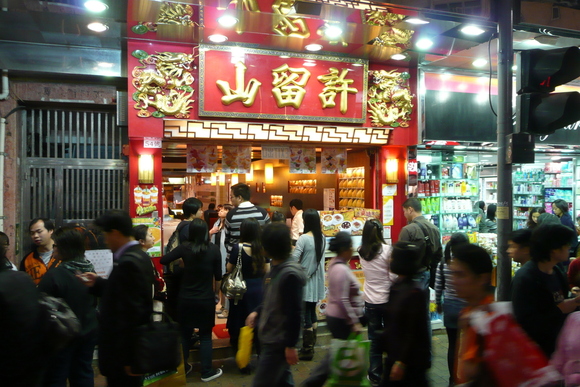 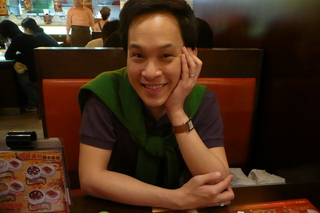 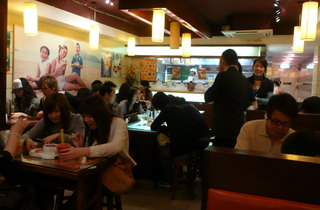 Above: The dessert restaurant’s interior.  Below: A twist on khaw niaw mamuang, Thai sticky rice and mango.  This is Japanese mochi, glutinous rice pounded into a chewy sheet, wrapped around a fresh piece of mango and rolled in shaved coconut. Above: Just like the dessert soups in Thailand, the Chinese soups feature beans, grains, and ingredients like taro served warm and moderately sweet.  In this case, there was a set in which the soup was accompanied by a fried turnip cake.  Somewhat odd as the turnip cake is a very savory item, usually served with dim sum. We concluded our evening walking back to the hotel.  Along the way, though, I was amazed at the large number of people and taxis at Times Square at 11:00 on a Saturday night.