Style note: I’ve become aware that when subscribers receive my entries, if I’ve centered the pictures but left-justified the text, the entire entry – both text and pictures – appears centered in the email.  Because that looks unpleasant, I’m going to stop centering pictures in my entries.  For those of you who read my entries directly on my website, I apologize in advance for all the pictures being left-justified.

Winter finally arrived Sunday morning in Hong Kong.  It was overcast and blustery, and actually cold enough that I had to keep my pullover on all day.  Especially true while we had dim sum at Maxim’s City Hall restaurant, where the air conditioning was set so as to eliminate the need for any refrigerated storage in the kitchen.

Before this, we checked out of our hotel and checked in at the in-city airport terminal, part of Hong Kong’s snazzy Airport Express train system.  I’ve written about this before, and I know there are some other cities that have a very well integrated train to airport system, but I really like how I can check in in Central a full 24 hours before my flight, drop off my luggage, receive my boarding passes, and then go about my day until I’m ready to take the 26-minute train ride on the MTR Airport Express. 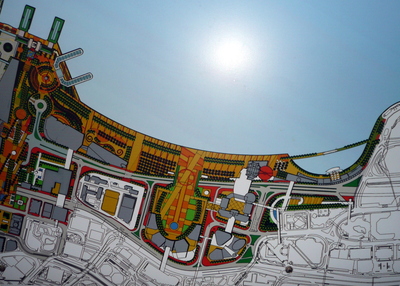 With nearly an hour to fritter away before our dim sum appointment, we walked along the waterfront from the new IFC complex to city hall.

This area is undergoing massive redevelopment as one of the final stages in a decades-long Central and Wan Chai reclamation program that will ultimately open up a world-class waterfront promenade.  The Hong Kong government’s website on this project is here.

Right: Pictures of the proposed redevelopment.  The area above the main east-west road is all land that will be reclaimed from the ever-shrinking Victoria Harbour. 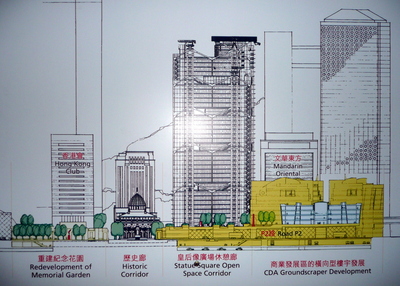 One of the victims of this redevelopment was the closure and demolition of the 50-year old Edinburgh Place Ferry Pier, where the iconic Star Ferry dropped passengers off in Cenral.

Now, the ferry uses the new Central Ferry Piers 7 and 8, built 300 meters further into the harbor which results in a walk much further than that.

Estimates are that as many as a third of the ferry’s passengers will switch to other forms of transportation such as the MTR underground railway, which seems chronically overcrowded throughout the day and night.

Below: A view of part of the reclamation area.  The construction in the foreground of the picture is where the Edinburgh Place Ferry Pier once stood.  The walkway to the new pier is visible in the picture.  The new Central Ferry Piers 7 and 8 are visible in the right of the picture: the white building blocked by a yellow boat-born crane is the main entrance to the piers.  There is criticism that the government’s attempt at replicating the Edwardian design of the original pier resulted in a theme-park appearance for the new one. 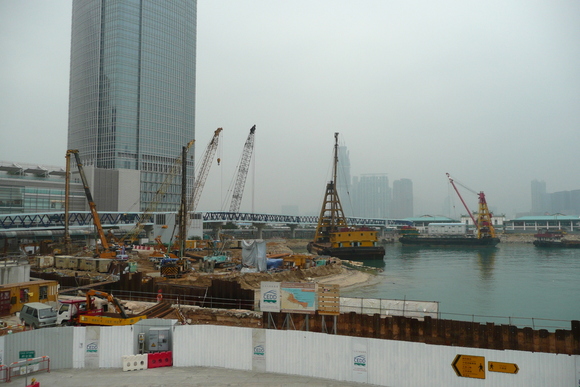 Below: A view of the same area, taken from the pedestrian walkway you see in the above picture.  This picture is looking east towards Wan Chai district and the striking Hong Kong Convention Centre and the construction in the foreground is the site of the former Edinburgh Place Ferry Pier. 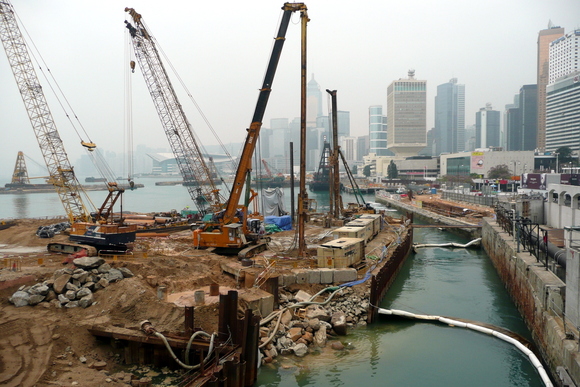 Below: A view of Tawn taken from the top of the car park where I shot the pictures of the harbor.  He looks more and more like his father when on holiday. 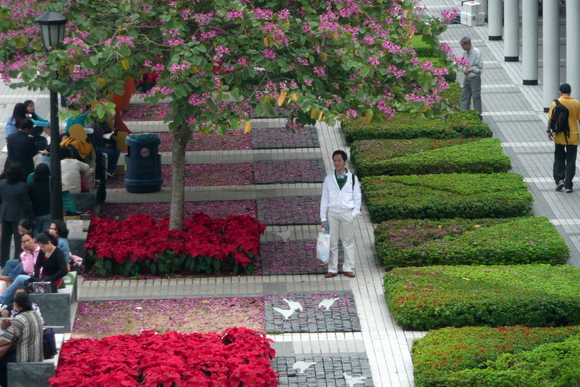 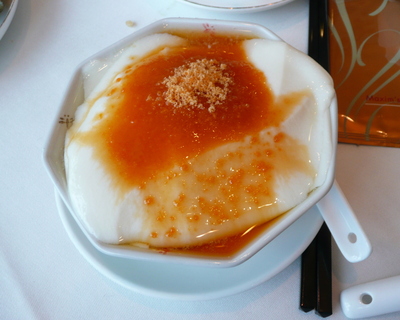 Any of my readers who live in, are from, or are familiar with Hong Kong will undoubtedly have a long list of dim sum restaurants they much prefer to Maxim’s City Hall.  “Cheaper”, “Better”, “Less Crowded” will be heard from those folks.

But the two things I like about the restaurant: a stunning view of the harbor and an ease of finding it when you have a group of people who have varying degrees of familiarity with the city.

Left: Daufufan (did I anglicise that correctly?) – a warm tofu custard served with a slightly sweet ginger syrup with sugar crystals on top.

We were joined by Wai Kin’s friend James, Ryan and Sabrina’s soon to be cousin-in-law Amelia, and my friend from when I lived there in 1998-99 Edward, as well as Chris and Tehlin and their two children.  I like mixing and matching people in a social setting; it can make for fascinating conversation.

Below, Tawn is always a hit with the children.  Sam tries to color Tawn’s cheeks with purple crayon, an effort in which he was successful and which made Tawn all the rosier. 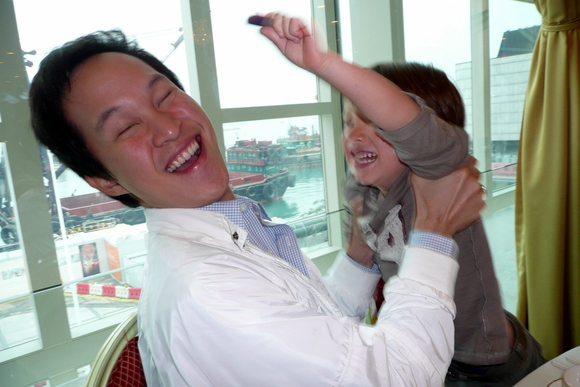 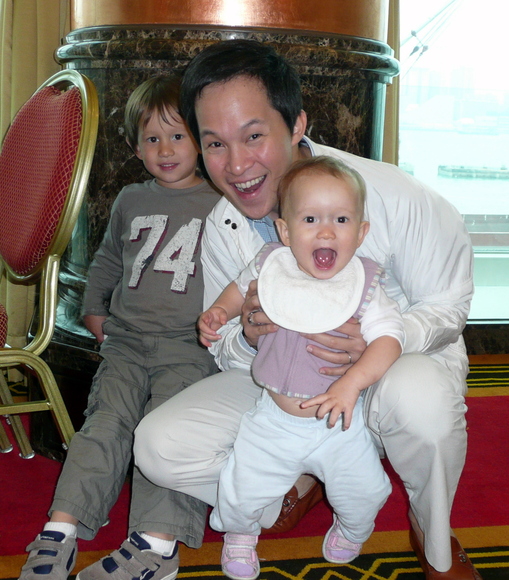 Above: Sam, Tawn, and Isabel hang out at Maxim’s.  Below: Chris and Isabel spend some time coloring. 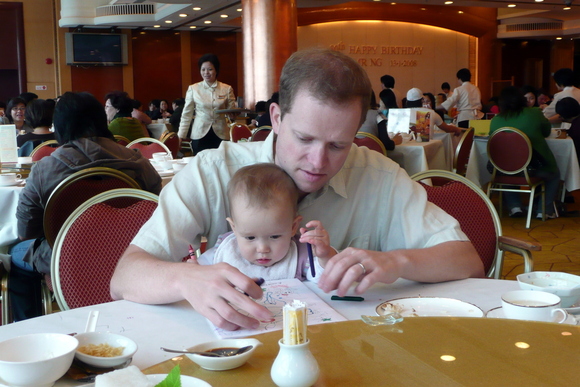 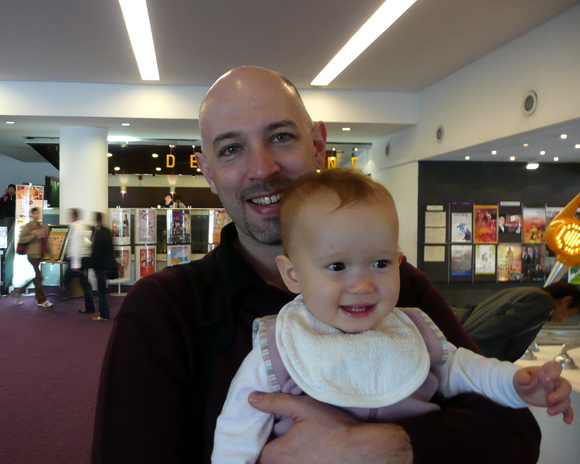 Above: The other Chris with Isabel, in the lobby of City Hall. 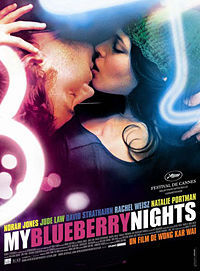 We did finally get an opportunity to watch “My Blueberry Nights”, director Wong Kar-Wai’s first English-language film.  After dim sum we were going to go to Lantau Island to take in the Ngong Ping 360 cable car ride.  But with the wintry weather, which was heavily overcast, we figured the stunning views would be smothered, so instead headed to IFC to see what time the movie was showing.

It being the film’s opening weekend, the show that had just started had seats only in the front row.  The next show time was inconvenient to making our filght, so we took the MTR up to Kowloon station to see if we could catch the flm at the new Elements mall.  Themed after the five elements (metal, wood, water, fire and earth), the mall inexplicably has placed the ice scating rink in the fire zone.  That sounds like bad feng shui to me.

There is a cinema at Elements and they had an upcoming show of My Blueberry Nights with good seats still available, so we killed an hour book shopping and having some tea and pastries at Le Goûter Bernardaud, below. 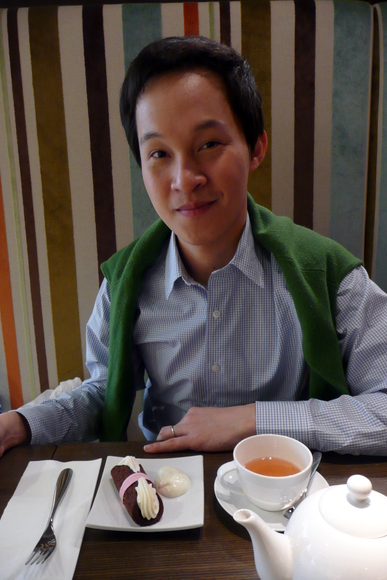 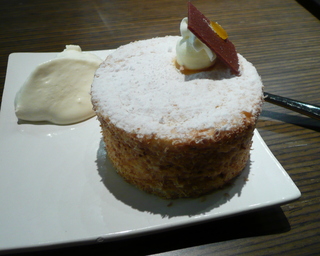 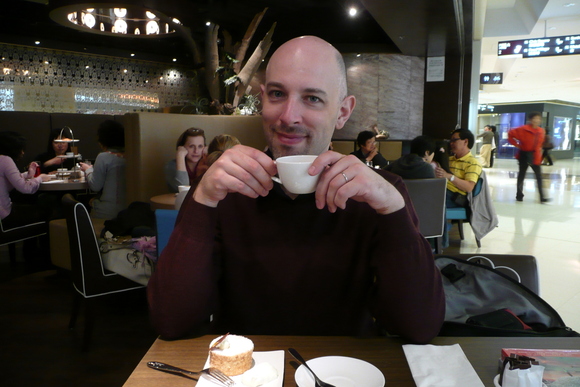 The film was really good with artful visuals and Wong’s signature style imposed on one of the most American of film genres, the road movie.  Norah Jones did a delightful job in her debut film role, Jude Law was charming, and the cast of A-listers who had cameo roles was a testament to Hollywood’s desire to work with one of Hong Kong’s most creative filmmakers.

After the film, we headed up to the airport, with more than enough time to eat a bite (some really good hand-pulled Shanghainese noodles for me) and buy some Krispy Kreme donuts per the request of Tawn’s client at Rolls Royce.

Below: Fun with giant donuts: 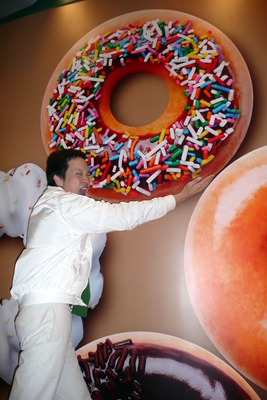 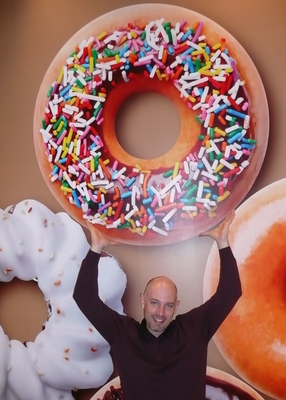 All in all, it was a fun weekend getaway.  After our last trip to Hong Kong, which resulted in us being busily overbooked with social engagements, Tawn and I agreed that the pacing of this trip was much more relaxing.