Sunday, December 23rd the Thai people went to the polls to elect a new government, the first democratic elections since a military-led coup toppled the constitution in September 2006.  The coup government claimed that the coup was held because Prime Minister Thaksin Shinawatra and his Thai Rak Thai (“Thais love Thais”) party were corrupt and had undermined the nation’s democracy.  After an investigation, a court dissolved TRT and banned 111 of its leaders from politics for five years.

From the ashes of the largely populist TRT, which despite allegations of vote buying in previous elections seems to legitimately have the support of a large majority of the Thai citizens, rose the People Power Party.  With obvious connections to exiled Thaksin, PPP leader Samak Sundaravej has made clear that one of the PPP’s planks is 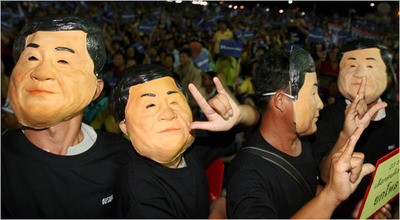 Another plank is to let Thaksin return to Thailand and receive a fair trial.  The implication is that the 111 TRT leaders could be cleared of all charges and return to politics.

How much do PPP members support Thaksin?  This Bangkok Post picture, right, shows them at a rally wearing Thaksin masks.  TRT/PPP has been especially popular in the North and Northeast sections of the country, with Khrungthep forming the crucial battleground for the elections. The 72-year old Samak (left), a crotchety veteran of Thai politics known for berating “irreverent” female reporters, faces off against the rival Democrat Party, led by 43-year old Oxford-educated Abhisit Vejjajiva (right) who was described by The Economist magazine as handsome but ineffectual.

The Democrats, a historically conservative party that is royalist in nature that is the primary challenge to the PPP, has in recent years had a difficult time building any effective support beyond the urban middle class in Khrungthep and the residents of the conflict-torn South.

Thai election campaigns are more about parties than individual candidates.  With the new constitution, each region of the country is given three representative seats so parties have promoted trios of candidates who are generally not notable with the exception of being from a particular party.  We don’t need to know anything about them beyond their profession or the family they’re from.  All we need to know is that they are a member of a particular party.

The party leaders, Samak and Abhisit included, have been the only point where there has been any policy debate.  Most of this has been general and couched in elusive terms.  “We’re for the country and happiness!” could easily be the slogan of any of the seven parties. 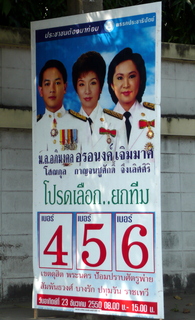 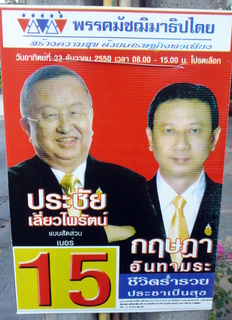 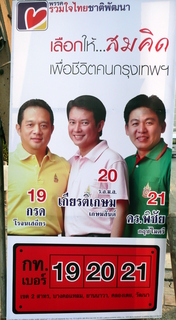 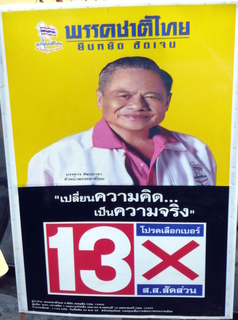 From upper left: “Please vote for all the team members” from the Democrat Party.  Prachai Liawpirat, the leader of the Machimatitapai Party, an entrepreneur who is positioning himself essentially as a new Thaksin.  Ruam Jai Thai Chat Pattana Party (“Thai Togetherness, the Nation Progresses”) puts forth a slate of multi-colored shirts with the slogan, “Choose as you think best, for the life of the Khrungthep residents”.   Chart Thai (the #3 ranked party) leader, Banharn Silpa-archa, who is known by his nickname “Tung” referring to his passing resemblance to Mao Tse Tung.  Tung actually is a key player here, which I’ll talk about in a moment.

The only campaigning that was really interesting was that put up by Chart Thai’s Khrungthep candidates, who are really emphasizing their youth and being part of a new generation, fed up by the past.  Their posters, four of which I’ll explain below, are really funny. 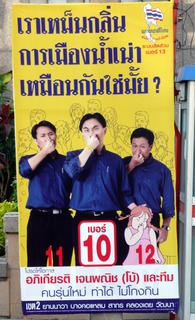 Left: “We smell the bad smell of “polluted water” politics.  Do you also?”  The line drawing behind them show a crowd of people holding their noses, too.  The expression nam naw refers to the polluted water that are underneath slum houses, for example along a khlong.

The expression is used idiomatically to mean someone or something that is overly dramatic for no purpose.  For example, soap operas on television are called lakon nam naw – literally, “polluted water show”.

The funny event in all of this is that Tung, the leader of Chart Thai, was on a campaign stop in a slum area in Bangkok and the floor collapsed under him and he literally ended up in the nam naw.  This led to all sorts of jokes that he, too, had been tainted by the bad smell of polluted politics.

The last laugh will be on Tung, though, because unless the PPP or the Democrats get a significant majority in the elections, they will need to form a coalition government and Chart Thai is running third in the polls.  As was pointed out after the nam naw incident, Tung might be smelling bad now but after the elections, the other parties will be coming up to sniff his cheeks. 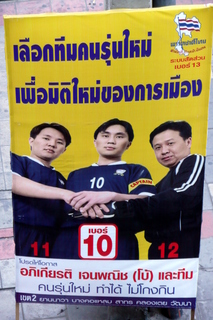 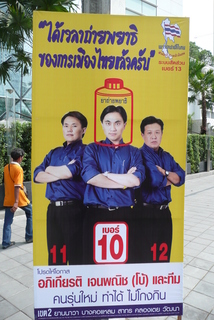 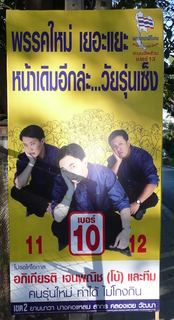 Left: “Choose the team of the new generation, for the new era of politics” featuring Apikiat “Bo” Janpanit (#10) as the “captain” of the team, a perfect allusion in this football-mad country.  Center: “Time to take out the political tape worms” with an image of a tape worm medicine bottle superimposed over Apikiat’s face.  Right: “Too many new political parties, but the old faces again?  Young people get bored.”  Despite #12’s looking like he isn’t part of the young generation, Chart Thai is trying to drum up support among the younger generation.

The polls closed at 3:00 in the afternoon and three different exit polls are indicating that the PPP has won the largest segment of seats in the new parliament, although by how much is the question.  One poll puts their lead at 256 of the 480 seats, to the Democrat’s 162.  Other polls show the margin narrower.  If the PPP does get around that many seats, they may be able to form a government on their own.  But if their margin is narrower, they will have to form a coalition, which could lead to instability.

Either way, there is no doubt that the political turmoil will continue.  The current government was making overt efforts to discredit the PPP’s campaign before the election, including raising questions about vote buying and the inappropriate appearance of a campaign VCD distributed in the north with a message from Thaksin.  This looks like groundwork to potentially invalidate the election results afterwards.

In the past two weeks, the King has publicly appealed to the nation no less than three times – a rare excess of appearances – asking for unity in this difficult time.  It will be interesting to see if his subjects pay heed to his request.

One thing is certain: stay tuned over the months to come for more political uncertainty.