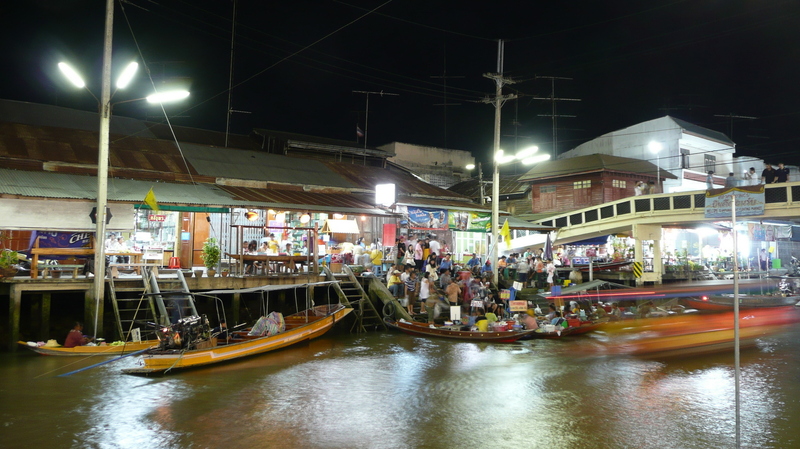 Friday night I drove Bill and his mother, Pat, to Samut Songkhram.  Ken joined us.  Bill is an American from Florida who has a Thai partner, Kom, and would like to move here.  There seems to be some challenge in balancing his responsibilities back in the United States with his desire to live here.  Right now, he’s in the midst of a several-month stint here of which is mother has joined him for one month.

Unfortunately – and not to disclose too much personal information but this is relevant to the story – on her first day here, Pat had a mishap with a water feature in the lobby of the Marriott Mayfair on Langsuan Road.  Thankfully, the injury was not as severe as it could have been, but it has limited the amount of travel she has been able to do.

I offered to take them to Samut Songkhram province because there is an evening floating market at Amphawa.  This is a much more local market held only on the weekends, and it has many fewer steps, is less physically demanding, and it is much less touristy.  Or, at least, much less geared towards foreign tourists. 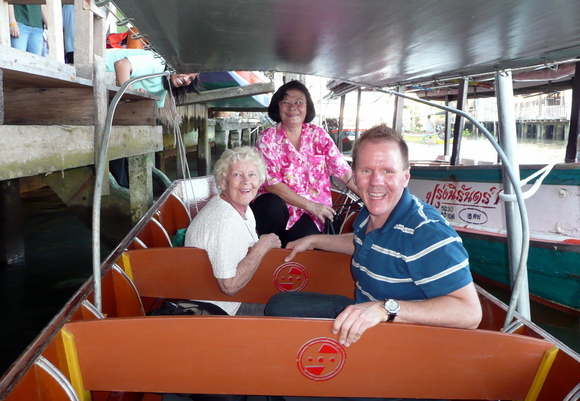 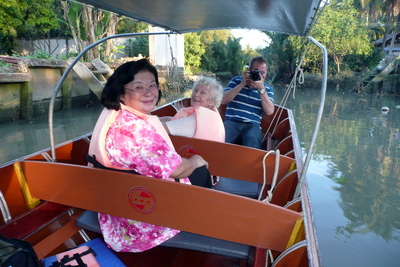 We met up with Ajarn Yai and then proceeded to the market, which was just getting started when we arrived about 4:30.  Despite her unsteady legs, Pat agreed to a boat tour so we spent about an hour heading up river on the Mae Khlong and then turning in on a smaller canal that led back to the main market.

Unfortunately, it was low tide and our boat ran aground in the shallows of the khlong.  (right) Pushing with a stick wasn’t sufficient so our driver had to roll up his pant legs and get into the water, which was knee deep.  The theme to “Gilligan’s Island” kept playing in my head.

Along the way, Ajarn Yai recognized a colleague so we stopped for a few minutes and visited.  Then, back at the market, we ran into one of our former students, Wanwisa, who had graduated sixth grade last year and is now a student at the secondary school located next to the market.  We ran into yet some more colleagues of Ajarn Yai’s later in the evening, reinforcing that this really is a local attraction. 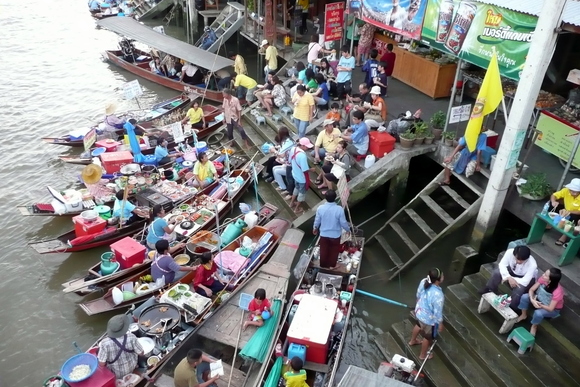 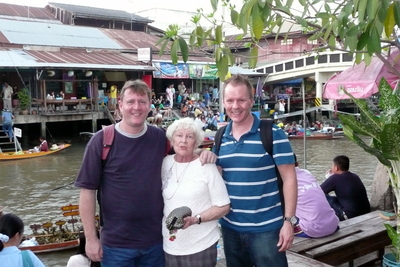 The market gets busy as the sun sets, with vendors serving mostly food and snacks to people sitting on the steps, above.  There are also some khlong-side restaurants, which is where we set up for dinner and where I took the picture at the top of this entry.

Left: Ken, Pat and Bill standing along the canal after our boat ride.

There is no shortage of good food in Amphawa, although I think some of the dishes were a little spicy for Pat’s taste.  That’s understandable, so we ordered a big plate of khaw pad goong – shrimp fried rice – to fill everyone up.  Sorry, no pictures of that!

We strolled for a little while afterwards, looking at souvenirs and desserts.  One Thai woman who spoke beautiful English – it sounds like she was educated in the UK or Australia – stopped me and asked where I was from, to which question I responded without thinking in Thai.  Ma jag phratet America khrap.  I am from America. 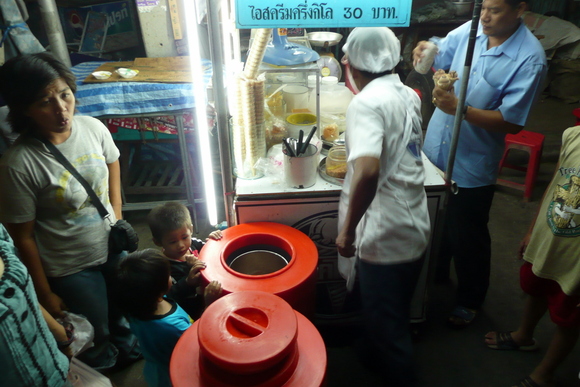 Strangely, she said how she never sees any foreigners there.  Strange, I say, because while there aren’t many, I had seen at least a half-dozen others over the course of the early evening.

Our finally stop before heading home: ice cream!  The ice cream vendor (right) was busy, offering both chocolate and coconut flavors, in a bowl, on a cone, or in a sweet roll.  You could have it with chocolate syrup, evaporated milk, corn, sticky rice, or beans.

And two little boys looked on, oh so eagerly.  “When will it be my turn?  When do I get my ice cream?” they seemed to ask.

Other random photos from the week

Here are some other pictures from this week in Khrungthep: 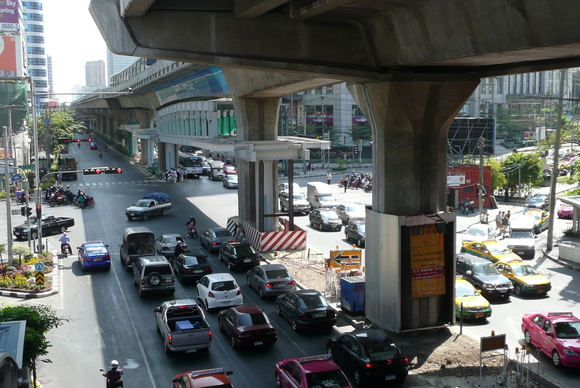 Above: The pedestrian bridge over Asoke Road along Sukhumvit has been put up.  Still several months of work to do, but eventually we’ll be able to connect from the Asoke BTS station to the Exchange Tower building on the southeast corner.  Below: Khruu Kitiya smiles for a photo after class. 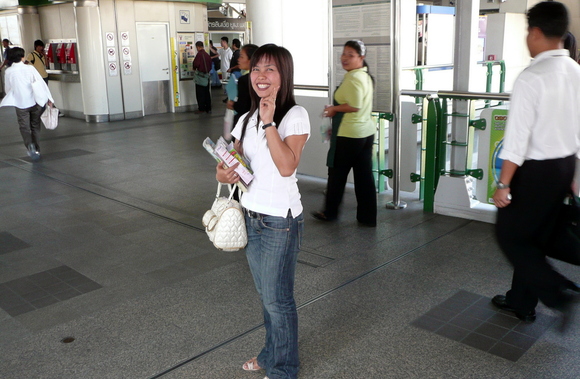 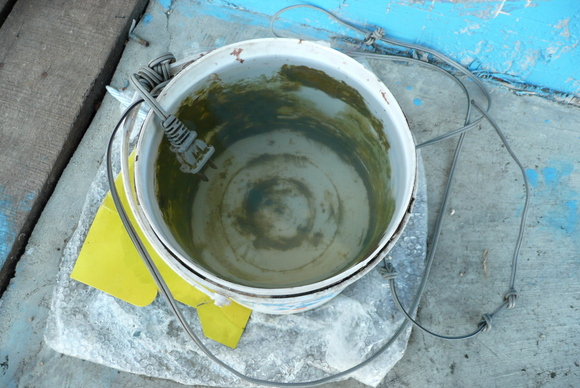 Above: Two things that don’t mix, electricity and water, are mixed on the sidewalk here in Thailand.  A bucket of water sits with an electrical cord running into it.

4 thoughts on “Another trip to Amphawa”