Another week has been zipping by – I can’t believe it is Thursday already!  What happened to the days of my childhood when weeks were agonizingly long and time passed by like molasses in January?

These past three days have all been about work with several projects competing for my attention.  It is difficult when all of your internal customers are convinced that their project is the number-one priority.  At least it provides a bit of job security.

Here are some pictures taken over the last week that I haven’t had an opportunity to share yet:

Our condo has two balconies.  The one facing the southwest is small and functional, enough room to set up laundry racks but nothing very special as it just hangs from the side of the building.

The other balcony faces the northeast and is one of four building corners that overlook the pool and deck area.  Being by the pool is very nice.  There is the sound of swimmers, children playing in the afternoon, and at least one mother tutors her child in English by the pool. 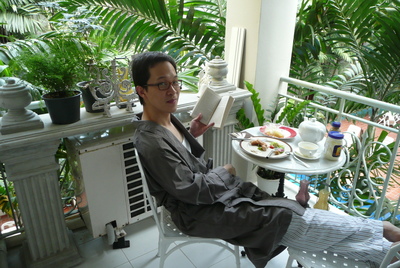 The balcony also is shaded by several palm trees and Tawn has set about turning it into a cozy place for outdoor dining and relaxation.

He’s added this concrete console that I think looks a bit overbearing, but that serves as a nice place to put plants, candles, and plates of food.

There is a marble-topped cafe table with a pair of chairs, and we’ll eventually add a ceiling fan and light so that on breeze-less evenings we can still sit in comfort outdoors.

So far we haven’t had too much of a problem with mosquitos.  Hopefully it stays that way.

We live along a small soi that is actually surprisingly busy in one direction because it serves as a shortcut to bypass the Sukhumvit – Thong Lo intersection.  This can be a little frustrating but since the street is small, traffic moves pretty slowly and doesn’t make a lot of noise.  Unlike as Asoke Place, we don’t have a lot of traffic-related dust.  There, even though we were on the 25th floor, it only took a few hours of the windows being open to have a heavier, sooty type of dust coating things, probably due to the busses and trucks on the busy street below.

Soi 53 is very walkable, although I enjoy taking the motorcycle taxis up and down the soi for the feel of the wind in my hair.  Along the way there are many interesting condos, houses, spas and restaurants. 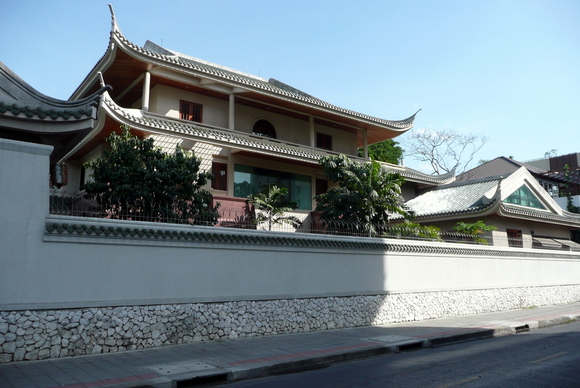 The most interesting of them is this private residence in a North Asian style that I have not decided on yet.  Is it more Chinese, Korean or Japanese in style?

Located on the corner of Soi Sukhumvit 53 and Soi Thonglor 5, there is no signage indicating what it is or who lives there.  At first I thought it was a consulate or embassy, but if it were, it would have a sign.  It is a very nice looking house, though. 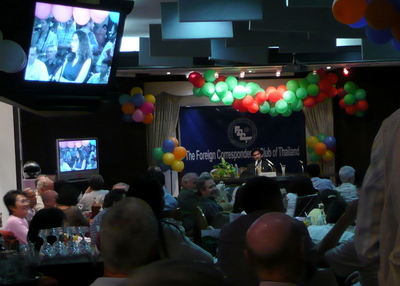 Tuesday evening I went to the Foreign Correspondents’ Club for a speech and question-and-answer session by Abhisit Vejjajiva, the head of the Democratic Party of Thailand.

The oldest of Thailand’s political parties (61 years), the Democrats are the main rivals against the PPP (People Power Party), which is basically the now-disbanded Thai Rak Thai party that was run by deposed Prime Minister Thaksin Shinawatra.

Khun Abhisit is only 43 years old, UK born and mostly educated there, and represents a new generation of Thai politicians, a generation that claims to be a break from the corrupt politics of the past. 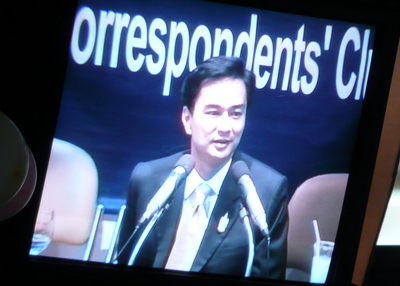 It was very interesting listening to him: unlike most politicians I’ve heard (from any country) he is very articulate, has a specific plan of action for his party, and when asked even very pointed questions, he actually answers directly.

Whether or not he’ll have the opportunity to become the next Prime Minister is an open question.  Various polls show the PPP poised to take a majority in the new legislature and thus able to form their own government.

But Thai politics are nothing if not full of surprises.  So we’ll just have to wait and see how things turn out.  There is more that I’ll write about the upcoming election (this Sunday, December 23) that will mark the Kingdom’s return to democracy, over the next few days.

Finally, here’s a shot taken just after sunset from the lobby of the FCCT, looking east along Phloenchit/Sukhumvit towards the Central Chidlom department store.  This was a time exposure taken for three seconds.  The sun had actually already set but over three seconds, there was enough light to make it look as bright as it does in this picture. 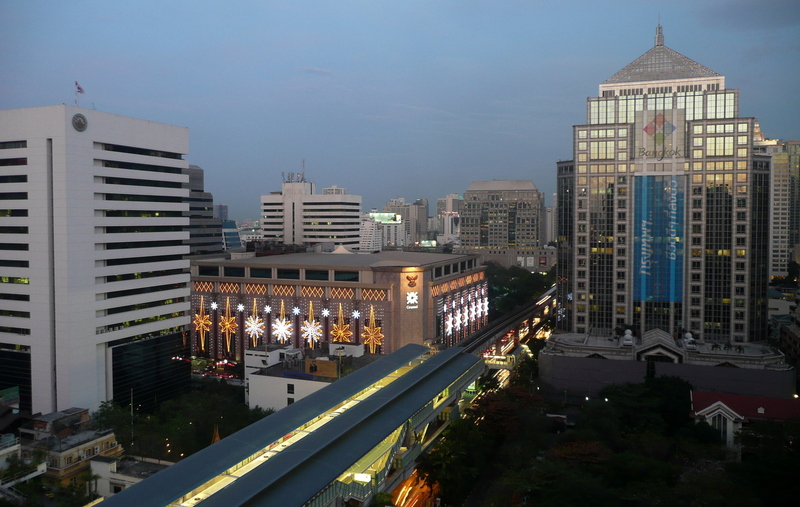 5 thoughts on “Khun Abhisit at the FCCT”