The last Friday of the month: payday for nearly everyone in Thailand.  Flush with money and full of a desire to spend it, Thais take to the streets and go to the shopping and entertainment districts.  Roads, especially ones like Asoke that lead up to the Ratchadapisek entertainment area, are packed from early until late.  Malls and shopping centers stay open late for heavily advertised midnight sales complete with live entertainment providing everything from swing bands to DJ-spun electronica. 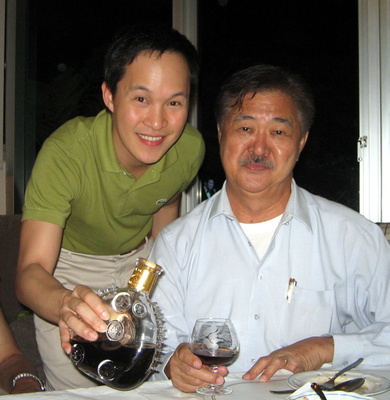 Tawn returned to his parents’ house to celebrate his father’s birthday, which is this coming Sunday.  I’ve mentioned before in these pages that Tawn’s father has a very tenuous relationship with me, best described as “don’t ask, don’t tell” or maybe, “if I close my eyes really tight, maybe when I open them again this nightmare will be over and the farang will be gone”.

But, deep down inside I think he really does show some signs of caring.  It may be more because he loves his son and wants him to be happy.  Last week when I was sick Tawn was invited home for dinner.  He told his father that I was ill and his father responded, apparently without sarcasm, “Yes, you’d better go take care of him.”

Left: Tawn serves his father a glass of cognac that Khun Sudha uncorked Friday night after saving it for twenty years.

I asked Tawn to wish his father a happy birthday from me.  He said he would, but I always wonder if he actually says, “Dad, Chris wishes you a happy birthday, too” or not. 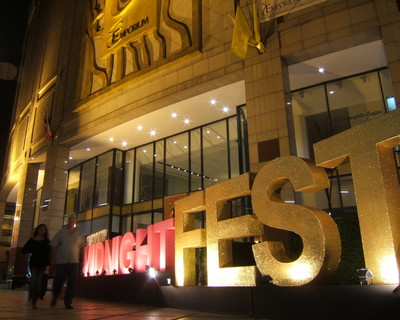 While Tawn was at his parents’ house, I ate a bite of dinner at home, did some exercise (30 minutes of yoga using a Bryan Kest DVD), and then headed to Emporium to watch Fracture, the Anthony Hopkins and Ryan Gosling film.  While it is a good film and a fine performance by Sir Anthony, the conclusion of the movie was a little too neat.  Wouldn’t it have been so much better if, unlike the typical American film, it was left a little unfinished?

Anyhow, when I exited the cinema at 11:30 I was surprised to find that the mall was still busy.  It hadn’t really occurred to me, despite the 2-meter tall sign in front of the mall, but this midnight sale stuff is really serious.  Since the supermarket was open, too, I picked up some groceries before heading home.  So convenient!

Saturday morning is a meeting with Ble, our designer, and his contractor.  Hopefully we’ll make some progress on this condo redesign.