Last July the new Suvarnabhumi International Airport opened about 30 km east of Khrungthep.  The Bangkok Metropolitan Authority anticipates that the high-speed rail line from the city center to the airport will be open sometime in mid to late 2008.  No surprise there.

The train’s path pretty much parallels an existing rail line that runs along Petchaburi Road.  There will be a large inner-city terminal just a long block away from us, where Asoke and Petchaburi meet.  This should be equivalent to Hong Kong’s Airport Express station that allows people to check in for their flight right in the heart of Central.  They can even check their luggage there and it is transported securely to the airport and processed just as if they had actually checked in at the airport.  The airport line will connect with the subway at that station, and then will continue west to meet up with the Skytrain at Phayathai station, near Victory Monument. 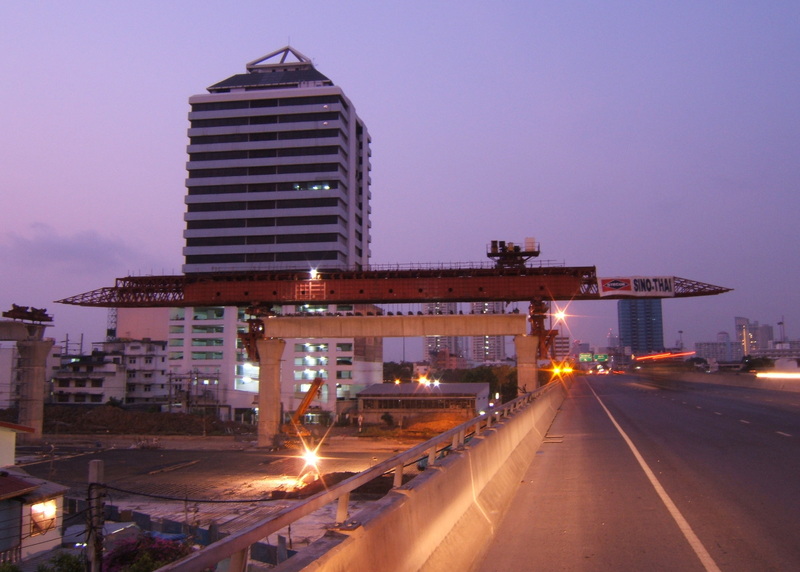 The airport line will be an express train, promising 15 minutes from the city to the airport.  There will also be a local service operating along the same line, and the Soi Soonvijai station will be built very close to Tawn’s parents’ house, about a 3-minute drive or a 10-minute walk away.  Over the past six months as we’ve driven to and from the in-law’s house, we’ve seen piles being driven, pillars being poured, and other work being done.  But the area immediately around the Ekkamai Road flyover (which crosses the train tracks and a canal) hasn’t had any work done.

A few days ago Tawn reported that the construction had finally reached the flyover.  Knowing that the flyover will never look the same again, I wanted to get some pictures.  Before heading down to school on Wednesday morning I drove over to Ekkamai, parked on the shoulder in pre-sunrise traffic, and took some pictures.  They aren’t perfect, but at least they document the changes.

The construction process is fascinating.  There are about twelve individual hollow concrete sections between that are combined to form the viaduct between each pillar.  This enormous crane-like structure extends out from already-built section of the track and hoists new concrete sections into place.  How they are fastened together, I’m not sure, although I see that there is some re-bar that connects the sections.

Anyhow, it should be really nice for Tawn’s parents.  They live far enough off the main road that they shouldn’t be inconvenienced by the new station or any noise, but close enough to benefit from increased property value.

And of course, I’m just excited because I love civil infrastructure projects like this!  What an urban planning geek I am.