Saturday afternoon after a morning of running errands I headed home and Tawn picked up his mother from her home.  Typical of many Thai housewives, Khun Nui doesn’t get out and have as much fun as she’d like, instead staying at home and running the household.  So on occasion we try to spirit her away so she can have some fun without Tawn’s father!

First stop was our apartment, where she sampled some homemade banana bread.  Then after visiting for a while, we caught a taxi over to Basillico restaurant on Sukhumvit Soi 23.  Having lived for two years in Italy way back in the years before Tawn’s birth (that would be, what, about sixteen years ago?) she is very much in her element in an Italian setting and can still speak proficient Italian. 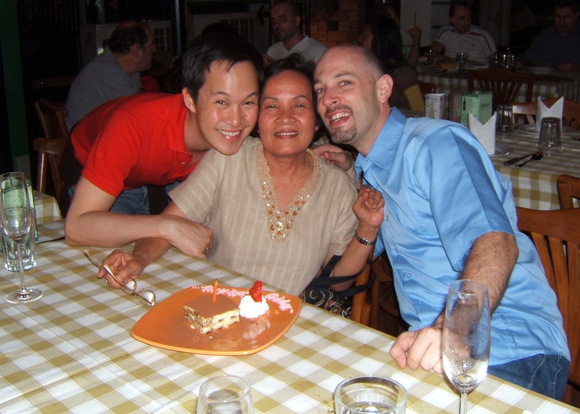 We ordered a bottle of prosecco and after not even half a glass she was tipsy.  A plate of prosciutto and salami came and went, then a bowl of ham and pea risotto followed by a thin-crust pizza.  She started to flirt with the Italian chef who was making pizzas in front of the wood-fired oven smack dab in the middle of the room.  “Bravo!  Bravo!” she shouted each time he tossed another pie in the air.

Three times the lights dimmed, a birthday cake with blazing candles was accompanied to the celebrant’s table with a host of off-key waiters singing the Thai version of “Happy Birthday” which is like the American version only to a slightly Salsa beat.  The fourth time the cake arrived at our table, surprising Tawn’s mother whose birthday is this coming week.

Needless to say she was not only tipsy but very happy.  Tawn took her home in a taxi while I walked back to the apartment.  Once home, Tawn ended up having a very long and very good heart-to-heart conversation with his father, not arriving back until 2:00!  Then he proceeded to tell me about the very long and very good heart-to-heart conversation, which is why I am now awake at 3:00.