What in the world happened that it took a card more than two months to make it from Kansas City to Bangkok, let along the nearly six weeks it took for Ryeroam’s card to get from Paris to Siam?  Normally, it takes between a week and two for letters to get to and from the United States.  The best I’ve yet to see if five days.  If only there were a tracking number so I could figure this conundrum out. 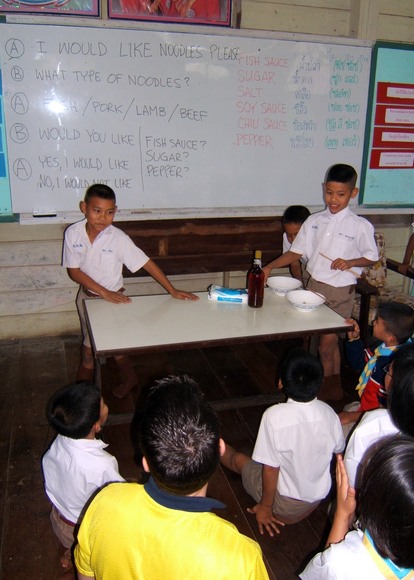 The results were mildly impressive: while their attention spans, especially those of the boys, still are infinitesimally small, they were at least more awake.

In fact, we are in the unit where we begin to learn about food so we learned vocabulary around noodles and then played “noodle stand.”  Students took turns playing vendor and customer, ordering bowls of noodles with chicken, fish, pork or beef and being asked what condiments they would like: sugar, chili sauce, fish sauce, or salt.  We had some props from the kitchen which made it a bit more interesting, especially when one of the boys discovered that the bottle of fish sauce leaks a bit when you turn it over to “add” some to the bowl.

After class, Ajarn Yai and the other teachers took Tod, Markus and I out to an early dinner to thank us for our contributions during Children’s Day, a perfect example of grangjai – a very Thai concept.  We did something that was perceived as unnecessary, resulting in the Thais having “grangjaied” us – troubled us – and as such they need to do something to make up for that trouble.  Never mind that Tod and I gave of our own volition and free will, there was still a debt to be settled and a free meal settles debts quite nicely.

Except that all three of us were absolutely stuffed and said as much both before going to the restaurant and while Ajarn Yai was ordering.  Nonetheless, we ended up with a volume of food that was just downright too much: after eating past the point of comfort, grilled prawns arrived.  After that, two large steamed fish arrived.

So I haven’t eaten in two days.

Last night Tawn and I went to watch “King Naresuan” the first installment of a 3-part historical epic that picks up where director Chatrichalerm Yukol’s 2001 film “Legend of Suriyothai” left off.  It was two hours, forty minutes long and the version with Thai subtitles doesn’t open until next week.  (Which is odd because that will result in the distributor having to strike extra prints since the film is already playing at nearly every theatre in the Kingdom, resulting in unnecessary additional expense.)  So I had an extra Thai lesson: listening to more than two hours of pasathai boran (“old” Thai, similar to listening to the Thai version of Shakespearean English).  I was pretty mentally bashed by the time that ended!

Today there is construction work going on in a neighboring apartment.  I can’t tell if it is above, below, or next door but the demolition work is quite noisy.