The crisp buttery crunch was followed by the nuttiness of the buckwheat. Every bite that followed was comforting and hearty until the last bite, after which I was left satisfied but a bit sad. Such was the story on both of our meals at Breizh Cafe, a popular cafe in the 3rd arrondissement that produces succulent galletes – buckwheat crepes from Brittany – in a cozy, international setting with friendly service and, somewhat unusual in Paris, nearly a “no reservations” policy. 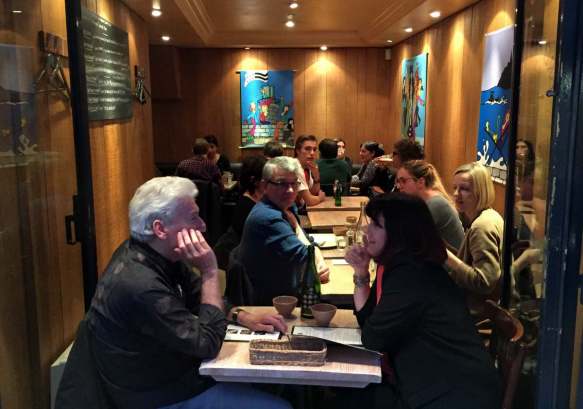 The branch of this cafe in Le Marais, a district full of beautiful buildings and charming restaurants and shops, is cozy with tightly-packed indoor seating and a handful of tables on the sidewalk.

Reservations were accepted for the following day when we arrived late and could not wait, but for the most part it is a first-come, first-served basis. The service is efficient, though, so waits seem mostly tolerable. The staff is welcoming and is happy to speak English, although they were quite patient with my broken French.

In addition to crepes, they offer a range of ciders (available in the traditional bowl) as well as smoked sausages of various types. These made a lovely appetizer and I badly wanted to buy some from the next-door shop to take home. 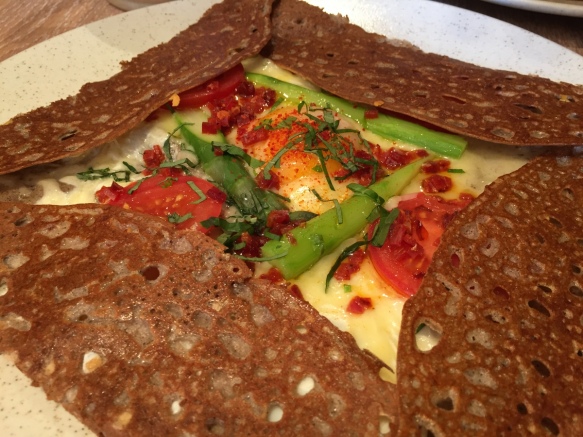 The main courses, a fixed menu plus some seasonal specials, are all the galletes – the buckwheat crepes that are surprisingly filling. The portion size is enough for one person, although you will be hard-pressed not to share! What I particularly enjoyed about Breizh was that they make the crepes nice and crisp. The texture adds such a nice contrast to the cheesy fillings. 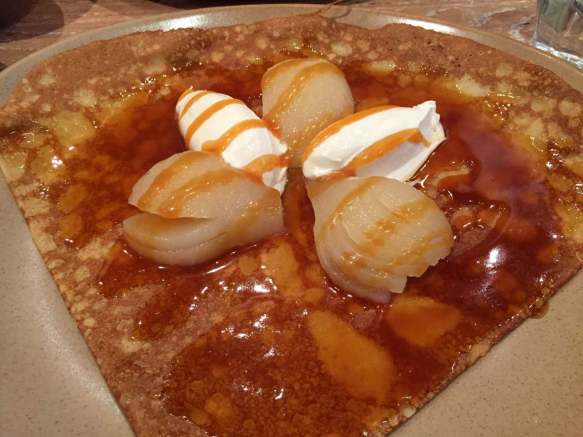 Desserts are made from wheat flour so they are lighter. This was a pear with salted caramel sauce. The neighboring show sells the caramel sauce and homemade salted caramels from Brittany. (Several tins of which made it back with us to Bangkok!)

This is definitely a must-visit, so much so that I ate two meals there on this trip.