While visiting family in suburban Johnson County, Kansas, I decided to put my jet lag caused early awakening to good use and go buy some donuts. A few minutes of internet research later, I settled on John’s Space Age Donuts. Located in downtown Overland Park, John’s looks exactly as you would expect for a shop that’s been in business since 1967.

The dining room has a U-shaped counter with seating on the two legs and display cases across the front. With a large door between the kitchen and dining areas, the place reeks (in a good way) of oil and deep-fried dough. Service is brisk but friendly and the selection is broad, although they didn’t have the blueberry donuts that niece number two requested, so we settled for raspberry. 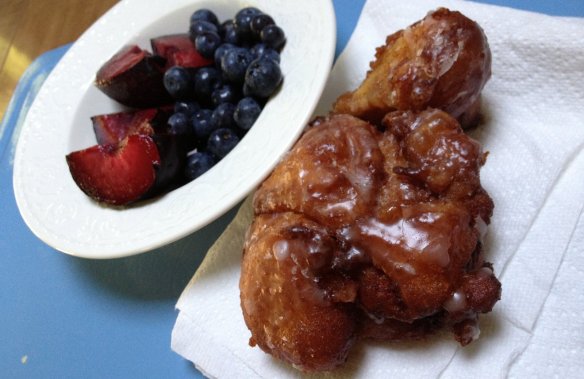 The donuts were still a warm and very surprisingly tasty. They are dense donuts, but neither soggy with oil nor undercooked and doughy. The apple fritter, pictured above, is a masterpiece with a crispy exterior, moist interior, and plenty of apples. 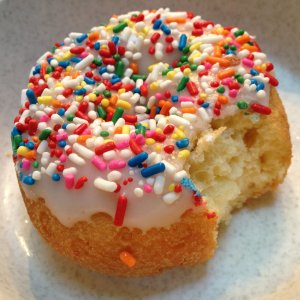 The cake donuts are nice, too, and the dough itself was flavorful. Even unglazed, these donuts would be a pleasure to eat. Unlike some donuts (think Krispy Kreme) that seem to expire within a few hours of baking, these were still fresh when we finished the remaining ones the next day. Must be some of that space age technology!

While I am not the biggest donut fan in the world, it is a sure bet that I will be back to John’s Space Age Donuts next time I am in Kansas City.