Turning away from the politics, the Xanga fundraiser, and all that serious stuff, I just wanted to share with you two pictures of Bangkok taken the past few days. This isn’t a particularly pretty city, but these two pictures do manage to capture the city’s nicer side. 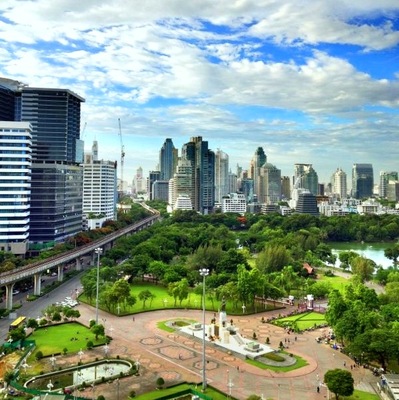 Taken by visiting Singaporean friend David Chein (follow him on Instagram at davidchein), this is a view of Lumphini Park taken from the Dusit Thani Hotel. On the left side you see the Silom Skytrain line running past the headquarters of the Thai Red Cross. In the distance are the upscale hotels and offices in the Ratchadamri neighborhood. In the foreground is the statue of King Rama VI, which sits at the corner of Rama IV and Ratchadamri Roads. We have had strong winds the past few days so very little haze. 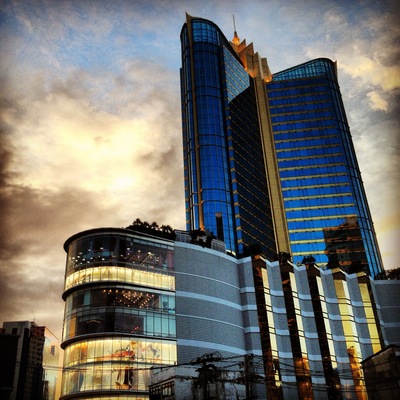 Late yesterday afternoon, I took this picture of Terminal 21, a mall, office tower, and service apartment complex located at the corner of Asoke and Sukhumvit Roads. With the setting sun behind it, the building took on a glow that looks just like a computer illustration. It was a real photo, though!

Pictures like this remind me that while Bangkok can be a bit scruffy sometimes, there is still beauty to be found.