Half a world away, I have read, watched, and listened to the debate over gun control in the United States, dismayed by the rhetoric and disturbed at how two hyperbole-fueled extremes frame the discussion. That distance, I hope, has made it easier for me to step back and consider the subject. 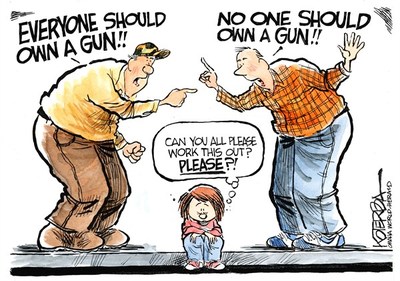 As an attempt to add my two cents’ worth to the public discourse, I would like to share some conclusions I have reached. I do not expect everyone to agree with me and I welcome constructive comments. Just a forewarning: comments that are not constructive, that rely on name-calling or otherwise do not contribute to a civil discussion, will not be entertained.

Many of my friends and family members are gun owners and people who enjoy guns recreationally. While my first-hand gun experience ended with BB guns in late primary school, I recognize the appeal of guns and do not think that guns are inherently bad. 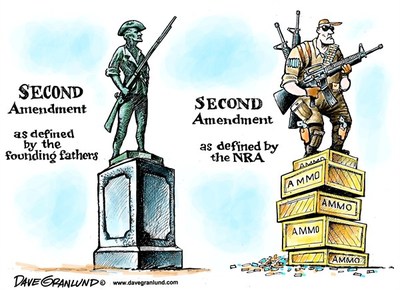 I think we need to look at this discussion through the lens of “gun safety.” Our individual right to bear arms must be balanced with the right of all people to life, liberty, and the pursuit of happiness.

The Second Amendment clearly states that people have a right to bear arms. Our courts have already confirmed several abridgments to those rights, though, for example limiting the types of weapons you can own (no nuclear or chemical arms – too many innocent bystanders harmed when you use them to protect your life or property).

Legitimate limits are placed on our constitutional rights routinely. My First Amendment right to freedom of expression is tempered when the safety of the larger public is affected. I cannot incite a crowd to violence. I cannot expose state secrets. I cannot shout “fire” in a crowded movie theater.

The safety of the general public is a compelling reason to place some restrictions on our constitutional freedoms and I think this can be done in a way to balances those competing interests without unduly infringing gun owners’ rights.

Of the proposed Congressional actions, there are three I would like to see enacted: 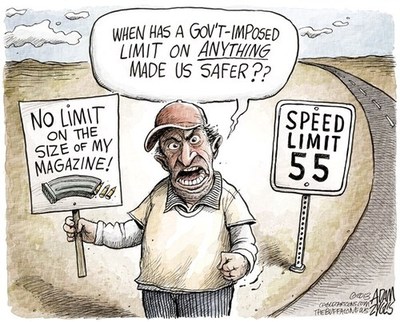 The Effectiveness of Legislation

Some members of the gun-rights lobby make the claim that criminals do not follow laws, therefore any gun safety legislation we pass will harm only law-abiding citizens. This seems to imply that we should not bother setting any laws about anything, because criminals will break those laws.

The setting of speed limits and the passing of laws requiring seatbelt use do not ensure that nobody speeds and everybody wears a seatbelt. These laws have resulted in a reduction of deaths and injuries and provide a basis with which to prosecute those who break the law.

Universal background checks would work in much the same way. They will not prevent all gun violence – the Newtown shooting, for example, might still have happened. Currently, it is estimated that between thirty and forty percent of gun sales happen with no background check. (These would be private sales, gun show sales, etc.) Universal background checks will place an additional barrier in the way of people with criminal records or a history of mental instability, making it more difficult to get a weapon with which they can do great harm.

Conducting background checks on private gun sales and increasing criminal penalties for “straw purchasers” could help stem the flow of guns into the criminal underworld by closing potential loopholes. Many people purchase guns for personal protection. Making it more difficult for people who should not have guns, to obtain them, should help increase everyone’s safety.

Having a right to bear arms does not inherently give you the right to privacy when you purchase a weapon. Universal background checks would go a long way to ensuring that the people who purchase guns are law-abiding. 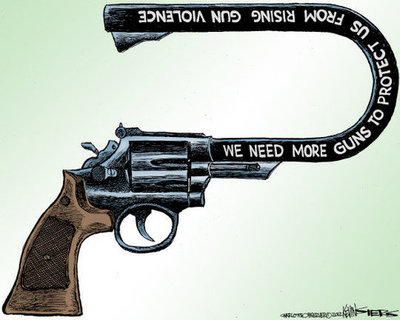 The Need for More Information

On the issue of funding research, there is much we do not know about the causes and effects of gun violence. Congress (at the urging of the National Rifle Association) has routinely cut funding to the Centers for Disease Control and the National Institutes of Health when the results of studies they undertook demonstrated a need for gun legislation.

In fact, despite more than four million gun-related deaths and injuries in the United States over the last four decades, the NIH has awarded only three research grants on the subject. Compare that to diphtheria, which has caused only 1,337 deaths in those four decades but for which there has been more than 50 NIH-funded studies. Even influenza, which regularly kills fewer people each year than gun violence, receives much more research funding.

Effective legislation can increase public safety and it needs to be based on empirical evidence. Some things we should better understand, as outlined in a recent Atlantic Cities blog post, include whether magazine limits actually work, who should be excluded from owning a gun, and whether there is a relationship between levels of gun ownership and levels of crime.

What We Should Not Do

Among the proposed legislative actions that I do not think we need to take are reinstating the assault weapons ban. While I do not see a need for anyone to own an assault weapon, that’s the purview of an individual gun owner or collector. So long as he or she is law-abiding and undergoes a background check, it does not matter to me what kind of gun is purchased.

Without a doubt, this debate will continue. It is fueled by loud voices and, especially in the case of the National Rifle Association, a lot of money. However, I think it behooves each of us to try to move beyond the hyperbole, gather facts, consider our own values, and then add our voice to the discussion – especially by letting our legislators know what we think.

Well, that is my opinion on the matter. I welcome your comments and remind you that only constructive comments will be entertained. The First Amendment does not prevent me from squelching name-calling and uncivil discourse!