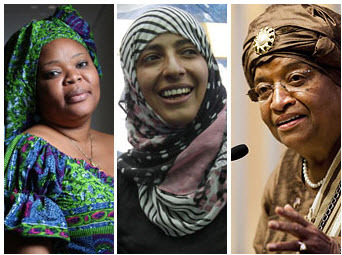 While I’m wary of broad generalizations, today’s announcement of the 2011 Nobel Peace Prize winners, a trio of women who have promoted the causes of peace, freedom, and opportunity through nonviolence, led me to a conclusion: if we really want to change the world, we need to put more women in charge.

Leymah Gbowee (on the left) is a social worker and trauma counselor who organized a group known as the Women of Liberian Mass Action for Peace, a non-violent group protesting for peace that was instrumental in bringing an end to Liberia’s civil war.

Tawakul Karman (center) is one of Yemen’s most vocal and well-known activists.  She is also a member of the country’s main opposition party.  Using social media, she organized the first student demonstrations challenging the rule of President Ali Abdullah Saleh.

Ellen Johnson Sirleaf (right), a Harvard-trained economist, was elected in 2005 as President of Liberia.  She was the first female democratically elected president of an African nation.  She has promoted development after 14 years of civil war that devastated the country, leaving some 200,000 dead.

When women lead, they tend to lead people towards health, education, and peace.  Looking at the track record of men, which often leads towards war, abuse of power, and exploitation, it seems that all other factors being equal, a female leader would be preferable to a male one.

0 thoughts on “Want to Change the World? Choose a Woman.”