People relate to data in different ways.  I’m very much a visual learner and putting data in charts, graphs, or other sorts of illustrations help me understand, absorb, and put the information into context.  I’ve also found it useful to track data that is important to me.  Many people use tools like this – think of exercise logs to keep track of your progress towards fitness goals.  Several companies now provide software solutions that make it easier for people to tabulate whatever it is they want to tabulate, then turn it into graphs and charts.

Recently, I tried out an application from TouchGraph, a New York-based company that specializes in visualization tools and they created this Facebook application as an experiment to demonstrate the capabilities of their technology.  Other companies that provide other visual relationship applications include LinkedIn and Daytum.com.  After entering your username and password – TouchGraph accesses your information only with your permission – they application generates a variety of charts to map the relationships of your Facebook friends.

Here are thumbnails of increasing numbers of my Facebook friends, from my 100 “top friends” on the left (no explanation on what constitutes a “top friend” in TouchGraph’s scheme of things) to all of my more than 600 Facebook friends on the right.  I’m fascinated to watch how the groupings make small shifts as more people, and thus more relationships, are factored into the graphic. 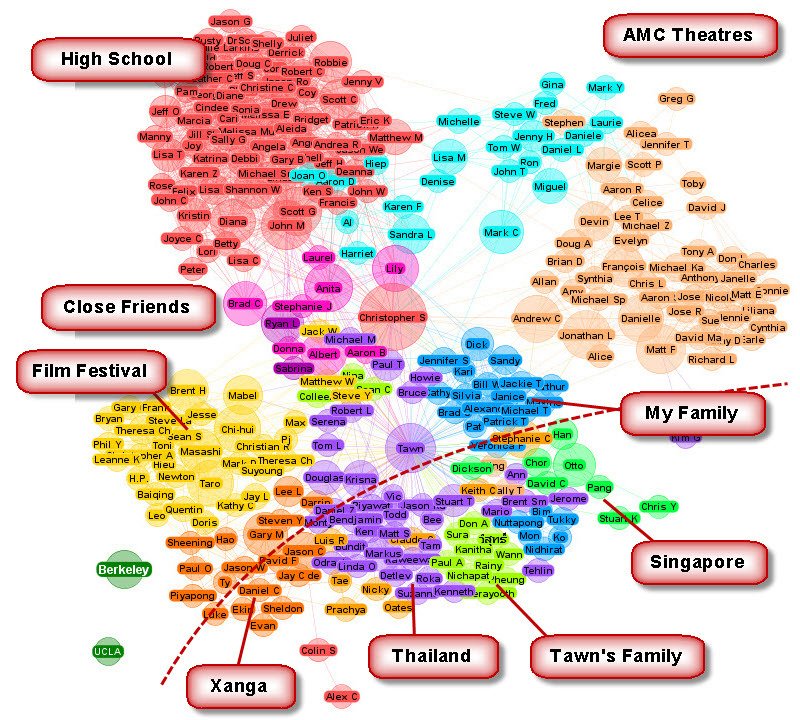 I also found it interesting just to observe how these relationships are mapped out.  Using the 300 friends setting, I found nine primary identifiable groups from which my relationships arise.  AMC Theatres was my first real job after being a newspaper delivery boy and I continued working with the company through university and even for several years after.  Needless to say, a lot of my connections were made there.

One area that is missing is a significant number of friends from post-secondary school.  I changed schools twice en route to my degree, and only lived on campus for six months total, so my number of university friends is less than a dozen.

What’s also interesting to me is the California-centric nature of my contacts!  No surprise, I suppose, given that I grew up in the Bay Area and lived in Southern California several times.  But everyone to the left and above the dashed line is pretty much in California or else that’s where I originally knew them.

Anyhow, that’s more than you probably wanted to know about my life.  I found it interesting, though.