A brief break from writing about the Hawai’i trip.  There’s been lots of news about dogs in my life recently.  Here on Xanga, Val wrote a poem about her aging Australian Shepherd.  Tiara wrote an entry about five of her dogs being poisoned by thieves on Saturday night during an interrupted burglary.  And to top it off, Tawn’s father called him Friday morning to tell him that his Maltese, Benji, had died early that morning after three days of illness. 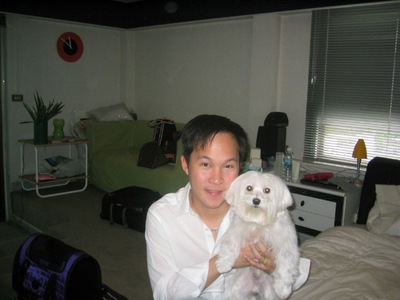 Pets can be a big part of the family and people become very attached to them, of that there is no doubt.  I’ve never had pets in my house, save a pet rat that my sister had for a year or two.  It is interesting because I get along very well with animals (and children, too!), but have never had a strong desire to have pets of my own.  Tawn has had lots of dogs for his entire life and even with Benji’s death there are still seven or eight dogs at his parents’ house.

I wonder if there will be a point in my life where I have a pet of my own.  It doesn’t seem that important to me, but maybe I’m missing out on the experience and once I had a pet, I would understand the connection that so many other people experience with their animal companions.

What about you?  Are you an animal person or, more precisely, do you have pets?