I have a love of stamps, especially air mail stamps.  There’s something romantic about envelopes bearing colorful and exotic stamps, and the receipt of a letter in a red- and blue-striped envelope with “par avion” marked on the outside holds all the promise of great adventure in foreign lands.

Many of you know that I write letters to my nieces for them to save and open when they turn 18.  Along the way, I send letters from different countries I journey to and ask at the post office here in Thailand for the latest and most interesting stamps, so that when they sit down with the letters as adults, they enjoy a journey even before opening them.

I must say, though, that I’ve grown tired of the Thai Post Office “air mail” stamp.  I’ve recently thought about having a rubber stamp or two custom made with my own air mail logo.  Browsing the internet, I collected bits of clip art and sat down last week to create some potential designs.  Lacking Photoshop or Adobe Illustrator, I instead used PowerPoint and SnagIt to create and manipulate these images.  Your thoughts and opinions are most welcome.

#1 – My initial design was very simple, perfect for a rubber stamp.  It features a plane that looks to be a Ford Tri-Motor and some simple text, with French, naturellement! 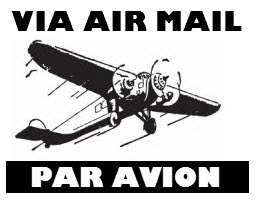 #2 – Advancing the design a bit, I decided to get more martial in my font choice.  This would certainly capture the attention of the employees at the postal service. 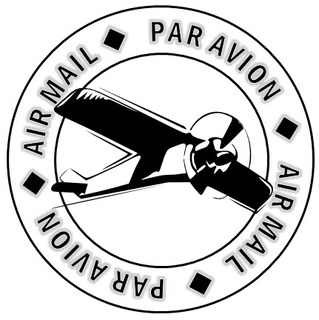 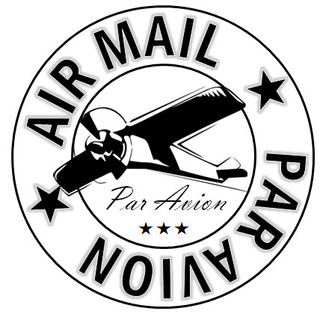 I continued my experimenting with a new airplane image, one with a transparent background that let me lay the image over text and other graphics.  Design #3 was my first attempt with the circular logo, playing around with PowerPoint’s word art feature until I figured out how to use it.  Design #4 introduced stars and saw the plane heading in the other direction, which gives it an altogether different feel. 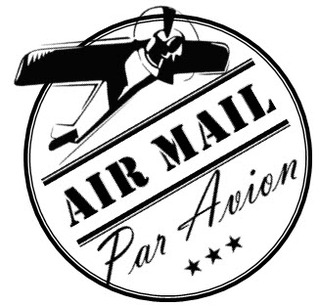 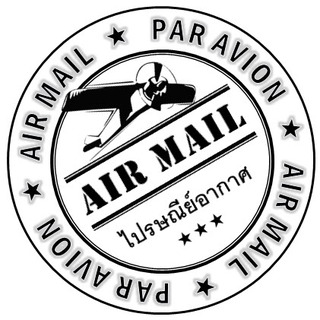 The next two designs made use of rotating everything 270 degrees, which is a little silly considering that with a rubber stamp, I could just hold the stamp at an angle.  No need to design everything at an angle, too!  Anyhow, design #5 simplified the circular border and had the airplane’s wing and propeller breaking the border, which is a dynamic effect.  In design #6 I returned the second circle and also introduced the Thai phrase for “air mail”.

Feeling that I had neglected modern aviation, design #7 introduced the silhouette of a Boeing 737 Next Generation and a simple text box.  I played around with it to have the airplane’s tail and landing gear break the border of the text box, giving it a little bit of dimension.

I started to wonder whether, instead of making a rubber stamp, I should just have the air mail logo printed as an adhesive stamp, an inexpensive prospect.  So I created a series of designs to explore that idea.  #8 has a nice “out of the box” effect.  #9 is similar but introducing color and moving the Thai to align with the English and French.  #10 played with the idea of inverting the colors, which is interesting.

Next, I decided to revisit the classic air mail envelope, but couldn’t decide how to end the stripes.  #11 complements the angle of the italic letters while #12 has the 90-degree angle of a classic letter envelope.

My final two designs were a little more art deco.  #13 is an original and took some time to figure out how to make the airplane image come together correctly.  #14 is an homage to a classic stamp I saw online, with a few small changes.

So what do you think?  Which one(s) do you like and do you think I should go rubber stamp or self-adhesive?