In December, Tawn’s university friend Ko was married.  Tawn and several of their close friends helped with various aspects of the wedding.  For example, Tawn served as the emcee both in Thai and English, since the groom’s family are from Sweden.  As a thank-you, Ko’s mother took the friends (and me) out for a very nice dinner at the Grand Shangarila Restaurant, an old-school Chinese restaurant in the Silom area known for their seafood hot pot and lobster sashimi. 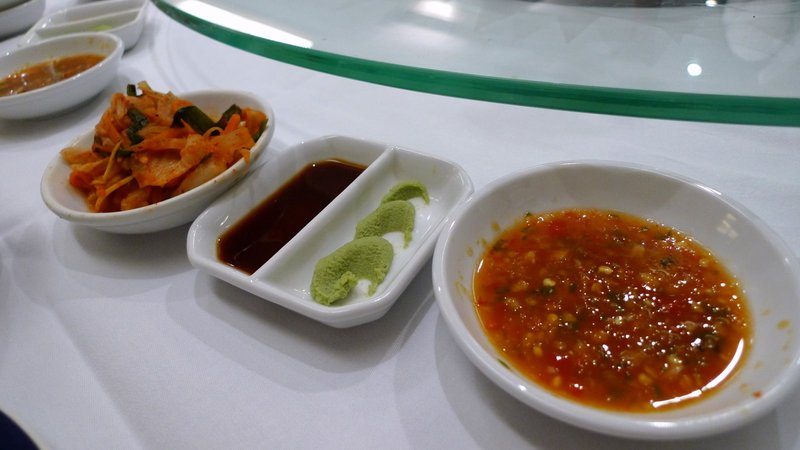 A choice of sauces and condiments: kimchee, soy sauce, wasabi, and Thai style dipping sauce.  Korean, Japanese, and Thai all in one row. 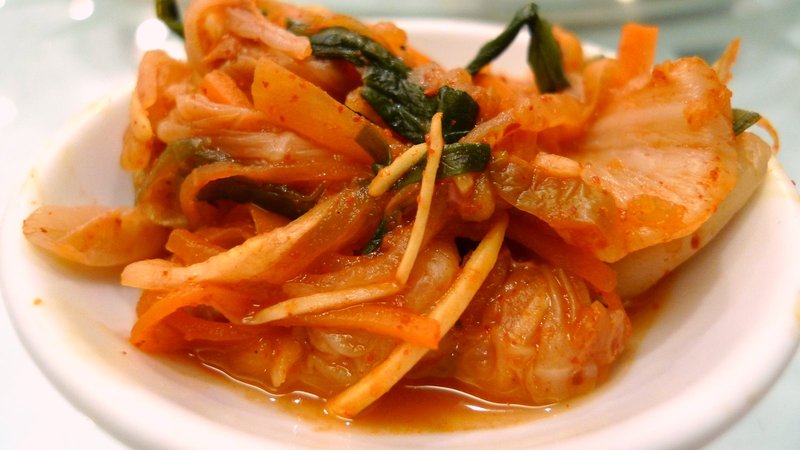 Look at the beautiful kimchee! 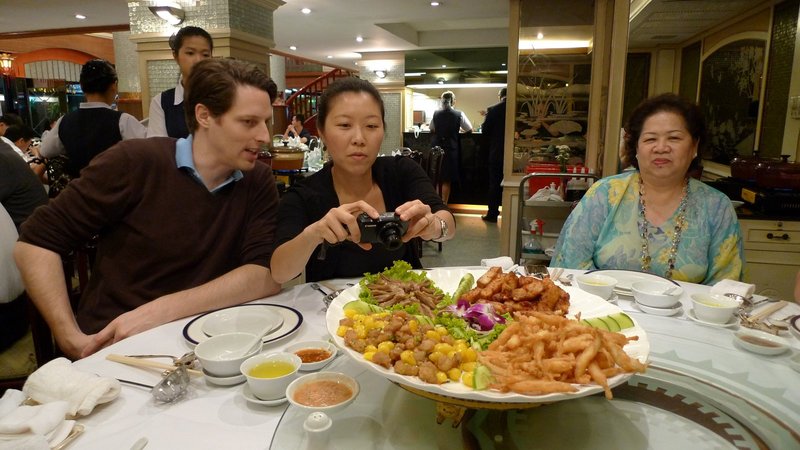 Newlyweds Per and Ko take pictures of the appetizer plate, while Ko’s mother looks on. 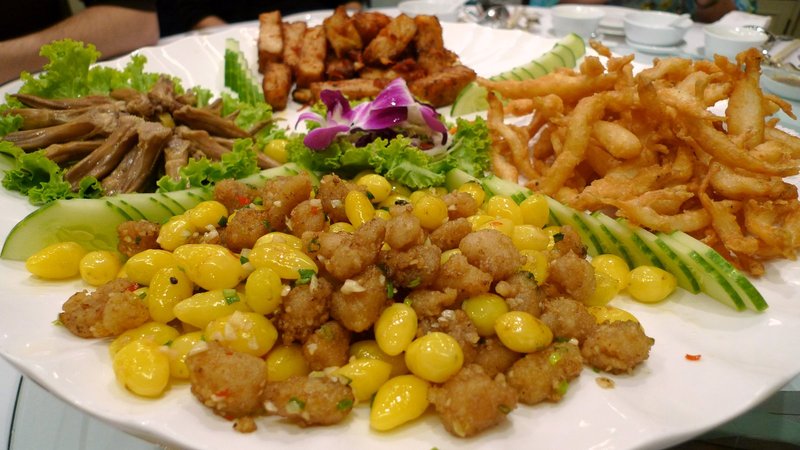 Can you name all the appetizers?  From the back, clockwise: fried daikon radish cake; fried small fish; fried deer tendon with ginkgo nuts, and – anyone want to guess what item four is?  Please see below… 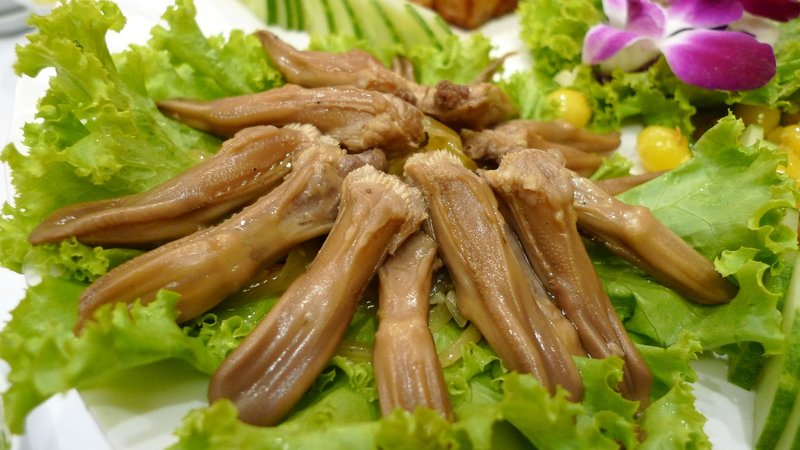 If you guessed duck tongue, you would be correct.  There’s a little cartilage spine in them after you eat the meat.  Who knew?  Tasty, though. 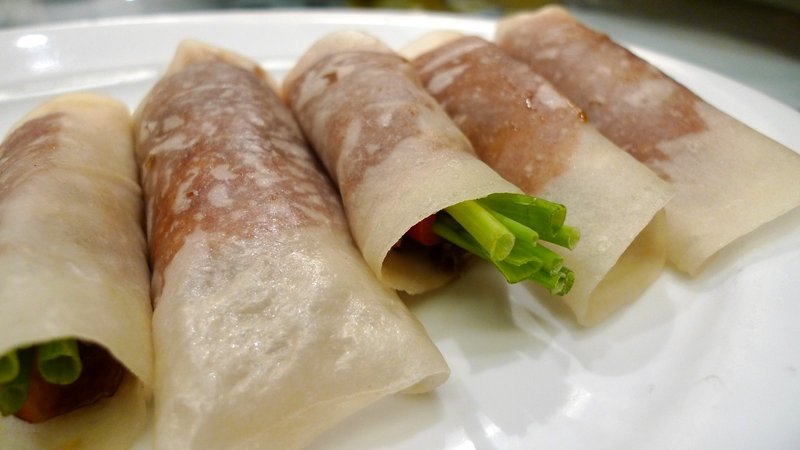 A lovely roast duck was brought to the table and presented to us, then the staff carved the crispy sweet skin off and wrapped the skin in these delicate crepes with plum sauce and green onion inside. 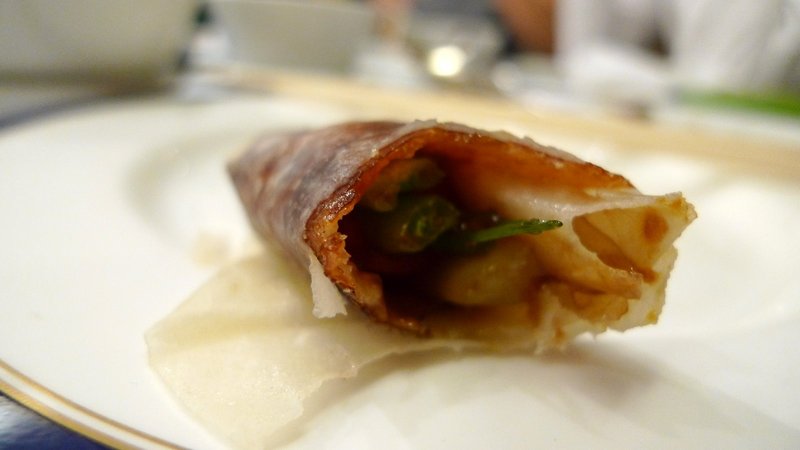 Close-up view of the crispy goodness of roasted duck skin. 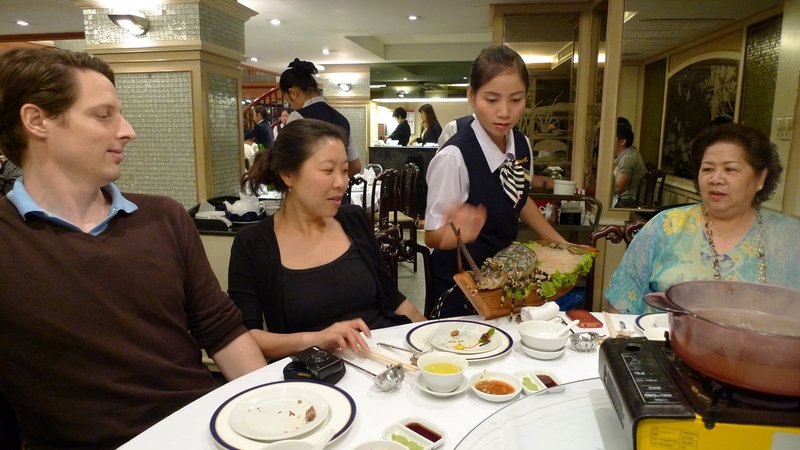 The main course: lobster sashimi.  Look at the size of it!  Everyone is in awe… 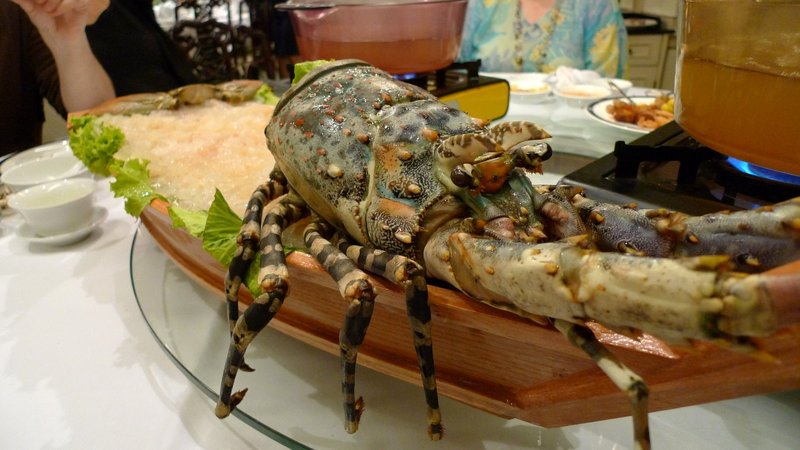 Creature from the black lagoon… 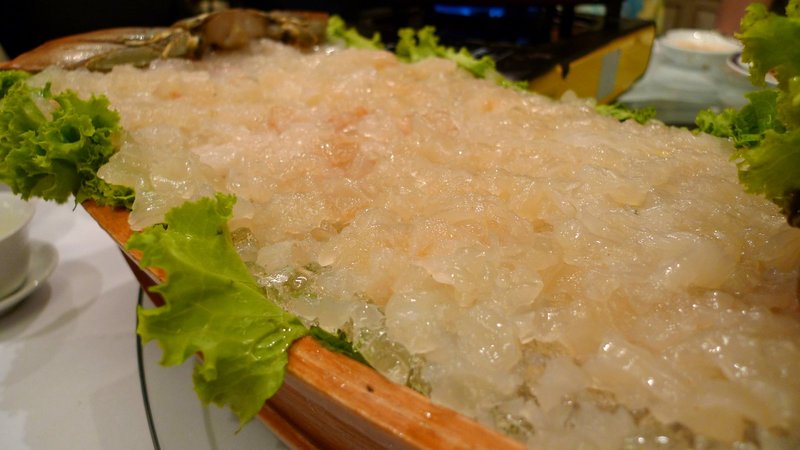 The sweet meat, which we could either boil briefly in a broth and eat, or simply eat raw after a brush of soy sauce.  In my opinion, raw was the better option as it was tastier. 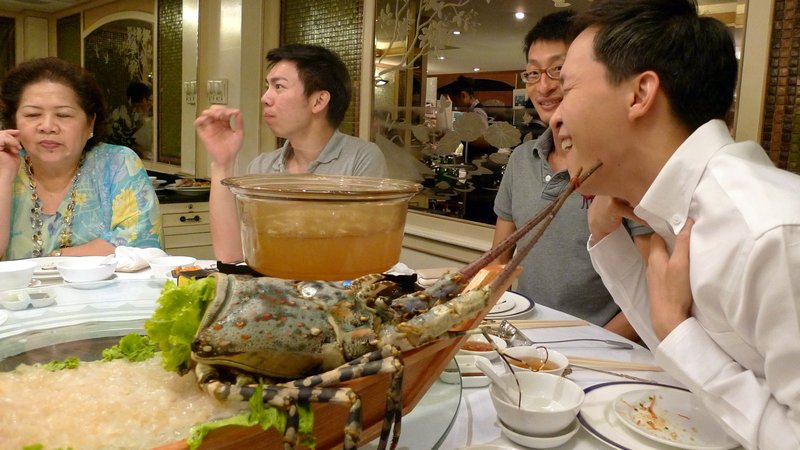 My goofy husband pretending to be impaled on the lobster. 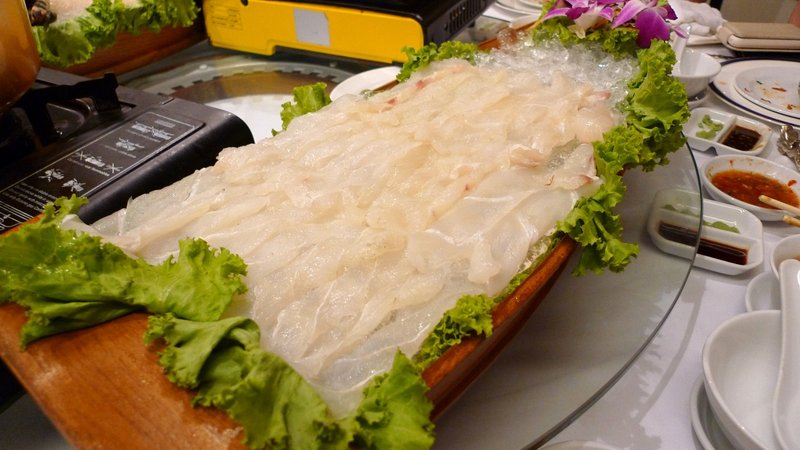 Also served was a boat of sashimi dragon fish, a firm white fish that was boiled in another broth. 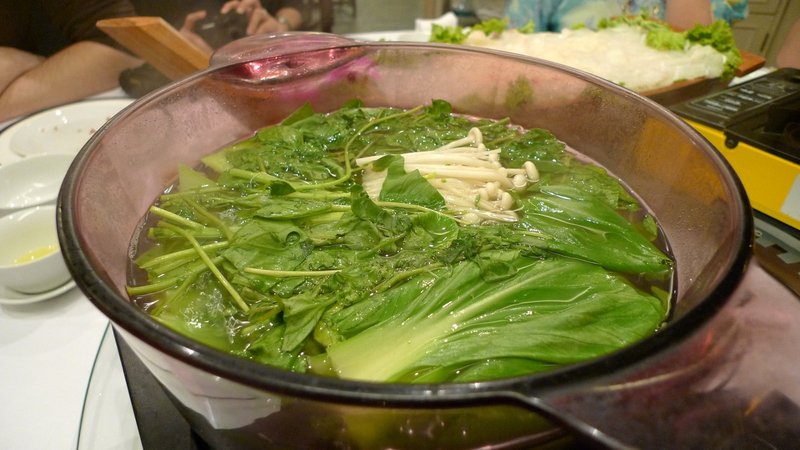 There were two broths, one made from some of the lobster’s blood and Chinese cooking wine and another from the fish bones.  Don’t mix! 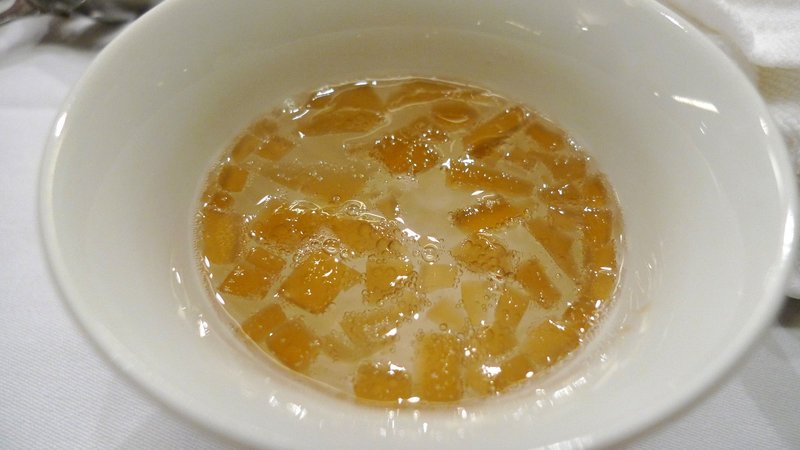 Also served with the lobster was a little bowl of – any guesses?  A gelatin made from the lobster’s blood, with Sprite poured over it.  Odd… didn’t understand the point of this.  It is meant to be a chased to the lobster and the gelatin was pleasantly salty.  But no idea why the Sprite was in it. 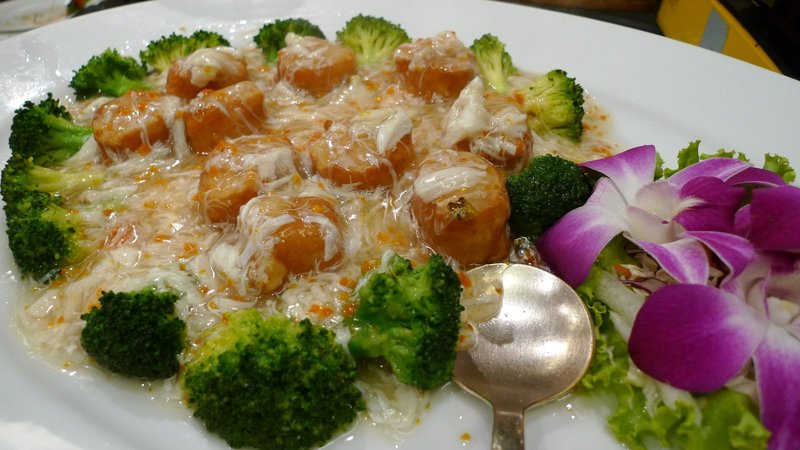 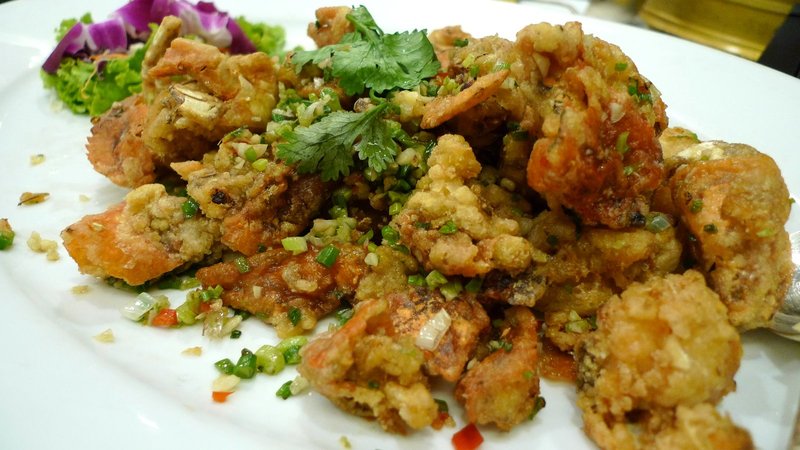 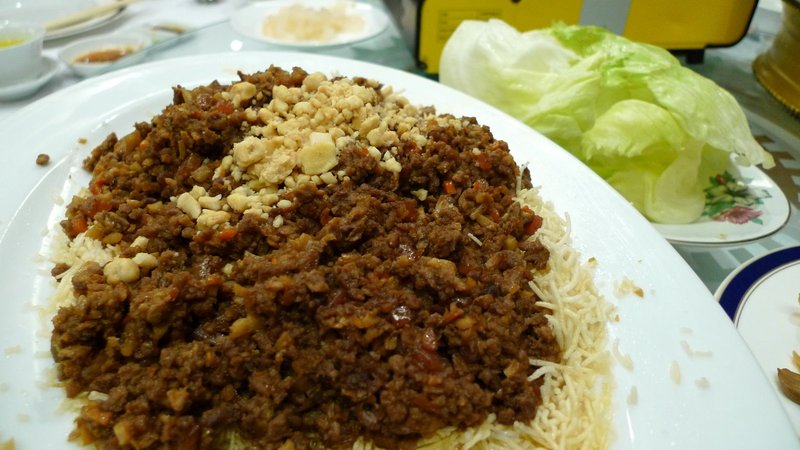 The remaining roast duck meat made its way back to the table as a stir fry served on a bed of crunchy fried vermicelli noodles. 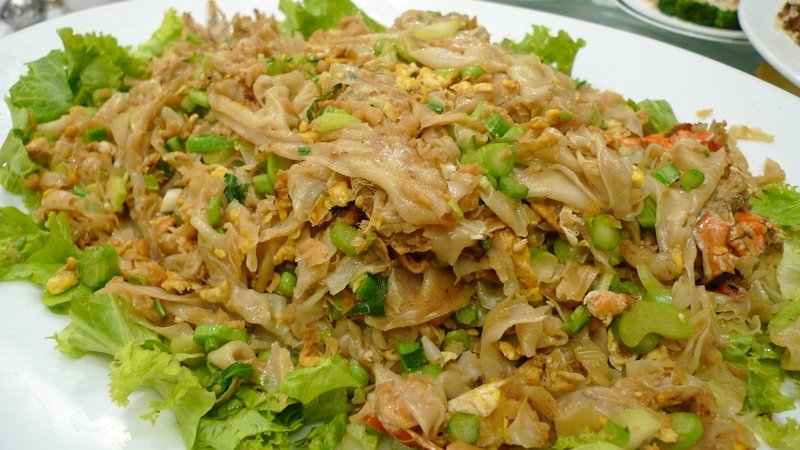 Fried wide rice noodles with lobster head.  Ultimately, the entire lobster that was first served as sashimi is consumed over several courses. 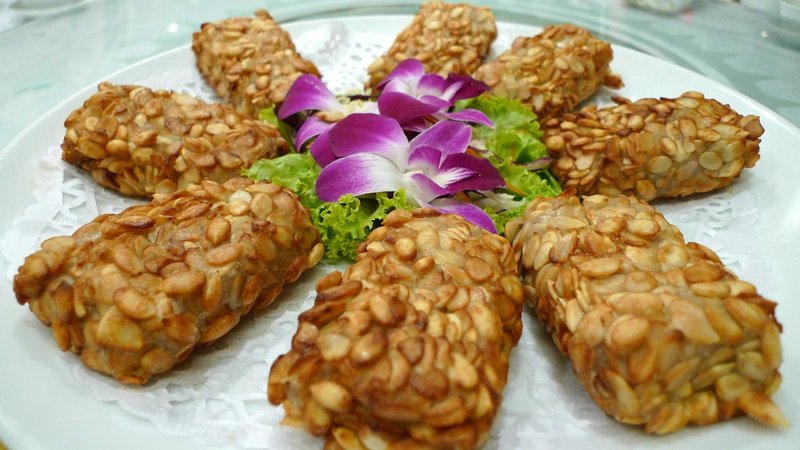 Dessert number one was a taro paste bar with ginkgo nuts wrapped in pumpkin seeds and fried. 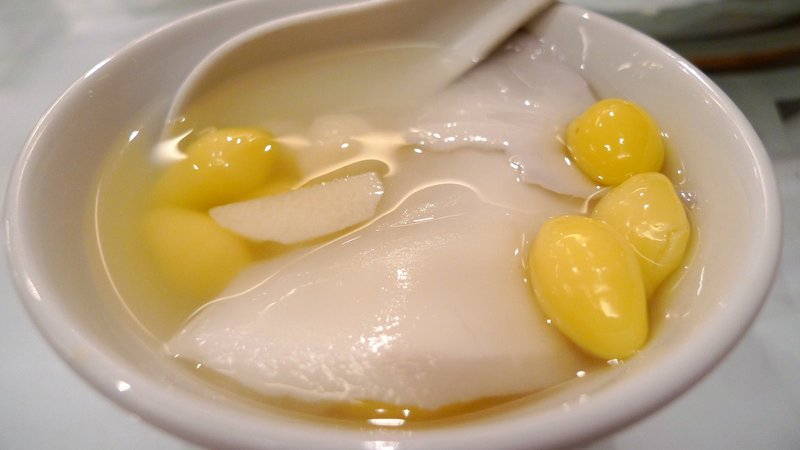 Needless to say, this was a pretty fancy – and filling! – meal.  We were really treated wonderfully by Ko’s mother and went home with several containers of leftovers per person. Outside the front of the restaurant, which is located just off Soi Taniya, the adult nightlife street that caters to Japanese tourists and expats.