Five years ago, when I moved to Thailand, Tawn’s father established a “don’t ask, don’t tell” policy with regards to me.  He acknowledges that I exist as a part of Tawn’s life, but he doesn’t want to know anything more about me and he doesn’t want me involved with his life.  I’ve made my peace with that.

The story of hope is that while Tawn’s father isn’t warm and cuddly towards me, plenty of other members of his family have been.  Over the eleven years we have been together, Tawn has introduced me to many of his relatives and I’m friends with what seems like half his cousins on Facebook.  Of all these relatives, one family in particular – an aunt and uncle in Los Angeles and their three sons – have been particularly welcoming, ever since Tawn first brought me to dinner with them some eight or nine years ago.

I keep up with those cousins, their wives, and children (who are about the same age as my eldest niece) as regularly as I do the cousins on my side of the family.  Especially with regards to the joys and challenges of parenting, I follow along, offer my support and encouragement, and laugh at the pearls of unvarnished truth that tumble out of their children’s mouths.

And that is where this is a story of innocence lost.  One of these “first cousins once removed” is eight-year-old Jessica.  She’s just a little too sharp for her own good and is ceasing to believe in the things that make childhood such a magical time.

On Sunday, Jessica lost a tooth.  As her father tells it, before she went to bed she started questioning the existence of the Tooth Fairy.  Last November when she lost a few teeth, she wrote a note to the Tooth Fairy asking for a photo of her.  Thankfully, her father explains, the Tooth Fairy produced the evidence in a future visit. 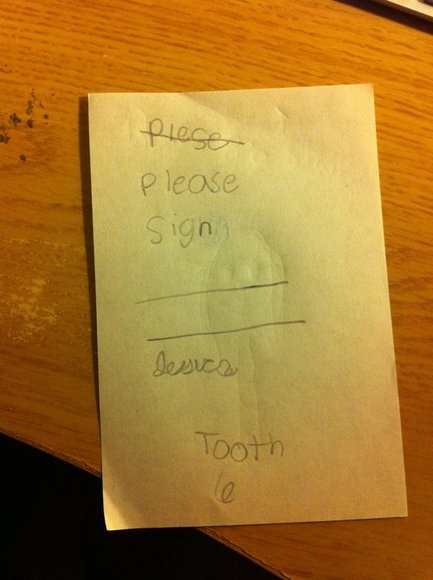 When Jessica’s father went to look under her pillow Sunday night, he found this note asking the Tooth Fairy to sign her name in receipt of the tooth.

So while I get the joy of being a part of Tawn’s extended family, it seems that at least one of them is growing a bit cynical with age.  And it isn’t Tawn’s father I’m talking about.