Hong Kong is one of those cities that, when I visit it, I feel more like an insider than an outsider.  That may be a bit presumptuous of me, but then who is to judge another person’s feelings about these matters?  I lived in Hong Kong for just over three months in 1998-99 and I made it a point to get out and explore with every free moment I had.  Since then, I’ve been back to Hong Kong a dozen times visiting friends and retracing my old stomping grounds.

On this visit, though, I had an opportunity to spend a day seeing the city once again through the eyes of a first-time visitor.  Another American expat who lives in Bangkok timed his first visit to Hong Kong to coincide with mine, and I offered to play tour guide on Friday. 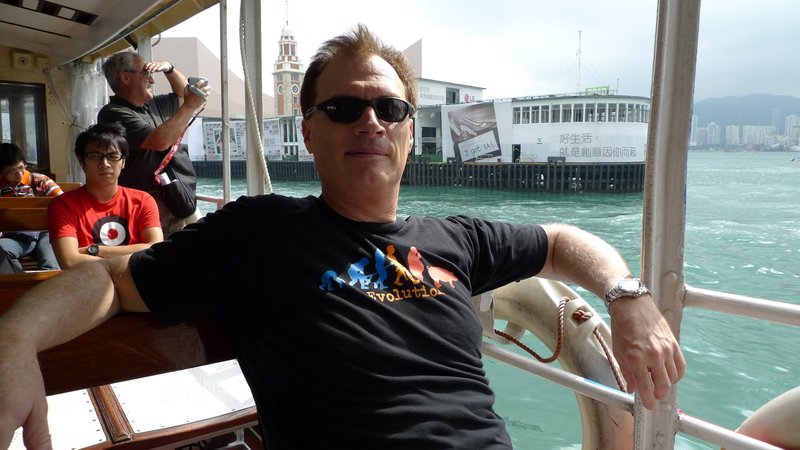 This is Vic.  If you think he’s cute and would like to date him, let me know!  (Ha ha…)  We started our day at his hotel in Tsim Sha Tsui and walked along the harbour front to the Star Ferry terminal, taking the ferry across to Central.  Of all the things you can do and see in Hong Kong, I think the Star Ferry is the best value.  Eight minutes for less than US$1.00 to cross one of the most scenic harbours in the world.

From Central we took our time walking along the elevated pedestrian paths, taking in the significant infrastructure development going on near the waterfront.  In a few years, the entire waterfront from Central to Causeway Bay will be open to pedestrians, a wonderful improvement.  We then continued to the Mid-Levels for a late breakfast at Tsui Wah on Wellington Street.

Afterwards, we walked back downhill and caught a ride on one of the island trams.  These trams are over 100 years old and in addition to providing transportation for nearly one-quarter of a million passengers each day, they are an inexpensive and very effective way to take in life in Hong Kong as you slowly make your way down major thoroughfares and into various neighborhoods.  Some of the sights that caught my eye: 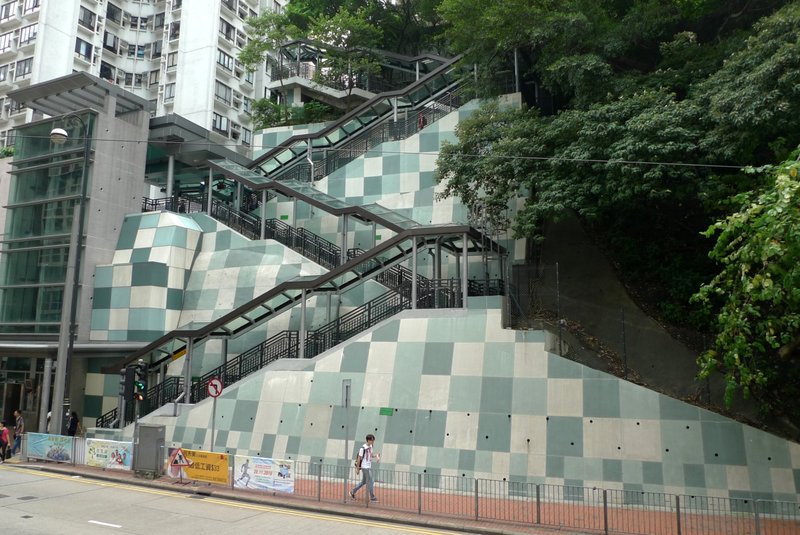 A serpentine staircase works its way up a steep hillside with the retaining wall painted an interesting checkerboard pattern. 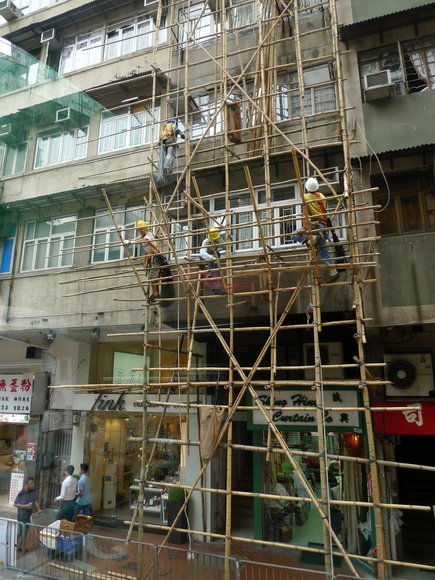 Bamboo scaffolding, which is much stronger and more flexible than metal scaffolding, perfect for a city that is often buffeted by typhoons.  In fact, one blew ashore a week after I departed.  Despite knowing that the bamboo is much sturdier, I have a hard time reconciling that fact with the flimsy appearance of the structure. 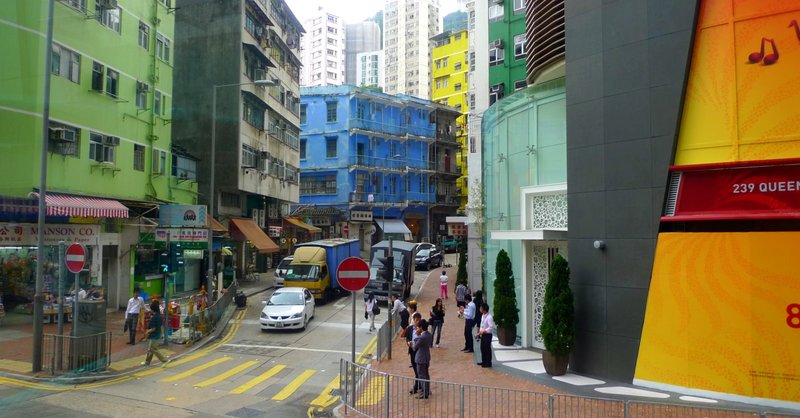 A colorful side street.  Most buildings in Hong Kong are very drab, painted once in their lifetime and rarely repainted.  This small street, though, had a lot of color going on. 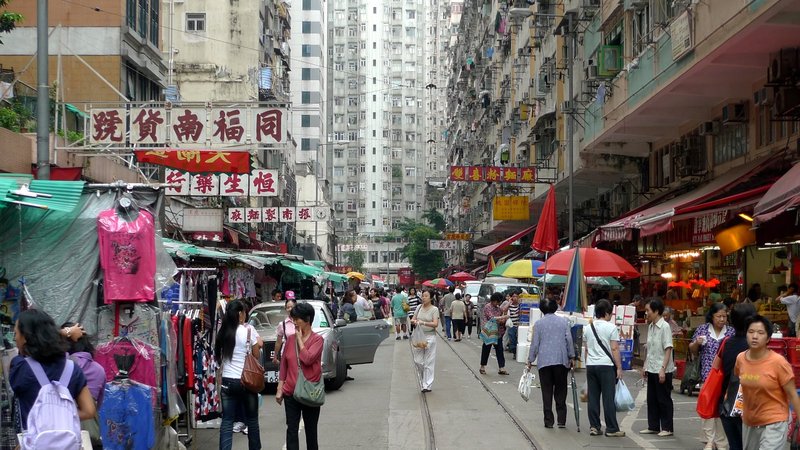 Our destination was North Point, a neighborhood in the Eastern District of Hong Kong Island.  Primarily a residential and retail area, the island tram terminates in the midst of a crowded market street.  We walked around for a bit, taking in the sights and heading to the waterfront to see the view. 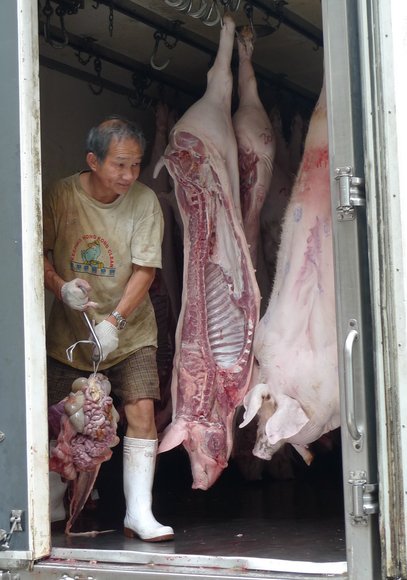 Among the interesting sights was a truck full of slaughtered pigs.  While I was standing there, this bundle of guts fell to the floor of the truck.  The man kicked them towards the door before picking them up and resecuing them. 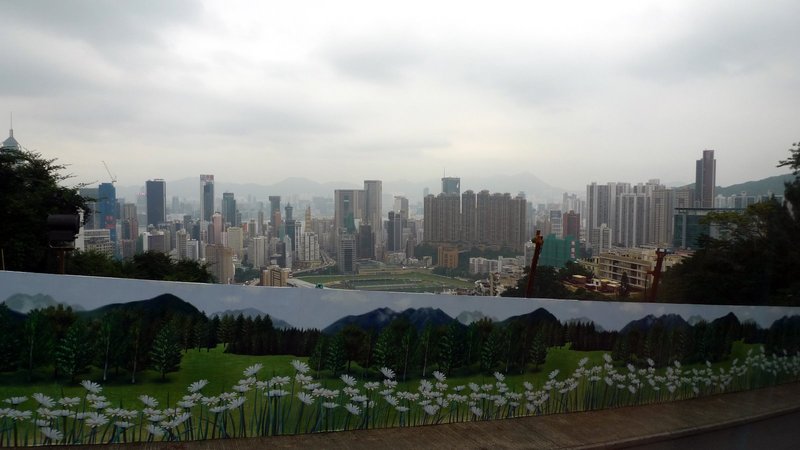 After lunch at Pacific Place mall in Admiralty, we caught the #15 bus to Victoria Peak.  Sure, you can take the Peak Tram to the summit but it is pricey and touristy.  Better to take the inexpensive bus which spends an hour winding its way up the mountains, giving you fantastic views of Happy Valley and other parts of the city.  I was tickled by this construction fence that was built to hide some work being done alongside the road.  Located directly across the street from an international school, the fence has a vista painted on it that is incongruous with the view that lays beyond it.  Just above the fence you can see the end of the Happy Valley Racecourse. 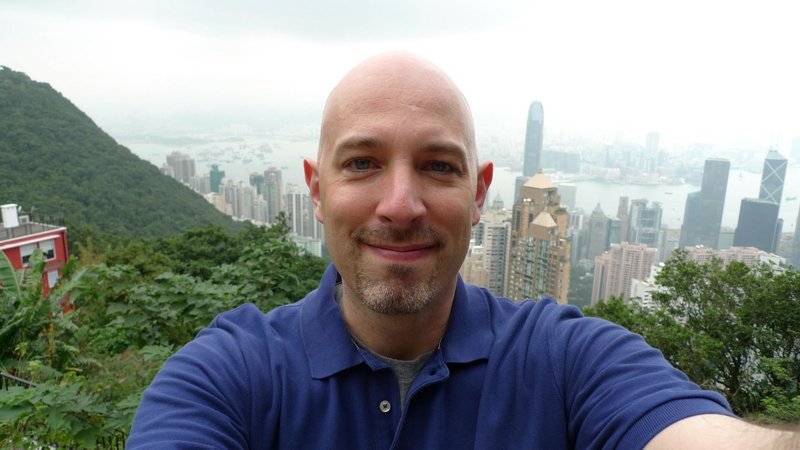 Atop the Peak we walked a short way away from the masses of tourists and schoolchildren and took some pictures.  It was a hazy day (which are never in short supply here) but managed to get a few good pictures. 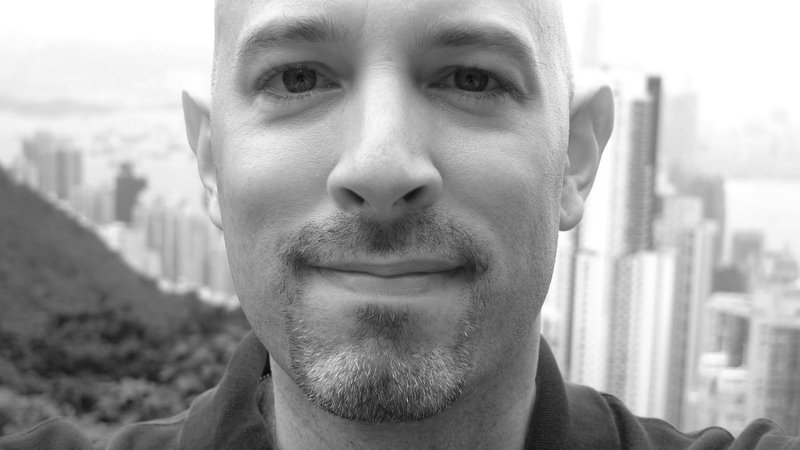 I’m tempted to use this one to replace my current profile photo.  Thoughts? 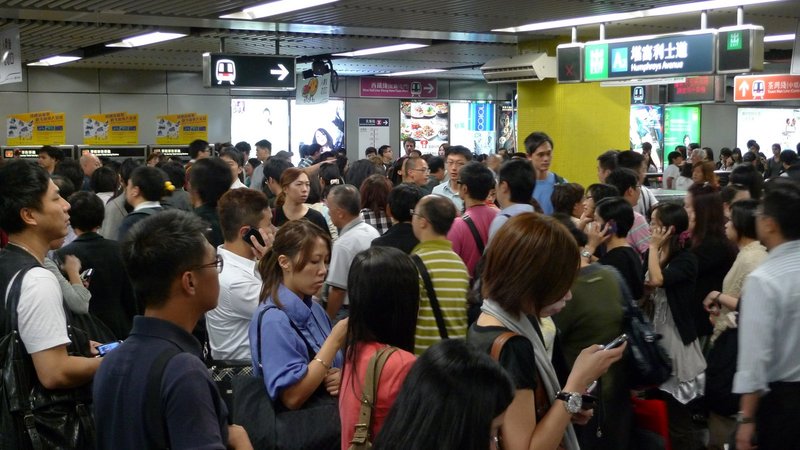 After the Peak, I turned Vic loose on the city as I had an appointment with an old friend for dinner in Mongkok.  Above, the chaos that is Tsim Sha Tsui MTR station at about 7pm on a Friday night.  Madness, I tell you!  I shot some video and may get it edited together to share with you. 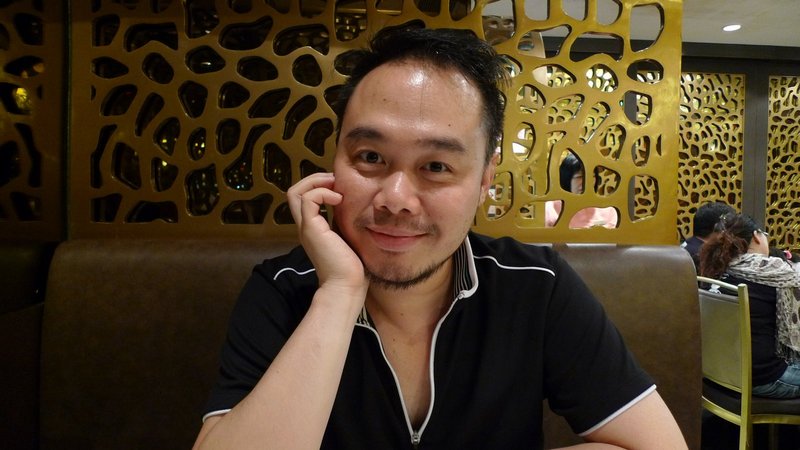 After walking for a little bit, Edward decided on a Cantonese restaurant just off Nathan Road.  I didn’t get the name and while the food was good, it wasn’t so good as to recommend you to visit it.  Above, Edward, whom I met when I lived here in Hong Kong. 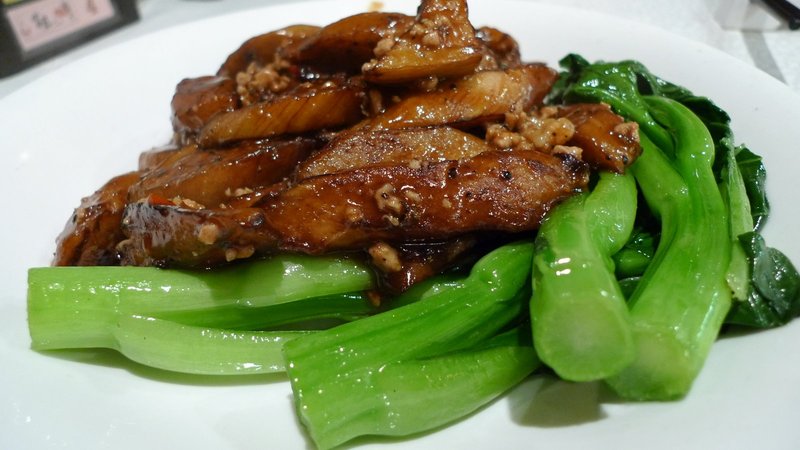 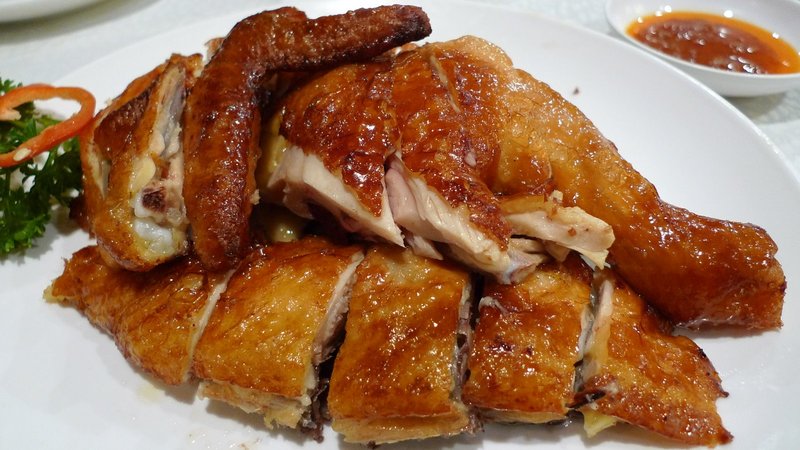 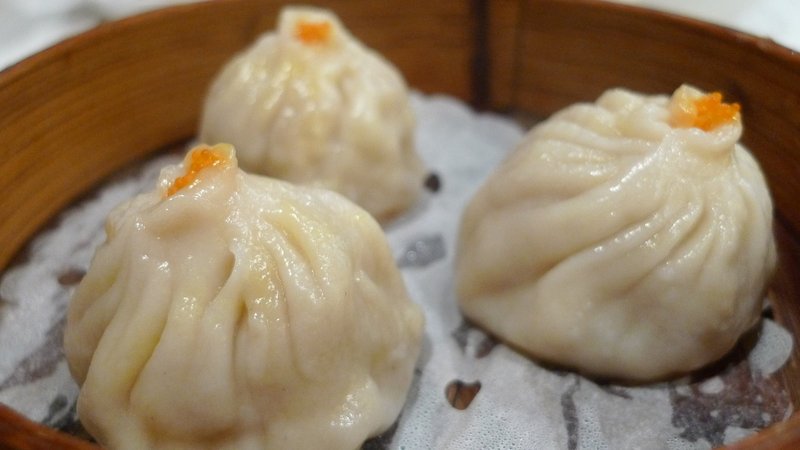 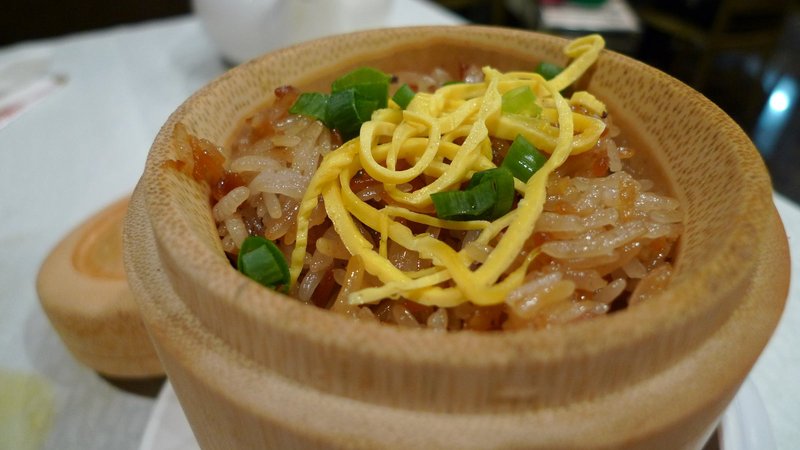 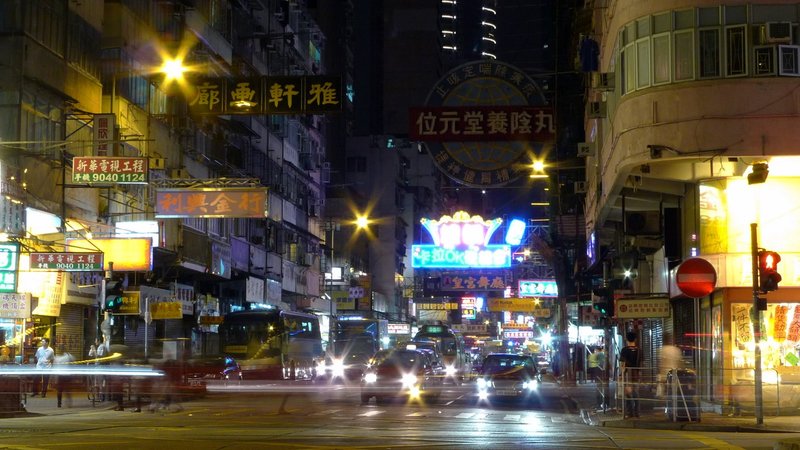 The meal was fine but the company was definitely better than the food.  Afterwards, we strolled around the neighborhood, remarking how much this part of Kowloon has changed in the past decade.  When I lived here, this area had a lot of red light activity and was always featured in police and gangster movies.  Nowadays, thanks to the clean-up effort brought about by the Langham Place Mall, it is much nicer and the illicit activity has moved a block or two to the west.

We wandered through the wholesale fruit market and over to Olympic MTR Station, another area that is radically different than a decade ago when it was the initial stages of landfill.  This is a city that is always changing.

0 thoughts on “Seeing Hong Kong Through a Tourist’s Eyes”