This weekend, Tawn turned 35 years old.  Hard to believe that this is the eleventh of his birthdays I’ve celebrated.  Because it fell on Friday, we had a couple of days to celebrate this (what he considered to be a milestone) event. 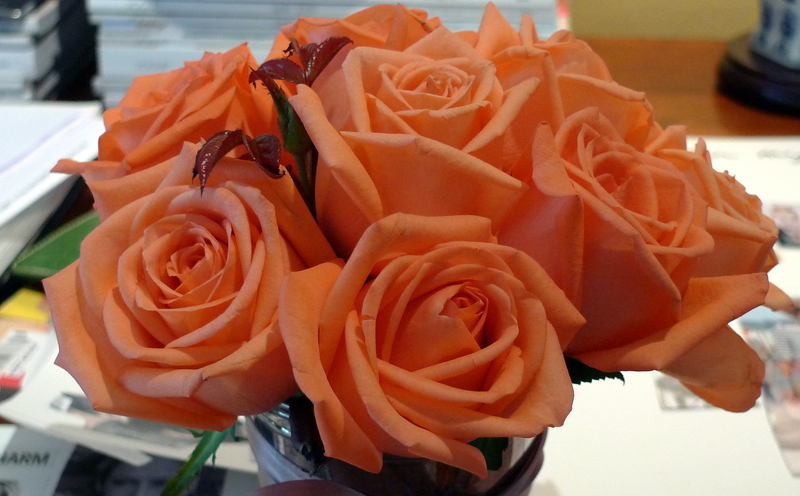 Tawn and I first met in January 2000 while I was en route to Thailand on holiday.  We stayed in touch over that year, with him visiting me in San Francisco several times.  In September 2000, I returned for another visit, to help him celebrate the quarter-century mark in his life.  The evening of his birthday, we gathered with his friends in a riverside restaurant somewhere on the outskirts of the city. 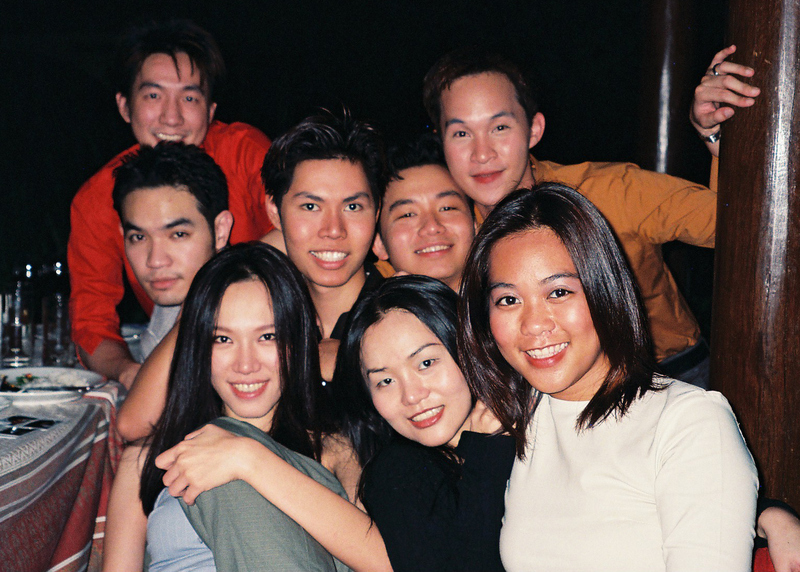 A shot from Tawn’s 25th birthday.

At the time, I remember it being a loud, difficult to follow gathering as his friends were gossiping in Thai and having a good time.  While most of them had studied overseas and all of them spoke English, I was for the most part on my own.  Having just met most of his friends, I was struggling to keep up with who was who, what they did, where they knew Tawn from, etc.

Now, a decade later, most of these same people are still in Tawn’s life and most of them were able to come over Thursday night for dinner. 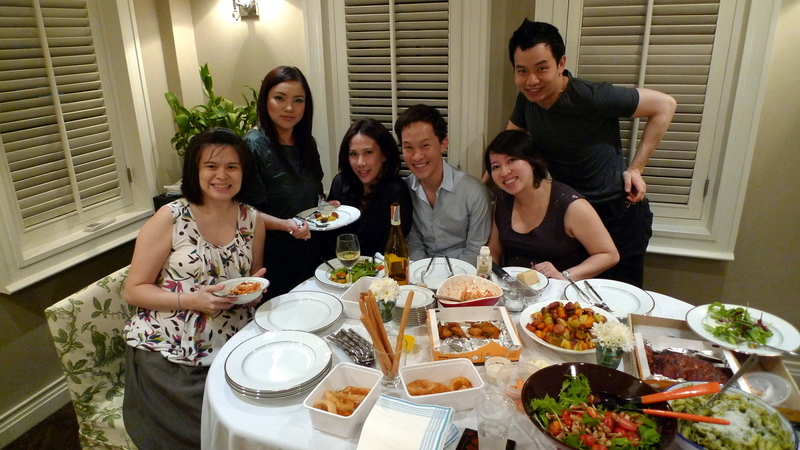 Four of the people from the previous shot are in this picture.  Can you tell which ones?

The friends and their husbands and children filled the house with laughter and energy.  The two children (we were missing two who stayed home), ages 2 1/2 and 3, were exploring a house that is largely “do not touch!” and there are two more children who will be born before year’s end.  Nowadays, I know who everyone is, what they do, and how they know Tawn.  It is still hard to follow the conversations, though, since the gossip is filled with inside stories, slang, and multiple layers of simultaneous conversation. 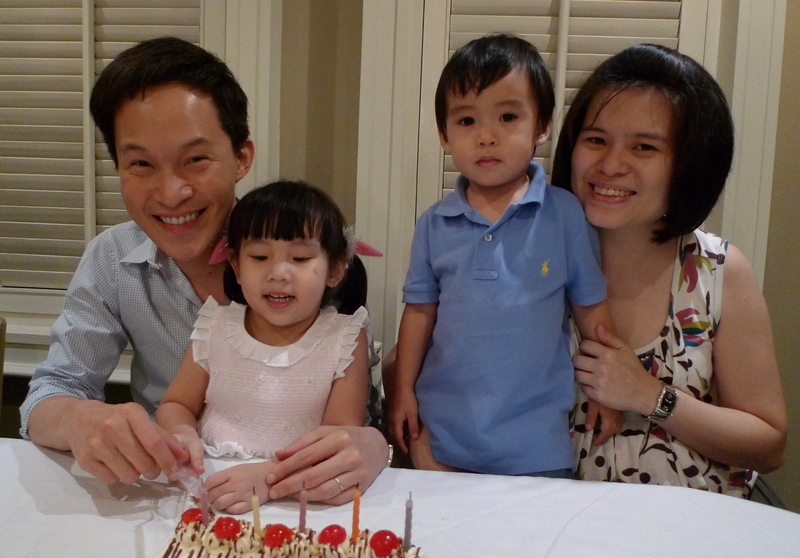 When it came time to blow out the candles, Uncle Tawn was helped by two of our friends’ children, 3-year old Nam Ing and 2-1/2 year old JJ.  Nam Ing is the spitting image of her mother, who is standing in the group shot above.  JJ is tremendously shy, although he goes to an international preschool and has a surprisingly extensive English vocabulary when he works up the nerve to use it.

After the party, Tawn described how much he enjoys having these friends together as they are like family to him.  I keep hoping we’ll see more of them and their children, having these images of weekly get-togethers where the children learn English from their Uncle Chris as we play games and draw and learn “The Itsy-Bitsy Spider” and other songs.  We’ll see how that develops in the years to come. 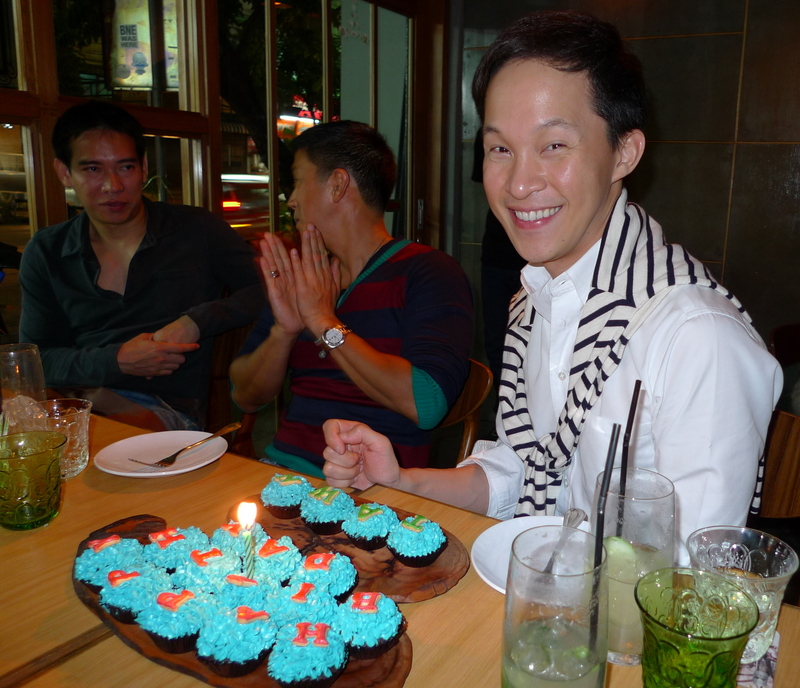 Friday evening we went with another group of friends to Soul Food Mahanakorn, a new restaurant that opened in our neighborhood just over a week ago.  I’m very excited to write about this restaurant but need to go back on an occasion when I can really focus on photographing the food.  Another of Tawn’s friends stopped by during the day with some homemade baked goods, including these peppermint frosted cupcakes that spelled out “Happy Birthday Tawn”.  The restaurant staff arranged them on some serving boards for us.

Saturday morning we received a call from my parents, who wished Tawn and happy birthday and chatted with him for twenty minutes or so.  I think Tawn, who enjoys the attention of others, felt a little overwhelmed about all the attention he received this weekend.  Of  course, next year should really be the year to celebrate as according to the Chinese culture (Tawn’s father’s side of the family is of Chinese heritage), birthdays that mark the completion of the 12-year zodiac cycles are the real milestones.  I guess there’s a few months left to plan that.