This is going to be the final word on dates for the time being.  I invited two couples, Doug and Bee and Ken and Chai, over for Sunday brunch.  Since I had been on such a roll this week with date-themed recipes, it became something like an Iron Chef challenge.  This meal’s challenge ingredient: dates.  In all humility, it turned out pretty darn good.  Let me share the menu with you. 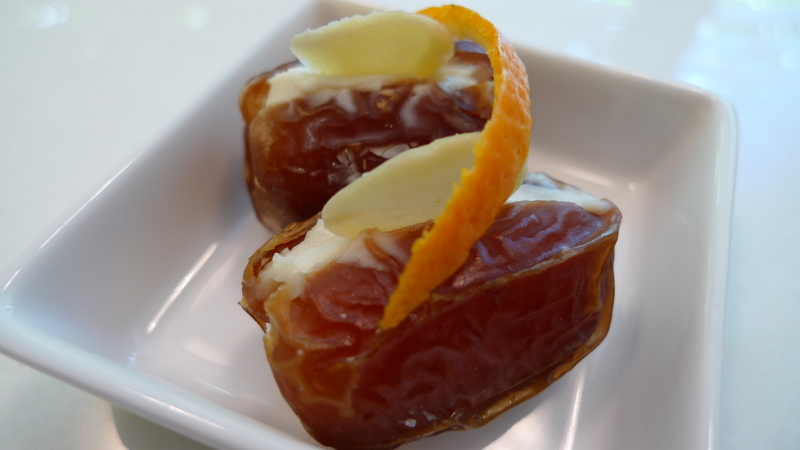 An amuse bouche of sedai dates stuffed with a little French chèvre (soft goat cheese) and a sliver of almond.  What a tasty combination!  The orange rind, which I should have salted, was more for presentation than flavor.  Had it been salted, I think it would have been a nice contrast and would have really stimulated the appetite. 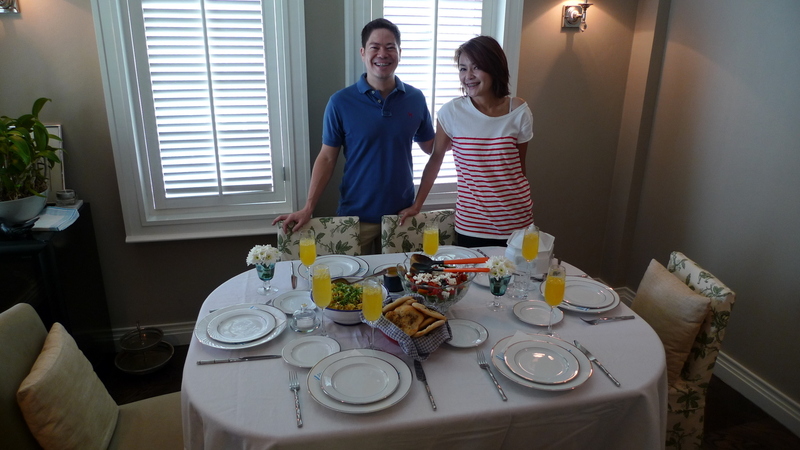 Two of our four guests – Doug and Bee.  Doug is a fellow American who lives in our neighborhood.  Credit goes to Tawn for the elegantly understated table setting. 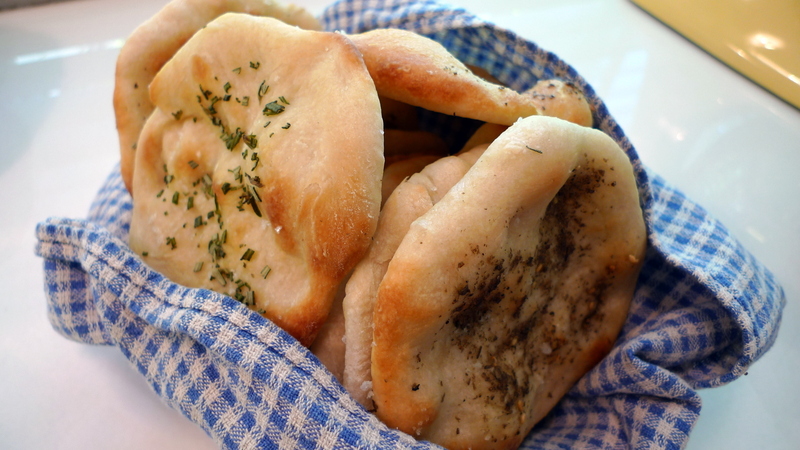 Two types of flatbreads.  Both were brushed with melted butter and sprinkled with coarse sea salt.  The one of the left has freshly chopped rosemary.  The one of the right has za’atar, a Middle Easter spice mixture that contains oregano, thyme, basil, savory, and sesame seeds. 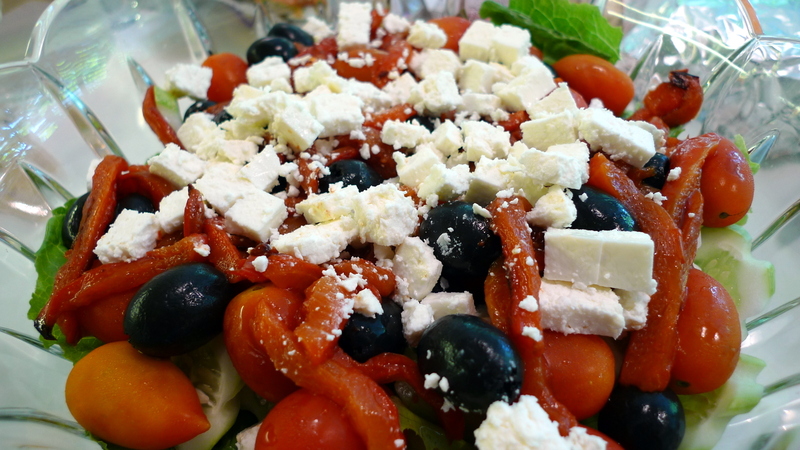 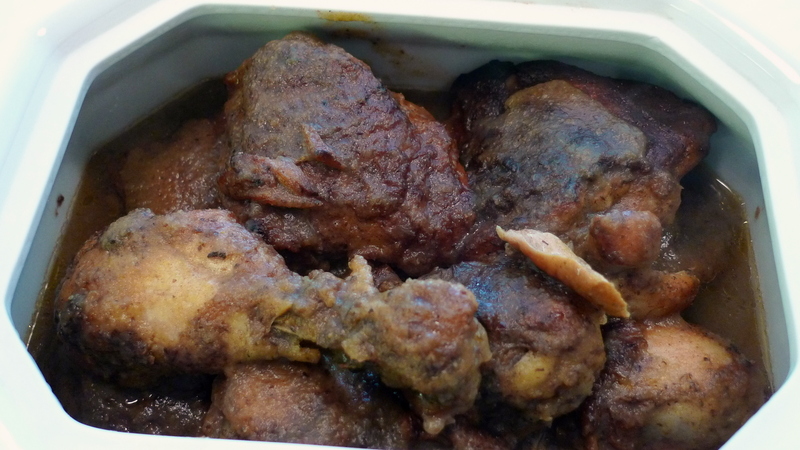 The main course was the Moroccan style braised chicken.  This picture doesn’t quite flatter the dish, which I thought was the standout of the meal.  Wednesday’s Moroccan Pork Chop dinner (my blog entry about it and the original recipe I followed) was the starting point.  Based on what I learned from that recipe, I repurposed it for chicken.  Zakiah suggested a recipe for tamarind-date sauce (thank you – what a great idea!) and I extrapolated from that and braised the chicken instead of just pan frying it.

The chicken was brined for four hours in a mixture of buttermilk, salt, and cayenne pepper.  While it was brining, I created a tamarind-date sauce.  This was a learning experience as I haven’t worked with tamarind paste before.

Tamarind paste comes from the flesh of the ripe fruit of the tropical Tamarind tree.  The flesh is very sour with just a hint of sweetness.  Mashing the paste in a little warm water, you can extract a thick liquid with which you cook.  A little goes a long way!  To make the sauce, I sauteed an onion with the same spices I used for the chicken.  Once the onion was soft I blended it with chopped dates and the tamarind water.  Then I thinned this mixture with broth and cooked it down for a few minutes.

While the sauce reduced, I rinsed, patted dry, and dredged the chicken pieces with a spice mixture, then pan fried them a few pieces at a time.  Once all the pieces had formed a nice crust, I returned them to the pot and added the tamarind-date sauce, covered the pot and cooked for an hour at low heat until the chicken was tender and cooked through.  The nice thing about this recipe was that it could be prepared the day before then reheated.  Tender, flavorful, and convenient. 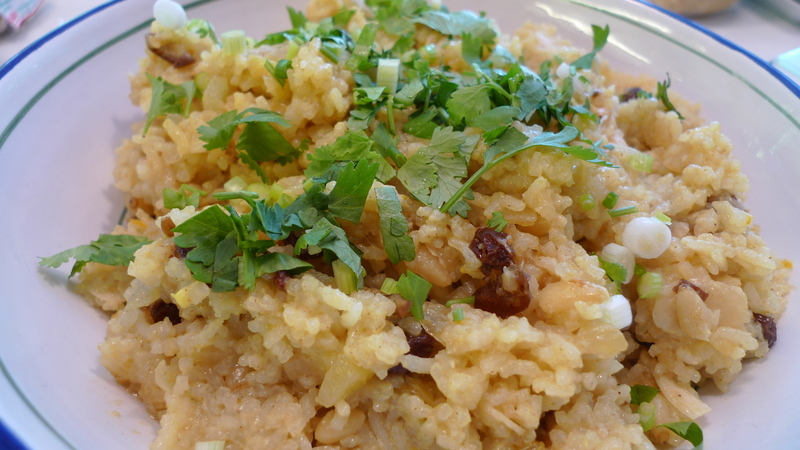 To accompany the chicken, I made another batch of the Moroccan style rice.  (Recipe I started with but I modified it a lot as I don’t cook with a microwave.)  I was out of apricots so used dates, raisins, and dried mango to accompany the rice.  Interestingly, this batch turned out much softer and mushier than the one I made Wednesday.  I used the same type of rice and proportion of rice to liquid as before, but the rice was from a new bag.  All I can figure is that this bag of rice was younger and didn’t need as much liquid.  Still, plenty tasty! 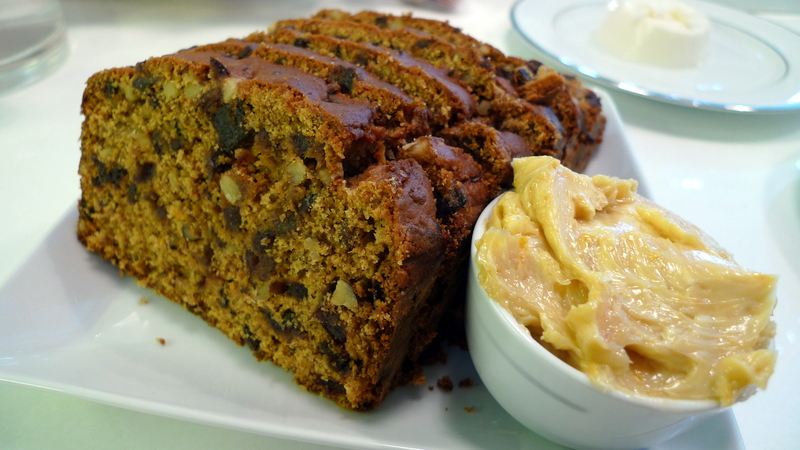 For dessert, we has two items.  The first was a date nute bread (recipe) from Ina Garten of the Barefoot Contessa series of cookbooks.  This is a quick bread similar to banana bread or zucchini bread.  I think I overcooked it a little as it was dry.  Tawn, however, likes his food drier than I do, so he thought it was perfect!  Toasted, I think it would make no difference.  On the side is a tub of butter whipped with a little honey and orange zest. 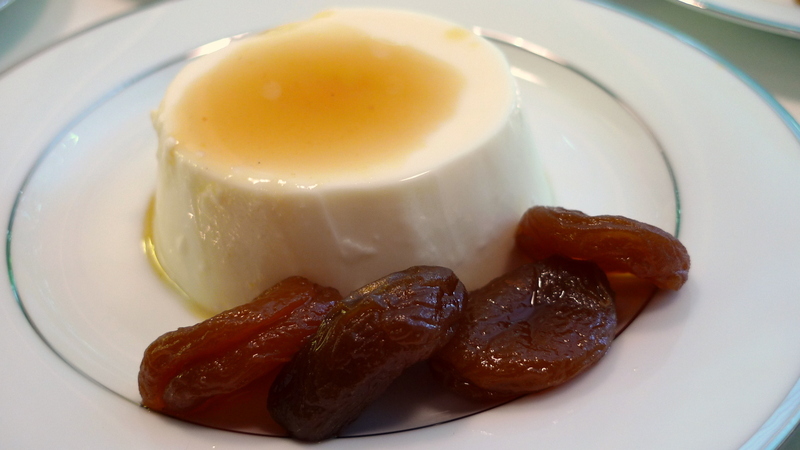 The final dish was a Greek Yoghurt Panna Cotta with dried apricots reconstituted in a white wine and honey sauce.  (Recipe) This turned out very nice as the panna cotta is not overly sweet and has a nice tanginess from the yoghurt.  Of course, by this point we were stuffed, and smaller servings would have been fine!

All in all, the brunch was a success.  Pleasant company and conversation, most importantly, and the food turned out nicely, too!