In the hours before I left the US to return to Thailand, I completed some shopping for Ron and Kari.  Ron and Kari are missionary friends up in Chiang Mai, Texans who have lived in both Thailand and Kenya for their missionary work and who are accustomed to suffering without the comforts of home.  Before leaving, I asked them what I could bring back for them and the answer was Jell-O instant pudding mix. 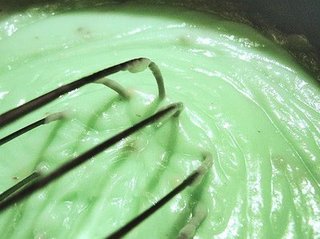 The market I stopped at had a wider selection of flavors with the house brand, so I loaded up on French Vanilla, Chocolate, Butterscotch, and other flavors.  Then I came across pistachio.  It wasn’t on their list but I decided to buy a couple of boxes for me, for memory’s sake.

Normally I’m against processed foods, particularly those with an ingredient list as disturbing as what you will find in a box of instant pudding mix.  Sugar is the first ingredient, followed by different types of starches, followed by a whole host of multisyllabic compounds that fall generally into the “sodium” category.  But I decided to get some because of the fond memories I have of my paternal grandmother making pistachio pudding when I was a child, spending time down at her mother’s home in the 1,000-person town of Cole Camp, Missouri.

We would spend time down in Cole Camp each summer, playing in the backyard and the park across the street, going on trips to the creek where we would wade in the water and spend a long time holding fishing poles but not catching any fish.  And somewhere in those memories is the memory of pistachio pudding, cold, creamy, and bright green with little reconstituted chunks of nuts, served after dinner.

Making a batch this week, the smell and taste and texture were all as I had remembered them, although the memories were more enjoyable than the actual eating of the pudding.  I guess over time our tastes change, even if the memories don’t.