Protests be damned – one still has to eat.  With a couple of friends in town from San Francisco, we headed out Saturday evening to Ruen Mallika, a long-standing Sukhumvit area restaurant that specializes in Palace Cuisine, a particularly rarified form of Thai cooking that reflects the highest levels of attention to detail and quality. 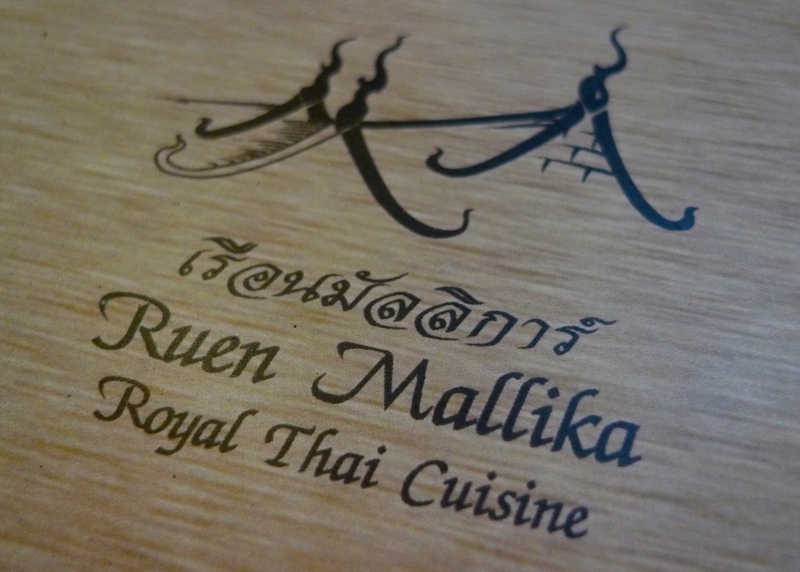 Located in a rambling old home that dates back over 100 years deep down Soi Sukhumvit 22, Ruen Mallika is hidden in a corner of the Asoke neighborhood that reminds you that Bangkok isn’t all Skytrain stations and air conditioned malls.  Still, there is an air of sophistication and traditional Thai hospitality at the restaurant, which is beautifully decorated, that makes you feel like your are a guest of honor in a court regent’s home.

The menu is a huge binder with the largest, glossiest, sexiest photos of Thai food I have ever seen.  Even a strong man will risk back strain with this menu.  Tawn ordered for us, a bit too much food but perfectly balanced choices that, together, formed an exquisite dining experience and a wonderful final night with which to celebrate our visiting friends’ engagement. 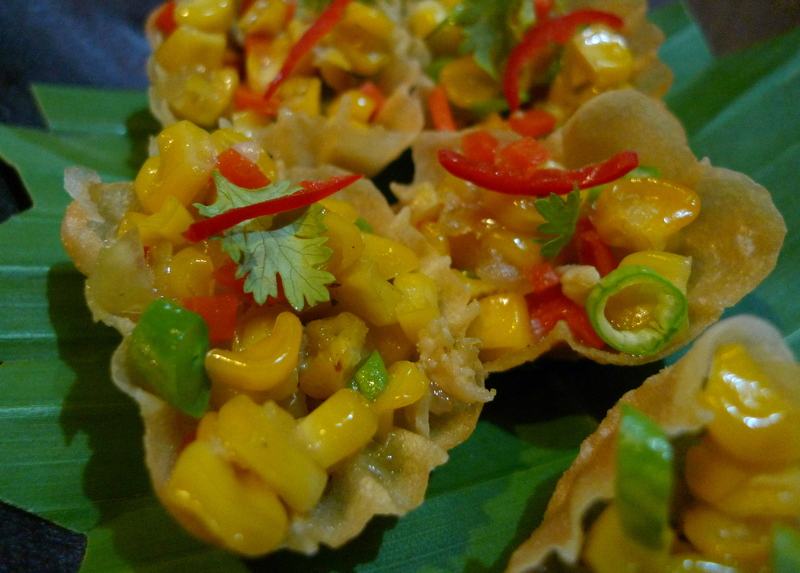 After being seated in the fan-cooled garden, the kitchen sent us an amuse bouche of gratong tong, “golden baskets” – crispy fried shells filled with corn, green onions, ground pork, and pepper. 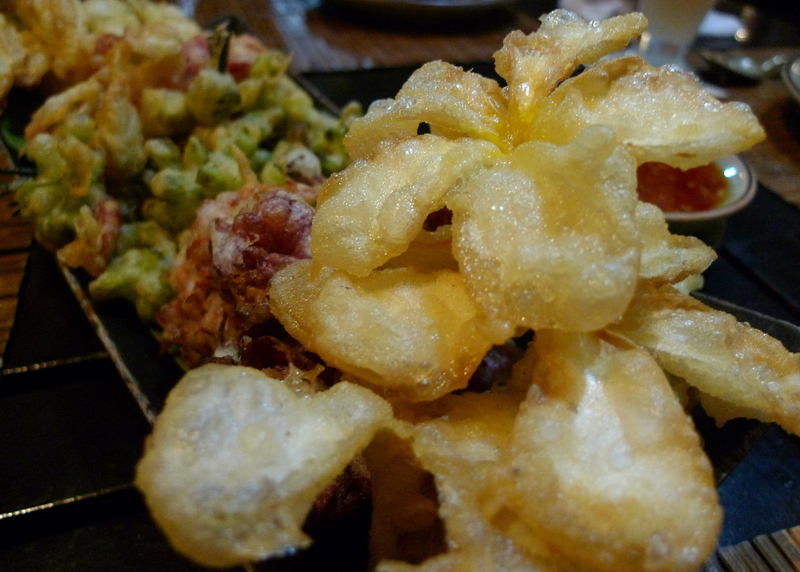 As an appetizer, we ordered a platter of chan chu butsaba – literally “My name is flower” – a selection of flower tempura in a long dish that fills the center of the table. 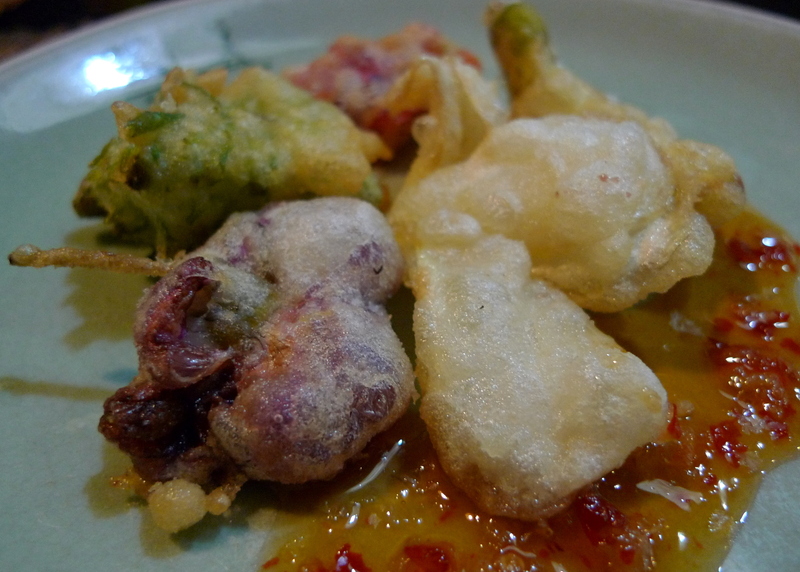 Interesting story about the plumeria:  When Tawn was growing up the flowering tree was called ton donlantom, which means “very deep sorrow tree”, and was often planted near graves.  But people liked the beautiful flowers and the shape of the tree, especially in the beach provinces where it is common (it is the flower of Phetchaburi Province) so the tree was rebranded by the Royal family as ton leelawadee, which means “beautiful motion tree”.  This is well-suited to the graceful shape of the branches. 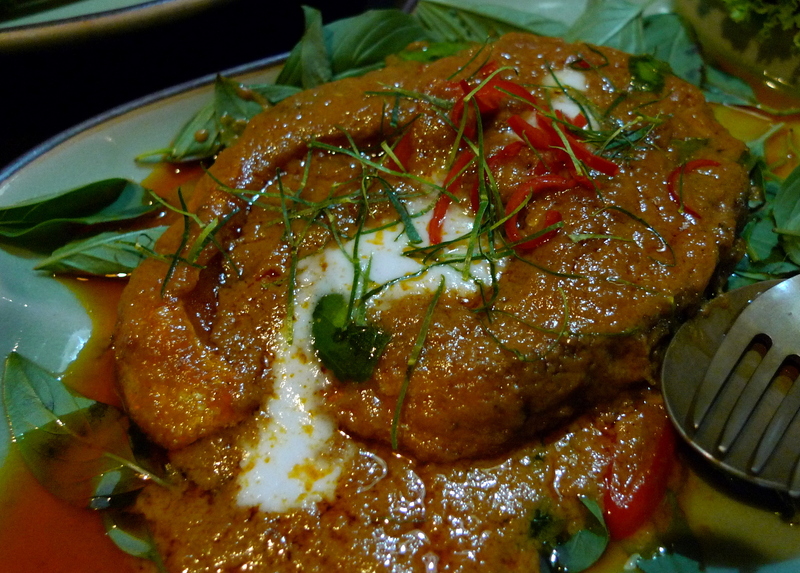 Our first course was a curry – Penang plaa salmon – Salmon Penang curry which is not very spicy but has a rich flavor enhanced by the thinly-sliced Kaffir lime leaves.  Something that sets Royal (or Palace) Thai cuisine apart from regular Thai food is that the dishes have more complex layers of flavor.  For example, the Kaffir lime adds a subtle citrus note to the top of the deep bass of the curry. 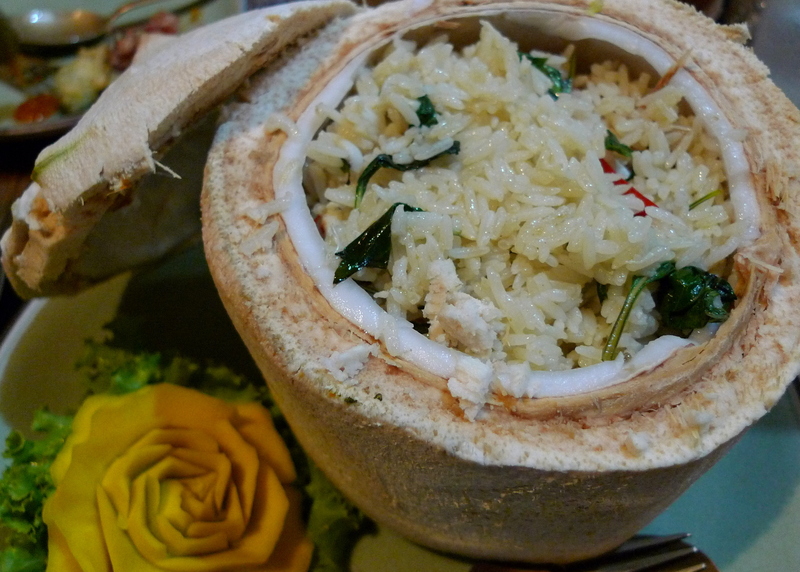 The salmon arrived with khao pad Amphawa – Amphawa style fried rice.  Amphawa (home of the nighttime floating market I’ve written about) is a town in Samut Songkhram province known for its coconuts.  This fried rice includes mixed seafood and fresh young coconut meat served in a coconut shell.  Notice the beautiful “flower” garnish, which is carved from a pumpkin.  This dish is served with a glass of fresh coconut juice, which was poured from the coconut before the rice is served. 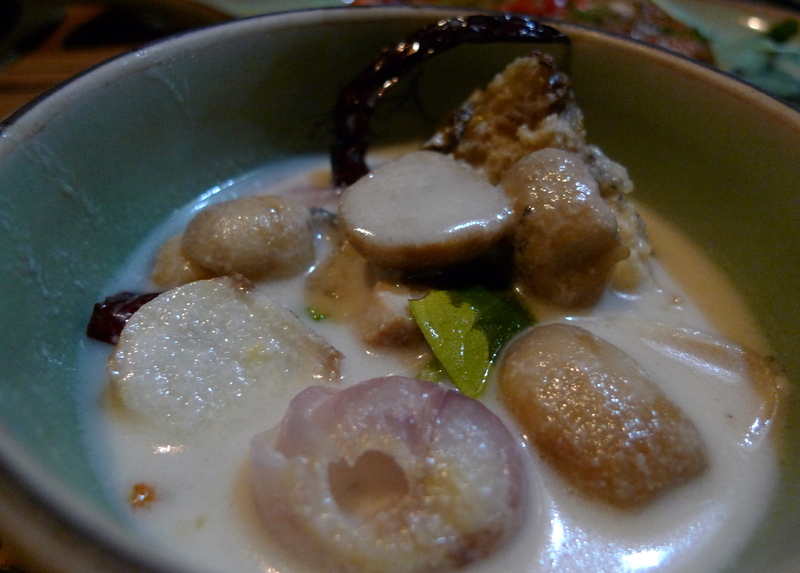 We then enjoyed the soup course, a variation on a classic Thai soup called tomka plaasalid.  You may recognize this as the “tom ka gai” soup – chicken and coconut milk soup – that you enjoy at your local Thai restaurant.  However, this version has a special Royal Thai cuisine twist: it is made with plaasalid, a sundried small whitefish that gives the soup a distinctive smoky flavor, and tamarind leaf tips, which give a sour, tangy flavor to the soup.  To top it off, this soup was made with freshly squeezed coconut milk, which is every bit as rich as cream. 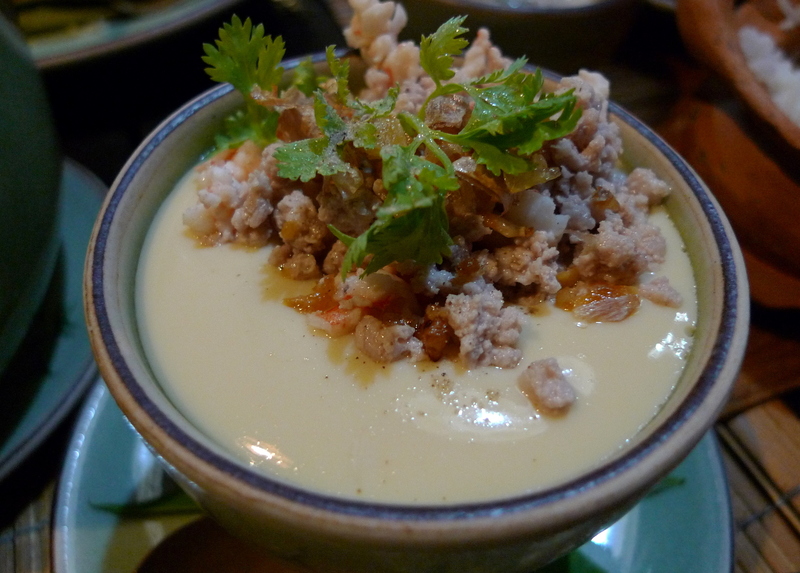 We then enjoyed kai tune – a baked egg custard that has a shrimp, pork, thousand-year old egg, and garlic mixture on top.  Very delicate and silky, this dish was simple in construction but rich in flavor. 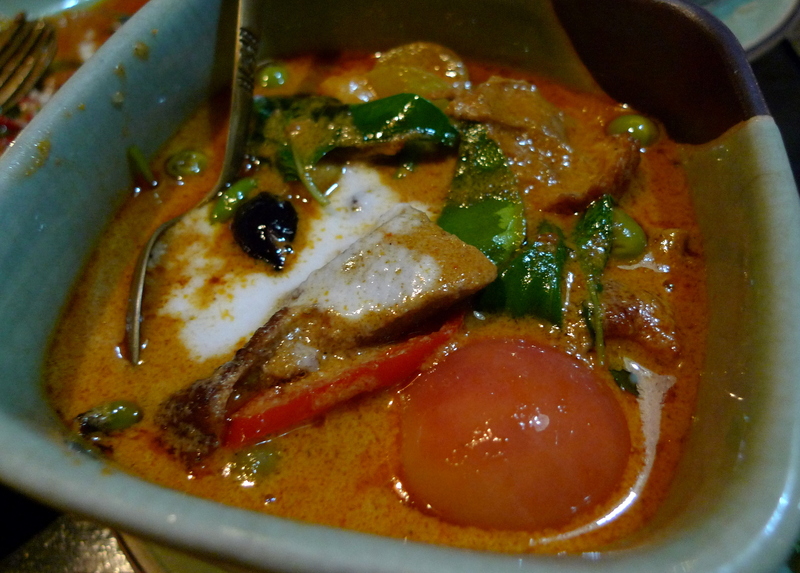 We had a second curry, this one a gaeng ped pbed yang, a grilled duck curry.  This dish has grapes (or sometimes lychee) in it, providing a foil to the gamey flavor of the duck.  The small green spheres are baby eggplants (not green peas as some foreigners expect) which lend a bitter crunch to the dish. 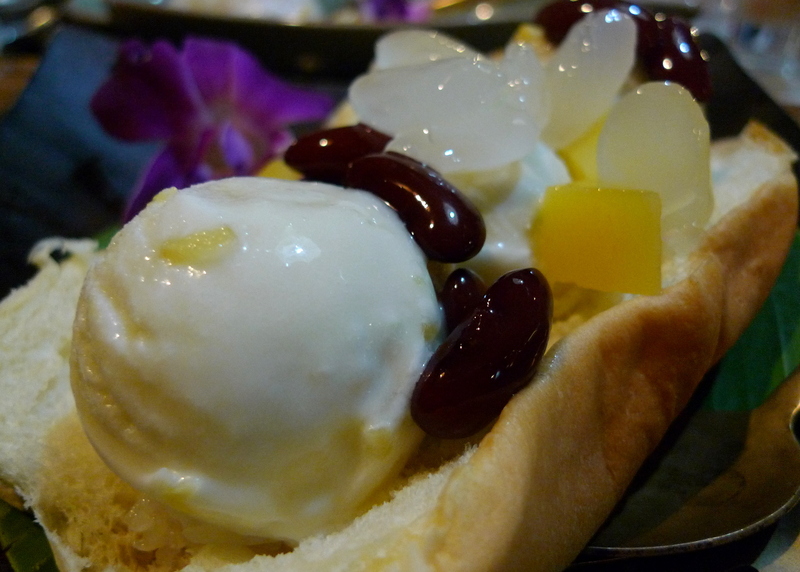 For dessert, classic “street vendor” style ice cream.  Homemade coconut ice cream served on a sweet bread bun with kidney beans, palm hearts, and candied sweet potato.  This is often served with a splash of sweetened condensed milk, although in this case the restaurant kept it plain. 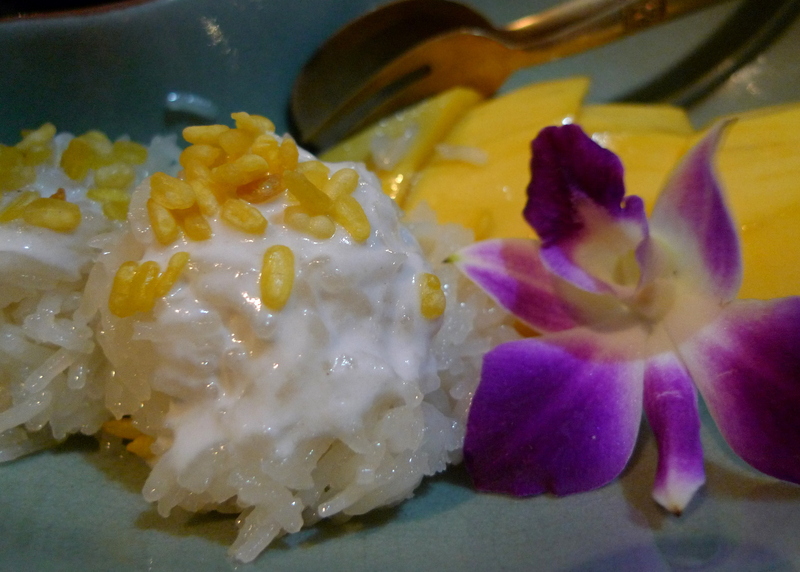 And of course, being the tail end of hot season, how could we not enjoy some khao niaw mamuang – sticky rice with mango? 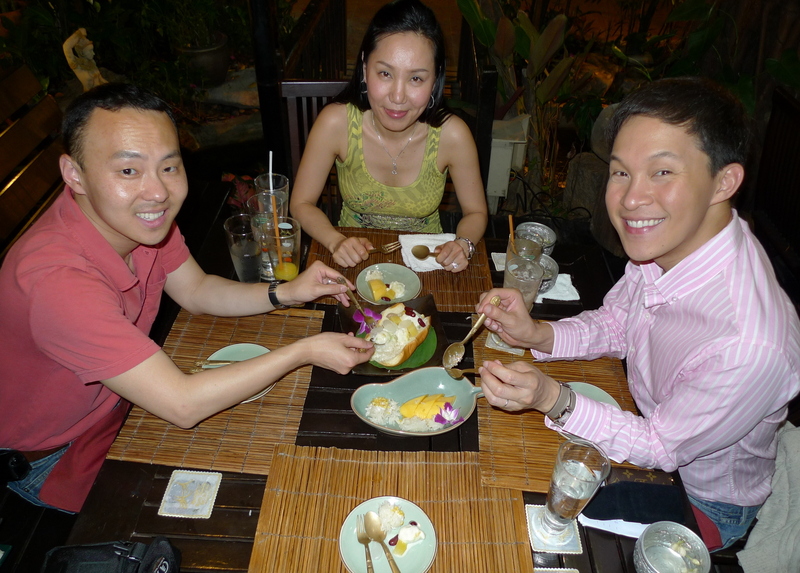 Paul, his fiancee Hey Jung, and Tawn battle over dessert.