Lots of friends, family, and other people have inquired as to my wellbeing.  “We saw the news,” they say, “and it looks like a civil war has broken out in Bangkok.”  While I appreciate the concern, I would like to add some perspective to what you are reading and seeing in the news in your respective countries.

The New York Times’ Thomas Fuller posted an article today that gives the impression of living in a war zone:

“Over the past two months, as a debilitating protest in Bangkok took hold and shadowy groups have operated with impunity, I have crouched behind furniture in hotels when grenades exploded on the street outside. I stood on a wide avenue as dozens of dead and wounded protesters were carried from the carnage of a failed military crackdown. I hid behind a telephone pole during an hourlong crackling barrage of gunfire. And on Thursday, a man I was interviewing was struck in the head by an assassin’s bullet and collapsed at my feet.”

What Mr. Fuller hasn’t made clear is that this isn’t the typical scene in Bangkok.  It is the scene he has faced by choosing professionally to put himself in dangerous places in order to capture the story.  While I greatly respect his dedication to his work, I think it presents a very misleading impression of the city. 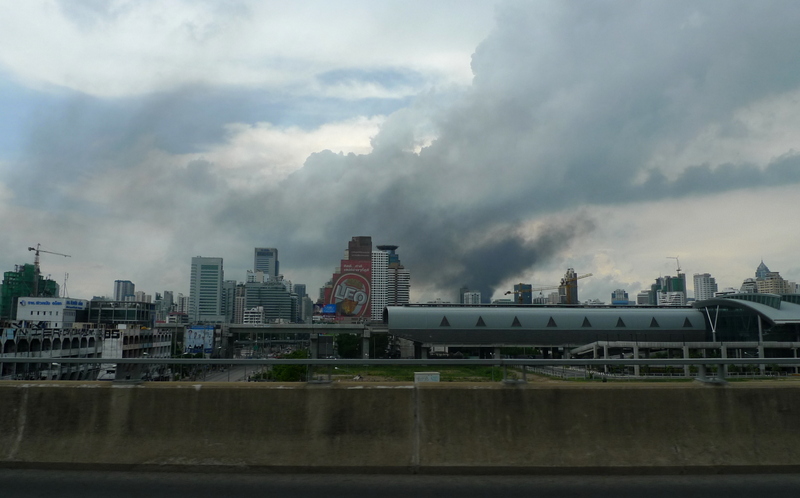 Above: (my picture) Smoke from the Bon Kai neighborhood on Rama IV Road where protesters set a large number of tires on fire, accidentally sparking a blaze that consumed a nearby convenience store.  The new Airport Express station is in the foreground and Asoke Road is on the left side of the picture.  Below is an image (near as I can figure) of the same fire, taken by the Bangkok Post. 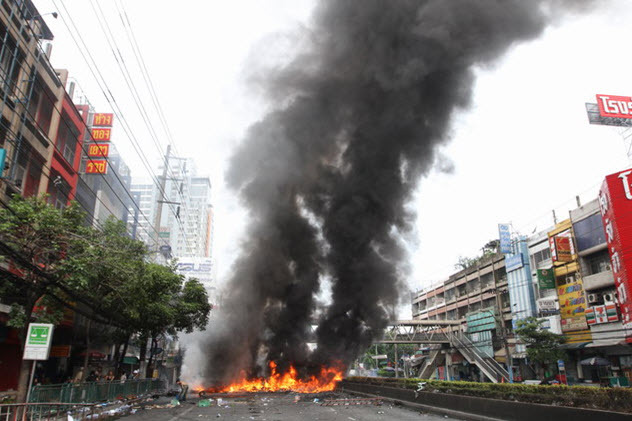 First off (and I swear, I’ve written an entry like this before), Tawn and I are fine.  We are at home, located in a safe section of the city a few miles away from where the military action is.  Our neighborhood is pretty much business as usual, although not quite as busy as normal.  The government has announced a curfew at 6pm tonight for certain sections of the city, although it is not clear that our area will be included.

Second, while I want to acknowledge the seriousness of what is happening and my worry for the wellbeing of all those involved in (and living near) this conflict, I want to also stress that this is not out and out anarchy.  Here’s the long and short of the situation:

After forty days of occupying the Ratchaprasong shopping district and agreeing to, and then backing out of, a negotiated settlement with the government, the United Front for Democracy against Dictatorship (UDD / “Red Shirts”) have reached the end of the line.  Amid increasing impatience from the residents of Bangkok, the government has set up a perimeter around the one-square mile protest area, blocking entry of people and supplies.  Protesters and residents are allowed to exit but cannot enter.

In the first three days of the military’s blockade, UDD’s numbers have reduced to an estimated 6,000.  There have been a dozen or so skirmishes leaving about two dozen people dead.  Several barricades of tires have been set aflame and dozens more people are injured. 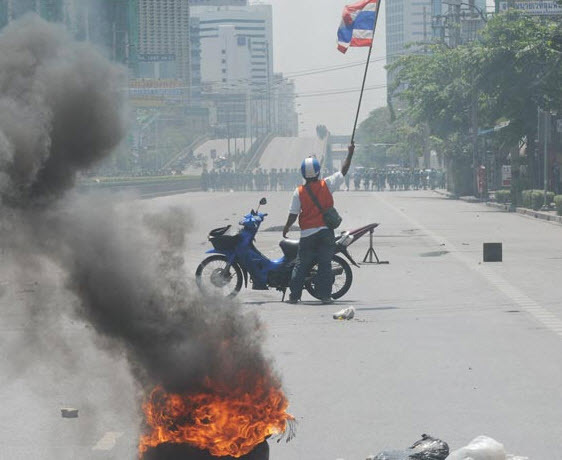 Above, an iconic image of a motorcycle taxi driver facing off against a line of army troops.  The flyover in the background goes over Sathorn Road.  Image from The Nation.

At this time, the military has not moved to actively clear the protesters out of their area, content to cut supplies and weaken their morale.  From what we hear, the government this morning announced that protesters have until 3pm Monday to clear out of the area.  They are offering to provide transportation home for anyone who is willing to leave the area before then and will not charge them with criminal acts.

No word on what happens after 3pm Monday.  Presumably after that point the military will begin to actively break up the protest.

We’re staying out of the way and have stocked up on food, water, and other supplies in case we have to stay home for several days.  Nonetheless, I don’t think any of you need to worry.  We just had visitors in town who left this morning to continue their journey.  They were able to see the sights and we just worked around the protest area.  We had friends over this weekend for dinner.  They were able to come and go without incident.  On the whole, life is continuing.

I hold out hope that a peaceful settlement is reached and all sides agree to step back from the brink.  In the meantime, though, it is good to understand what is going on from a beyond the headlines perspective.

That’s my perspective on things.  I hope it helps you place the news you are reading in context.

0 thoughts on “Some Needed Perspective on the Bangkok Protests”