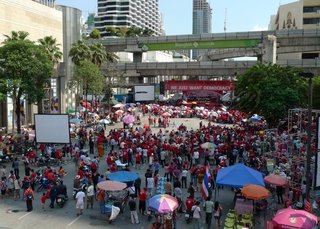 An article that appeared in the New Straits Times provides a pretty accurate and impartial summary of the current political situation in Thailand and what has led to it.  It is consistent with several points I made the other that were raised at the Foreign Correspondents’ Club’s panel discussion.

Thailand’s poor have decided that docility is a thing of the past. They are angry and frustrated by the status quo and are clamouring for change.

In other prosperous democracies, the middle class provides the glue that holds society together. In Thailand, by contrast, the bourgeoisie, centred in Bangkok, is barely emerging as a social and political force.

Instead, for a half-century, an unspoken social contract among four broad groups has held Thailand together…