After a false but rampant rumor Friday afternoon that the government troops were about to make a move on the protesters at Ratchaprasong intersection, the troops finally moved at 2:00 Saturday afternoon.  They are simultaneously taking back the protesters’ base camp along Ratchadamnoen Road in the old city as well as the streets mentioned in my previous entry around Central World Plaza and Siam Paragon. 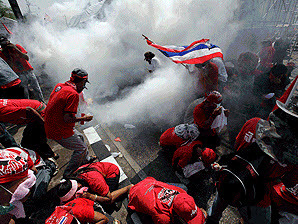 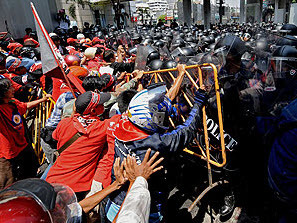 After the government specified the eight levels of engagement they would use in Friday’s newspapers, ranging from “show of force” to “tear gas” to “rubber bullets,” everyone was certain the clearing out would happen on Friday afternoon.

The protesters, though, acted first and caused the government to lose face.  First, they successfully overpowered soldiers protecting the Thaicomm cable TV station, the one that had been broadcasting the UDD’s “People TV” until the government forced them to stop.  In the process, the protesters obtained a significant cache of weapons and ammunition.  There were suggestions afterwards in the media that the army was having a problem with “watermelons” – soldiers who were Red Shirts at heart but dressed in camoflage.

In the second affront to the government, protesters converged on the police headquarters to prevent the police from deploying riot gear and officers.  At the front of the Red Shirts’ crowd was a row of monks, many of whom are from the north and support the UDD’s efforts.  (I’ll save my commentary about the appropriateness of their involvement for another time.)  The Red Shirts figured the police would not attack the monks so it seems they were planning on using them as holy shields to gain entrance to the police compound.

In response, the police put a line of policewomen at the front of their ranks.  This may seem puzzling at first but one of the key tenets of Buddhism is that monks may not touch or be touched by women.  (A very serious matter within the conditions of being a monk.)  So the police figured that putting women at the front of their ranks would prevent the monks and the crowd of Red Shirts behind them from advancing.  It seemed to work.

It is now after 4 in the afternoon.  The Skytrain is closed (to enable rapid troop movement if the streets are blocked) as are all businesses in the central business district.  Hotels in the area probably locked down.  For a second consecutive day my evening plans have been thwarted.

One interesting “coincidence” to consider: in this morning’s Bangkok Post there was an article in which the Prime Minister was conceeding that the government had lost face yesterday but promising they would step up to the challenge.  Smack in the middle of the article was a paragraph that seemed strangely out of place:

“In terms of the military operations, it will be [deputy army chief] Gen Prayuth taking charge,” said the source, adding that highly-respected figures have sent a signal to the prime minister and Gen Prayuth to end the demonstration before the Songkran festival, which starts on Tuesday.  Privy Council president Prem Tinsulanonda is reportedly hopeful that he will be able to accept well-wishers during the Songkran holiday.”

This last sentence is shocking.  The Privy Council is the group that directly advises the throne.  I’m amazed that the Post would suggest that this group might have any direct involvement in the political activites as they are supposed to be above politics.  After the September 2006 coup there were similar suggestions bandied about and many threats against those who made them.

0 thoughts on “Troops Move on Protesters”