Those of you who follow the news from Thailand know that for almost the past week, the center of the shopping district – the Ratchaprasong intersection – has been taken over by “red shirt” protesters.  An estimated 100,000 were sitting in the street and plaza outside Central World shopping center this weekend and while the numbers have diminished significantly, the area is still paralyzed.

And as the Kingdom bakes under warmer than normal temperatures during what is already the usual peak of our hot season, tensions are rising on the political front.  I went down to the area yesterday to take a look around and snap some photos.

I’ve updated my initial entry with some more pictures, explanation, and responses to your questions and comments. 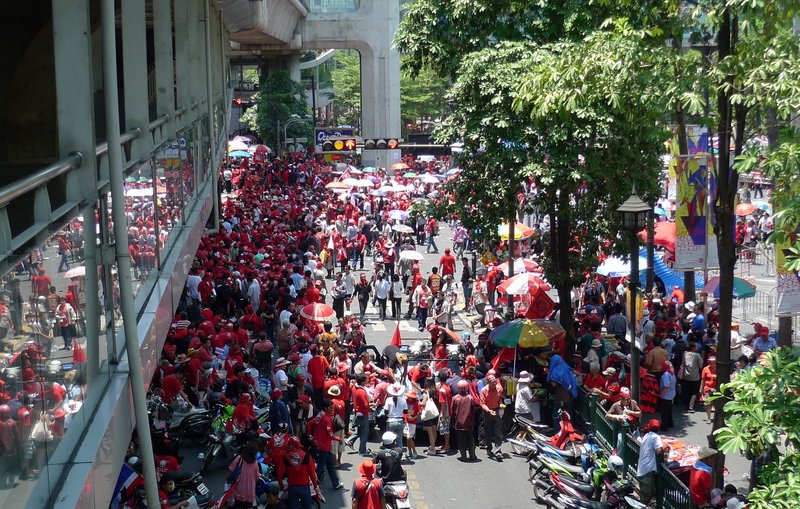 Looking west towards the Ratchaprasong intersection from the walkway that leads to Gaysorn Plaza, which is to the right of this picture.

Who are the Red Shirts?

The “Red Shirts” are a coalition of interested parties under the banner of the National United Front for Democracy Against Dictatorship (UDD).  They are mainly supporters of Thaksin Shinawatra, the former Prime Minister who was ousted in a September 2006 coup and subsequently convicted in absentia to two years in prison and the seizure of about $1.3 billion in assets on charges of corruption.  The UDD also represents some other interests, including those who aren’t supportive of Thaksin but who are against the coup and what they see as subsequent interference with the democratic process by a military/judicial elite. 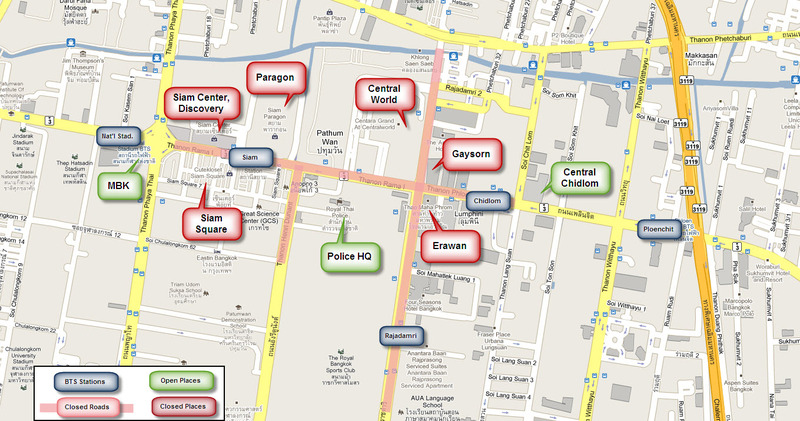 A map of the area around Ratchaprasong intersection that is affected by the protests.

While there are scattered protests in other areas of the city, especially in the “Old City” where the government ministries are, the area that is attracting the most attention at the moment is the Ratchaprasong intersection.  This is where Rama I Road (what turns into Sukhumvit as it heads southeast) and Rajadamri Road meet at the heart of the shopping district.

Is it paralyzing the city?

Vivek asks about the effect it is having on everyday life in Bangkok.  Central World Plaza, Gaysorn Plaza, and Erawan shopping centers are all located right at the intersection.   It is also the site of the popular Erawan Shrine, often mistakenly called the Four-Face Buddha by tourists.  Siam Square with the Paragon, Siam Center, and Siam Discovery shopping centers is only a block away.  These six major shopping centers have a combined floor space of more than four times the Mall of America’s and have been closed for almost a week now causing an estimated 200-300 million baht ($6-9 million) in losses per day. 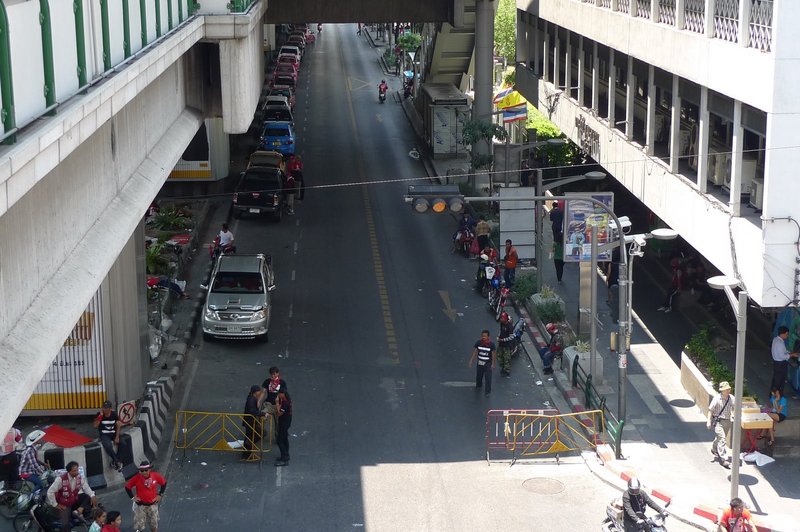 UDD guards have set up barricades and are limiting traffic on the affected streets to only local traffic.  For example, the Intercontinental, Holiday Inn Ploenjit, and Renaissance hotels are all in the affected area.  Taxis and private vehicles going to and from these hotels are allowed to enter.  Notice that in the picture above there are no police offers – they seem to be keeping their distance and letting protesters handle things.

Other businesses in the area are shut down or are operating on a very limited basis.  Hotel bookings in the area are down significantly and bookings and tourist arrivals are off about 30% from normal for this time of year, particularly bookings from elsewhere in Asia.  The Stock Exchange of Thailand dropped about 3.5% Thursday on news of the latest emergency decree and anticipation of a worsening political environment.

As for those of us who live here, it is kind of like having the middle of your living room be a no-go zone.  You can still live in your house and get around, but you have to avoid one of the main areas that you would regularly travel to for work or entertainment.  It is inconvenient but not impossible.  Thankfully, this is the slow season for tourism and it is also summer break for students, so there is already less traffic than normal. 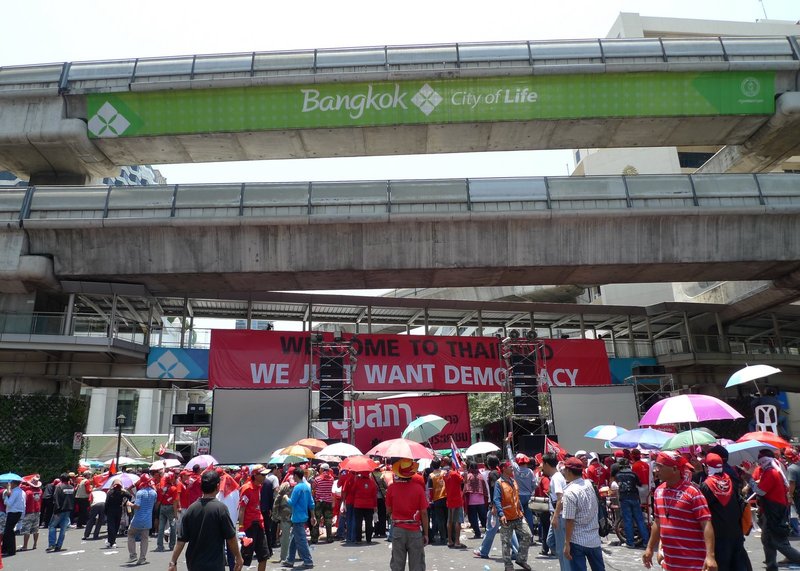 Looking south at the Ratchaprasong intersection.  The Erawan shrine beyond the stage and to the left.  Central World Plaza is back over your shoulder to the right in this picture.

At the main intersection, a stage is set up beneath the BTS Skytrain tracks.  There is a bit of irony in the placement of the stage beneath the metropolitan government’s “Bangkok – City of Life” advertising. 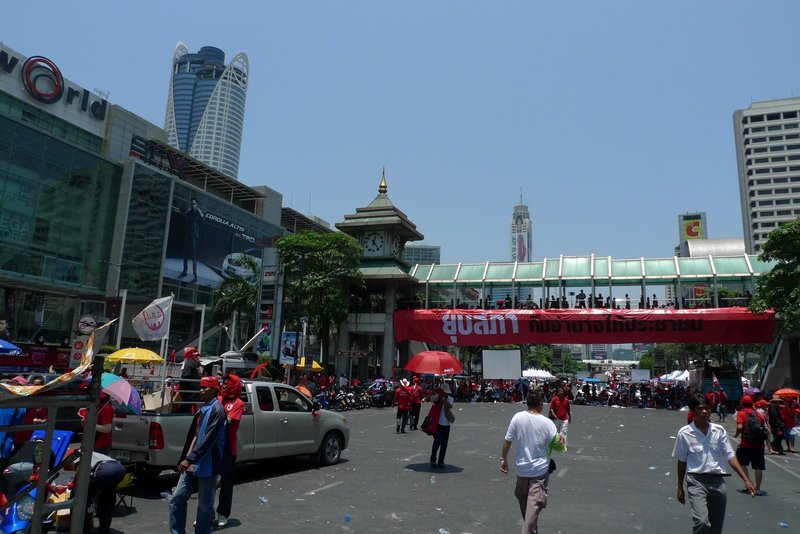 Turning around 180 degrees and looking north along Rajadamri Road, Central World Plaza is on the left.  There is a second pedestrian walkway in the distance.  Over the weekend the entire street stretching beyond that second walkway was filled with protesters.  At noon on a Thursday the crowds had dwindled and most were seeking refuge in whatever thin stretches of shade they could find. 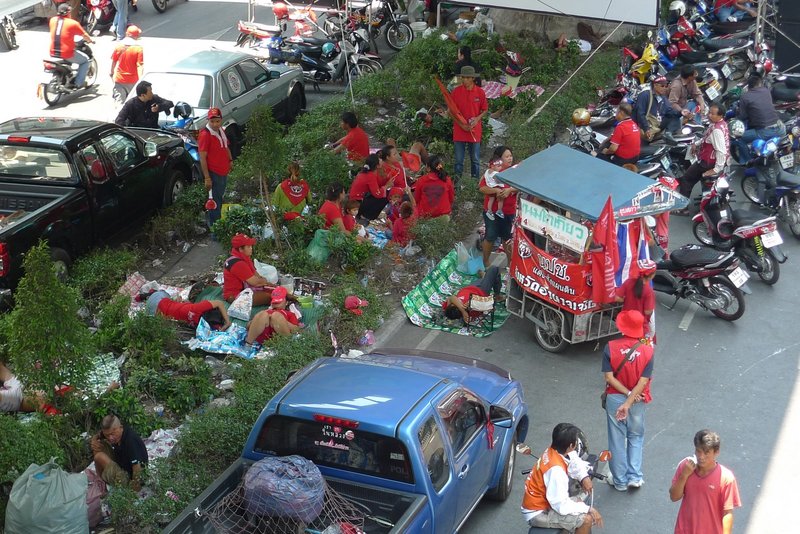 Protesters camp out in the median strip foliage under the Skytrain tracks.  Based on the number of plastic bags and other bits of rubbish strewn about, the UDD isn’t doing a very good job caring for its environment.

Rob asked whether protesters are there of their own volition or whether they have been paid to be there.  There is no doubt that in a country where the vast majority of people earn less than $150 a month that there has been some compensation in addition to assistance transporting them to the capital.  These protests have gone on for more than four weeks in different parts of the city.  There are reports that protesters have received up to 2000 baht – about $60 – to come to the city.  Most of the supporters are from the Issan region, northeast Thailand, a very poor and relatively dry area in comparison to the rest of the country. 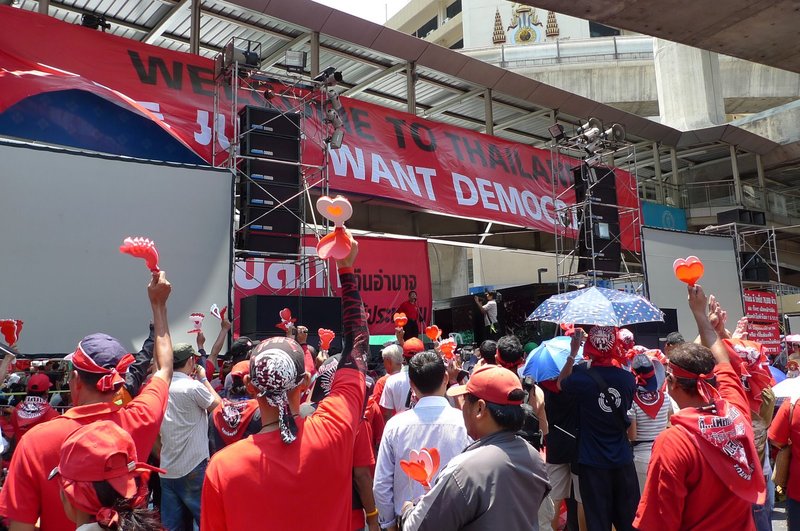 The banner reads “Welcome to Thailand – We just want democracy”

Is it safe for you to be there?

Jason asked after the safety of me going to the protest area and several other people raised their concerns about my safety in general.  Thanks to everyone for your concern.  In deciding to visit, I evaluated the situation carefully, first viewing it from the passing Skytrain to see what the crowd looked like, and then approaching it on foot from a half-kilometer away.

As I walked from the Rajadamri BTS station back towards the Ratchaprasong intersection, my senses were on heightened alert and being one of the only foreigners on the street, I was very cognizant of what was going on around me.  Had there been any signs of aggression or any direct conflict between protesters and security forces, I would not have entered the area.  As it was, the police have stayed well to the fringes of the protest and other than scuffles at other locations – the protesters stormed the Parliament building briefly yesterday, for example – there has been a notable lack of confrontation between the protesters and security forces. 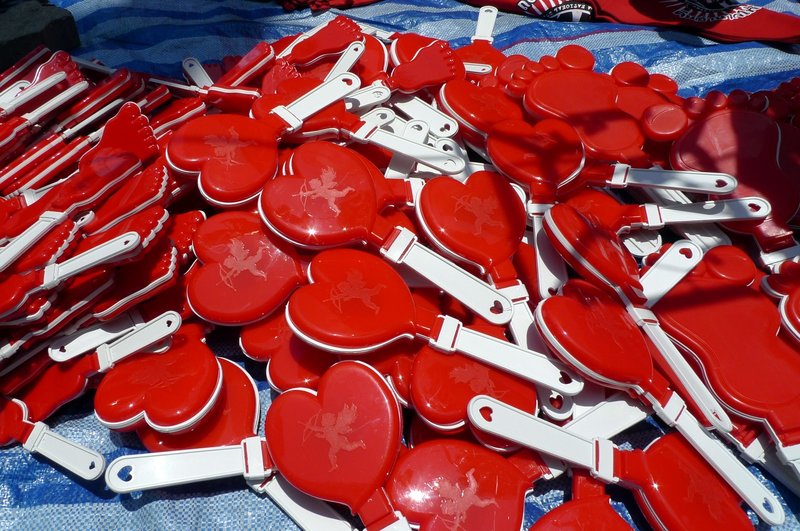 These plastic clappers have become symbolic of the UDD, who use them to cheer speakers and signify their protest.  The ones in the shape of a foot have special meaning because the foot is considered the lowest and dirtiest part of the body.  By raising your foot against whomever (authorities, military, the PM, etc.) you are insulting them.

Why is the government taking a hands-off approach?

Gary commented about the low-conflict approach that the government has taken so far against the protesters.  Among some Thais and almost all foreigners, the question has been why the police and military aren’t moving in and arresting and/or dispersing protesters who are in clear violation of the law.

The answer is complex and there are some areas of speculation I won’t get into here.  The larger, safer answer is that the military does not want to provoke a situation that could escalate into violence, much like what happened in April 2009, when police moved aggressively against protesters who responded with Molotov cocktails, bombs, and other violence.  For all their image of being peaceful people, Thais’ tempers can be as easily triggered as anyone else’s and the history of such confrontations in Thailand politics (1973, 1976, 1992) have led to the conventional wisdom that such conflicts are not resolved until blood is shed, an outcome nobody wants. 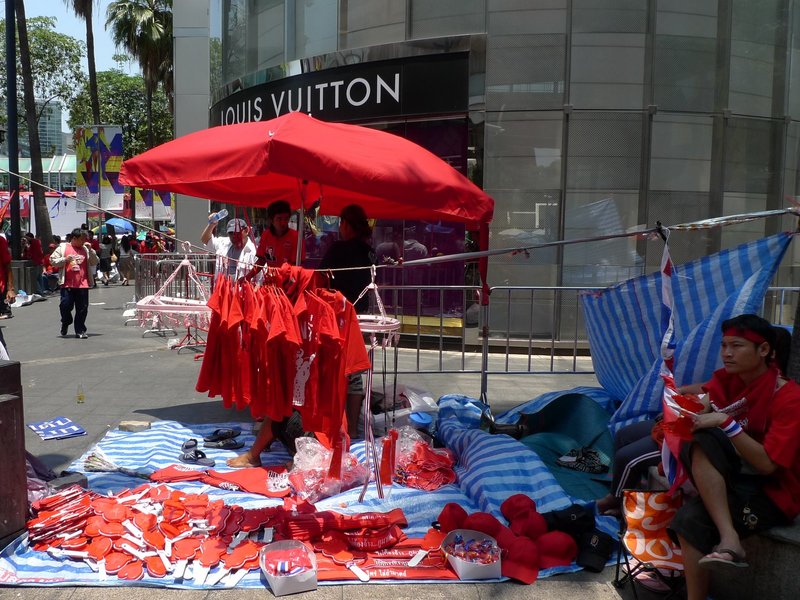 There’s always money to be made as vendors sell color-appropriate supplies in front of the Louis Vuitton store at Gaysorn Plaza.  At some point, you have to wonder which of the vendors (the foot masseuses, the ice cream vendors?) are there for capitalistic purposes rather than because of their political beliefs.

What’s going to happen next?

Meg commented that she had heard that martial law has been enacted.  While it isn’t exactly martial law, the “Internal Security Act” has been invoked, giving the government and the military more powers to intervene in affairs of safety and security.  Specifically, gatherings of more than five people for political purposes is not allowed.  Additionally, the cable TV and radio stations supporting the UDD have been shut down because they are “spreading misinformation” and “destabilizing the peace”.  The Internal Security Act applies to Bangkok and parts of surrounding provinces.

The protests show no signs of abating and while some people expect the crowds to diminish during the three-day Songkran (Thai new year) holiday next week, you can be certain that the situation will continue to simmer.  We were lucky last year to be out of the country when things boiled over and with a trip to Macao and Hong Kong scheduled for next week, perhaps we will be lucky again.

For more information: You may find this article in the Economist helpful in explaining some of the context and background of the current political situation, about which I will not write in this blog because of Thailand’s strict lese majeste laws.