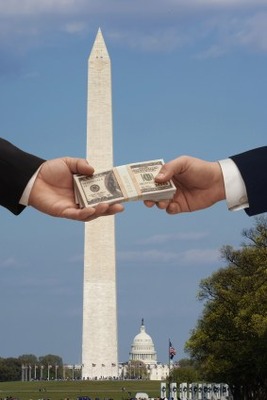 Corporations are not people.  They do not have the same inalienable rights of people.  These are two core beliefs I hold.  The individual people who are owners of corporations have their individual rights but the corporation itself, a legal contract between those owners, does not have the same rights as if it were a human being, too.  Contracts are pieces of paper, not living, breathing human beings.

Sadly, five members of the United States Supreme Court disagree with me and decided today that corporations are in fact people and have the same rights to free political speech as individuals do.

Why does that matter?  Already, the degree of influence of corporate money through lobbyists, direct donations and other political actions has reached startling proportions.  One look at the messy legislative process in creating the competing health care reform bills and you can see the dirty handprints of corporate money all over the place.  One deal cut after another until all the “reform” has been removed from the final product with the precision of a surgeon’s scalpel but with far uglier consequences.

But at least there were some attempts at limits to corporate influence such as the McCain-Feingold Act.

It matters because we as individuals, even if we all became actively involved in politics, still don’t have the financial resources of corporations.  We can’t afford to hire lobbyists, produce attack ads and smear campaigns and let millions of people know what we think.  As individuals (true human beings) we will have a limited influence on friends, family and community – and that’s only if we get involved.  Most people don’t.  The corporations will inevitably have outsized influence on the democratic process because they have deeper pockets and the infrastructure to pay attention and get involved.

You see, I’m not anti-corporate.  I don’t bemoan the spread of Starbucks or McDonald’s.  Corporations that are successful are a great example of capitalism at work – a system that I believe in.  But democratic capitalism has to respect the needs of the individual citizens as much as (if not more so) than the needs of the shareholders and consumers.  This is an important balance discussed by former Secretary of Labor Robert Reich in his book Supercapitalism.

But as we sit here bemoaning why our legislators can’t seem to step up to any of the real challenges we face, make the tough decisions, etc. we need to realize that they can’t do those things because it costs a lot of money to run for election and in order to win (and win again and again) they are beholden to the coffers of big business.

Republican or Democrat, Libertarian or Socialists, your political views don’t matter here.  The question is whether you believe that corporations and their billions (yes, billions) of dollars should be allowed equal footing with you in the arena of political ideas.  I like a sumo wrestling match as much as the next guy, but only if both opponents are sumo-sized.  In this case, it is more like an ant fighting a sumo wrestler.  And I’m afraid to tell you, we’re the ant!

0 thoughts on “DC Awash in Cash, Our Interests Washed Down the Drain”