A week ago Saturday, before I was ill, I was out riding my bicycle around Krungthep and enjoying the relatively cool weather.  After visiting the train station to see the steam locomotives, I pedaled around various districts, snapping shots of interesting things. 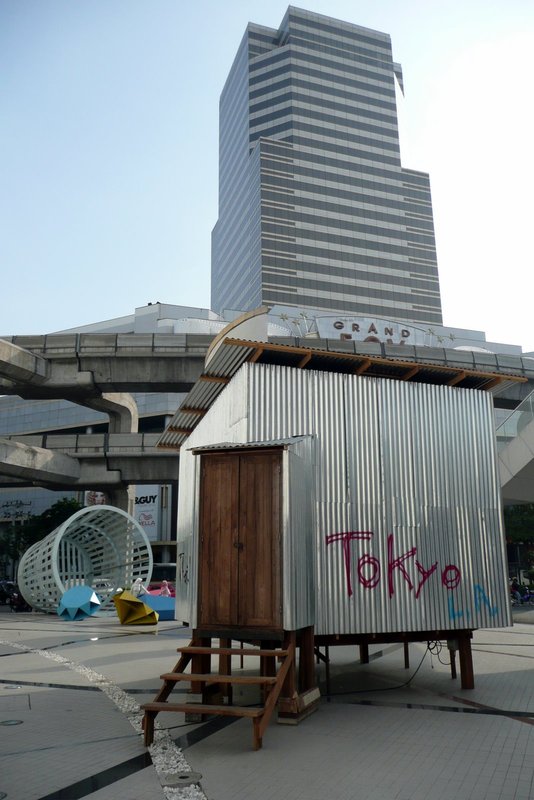 The four corners of the intersection of Rama I and Payathai Roads are fill with Siam Discovery Shopping Center, Siam Square Shopping Center, MBK Shopping Center and the Bangkok Art and Culture Center, our just over a year old museum of contemporary art.  A large public plaza lies in front of it.  There are currently several pieces on display including this metal shack that has the names of major world cities spray painted on it. 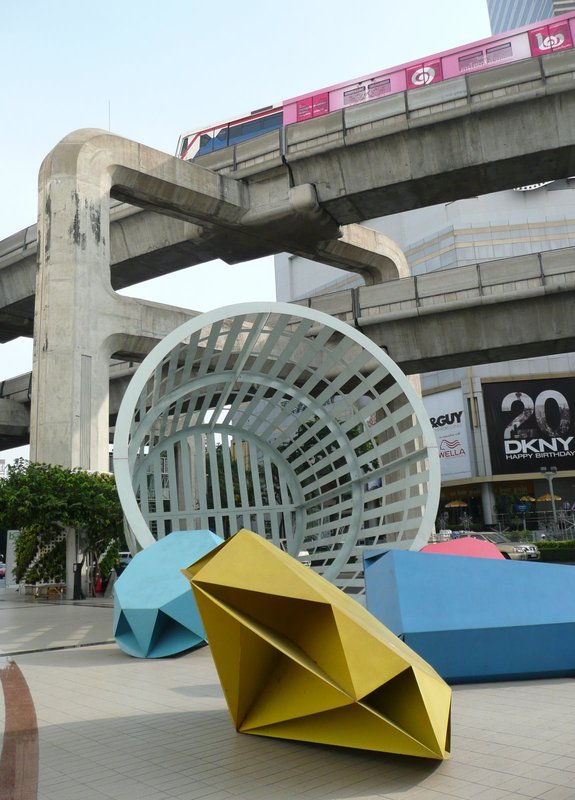 Another piece, ostensibly a meditation on consumerism, is made of these giant sheet metal origami gems spilled out of a huge wastebin.  It is actually fascinating to see how they are constructed and how effectively they resemble cut-glass gems when viewed from a distance. 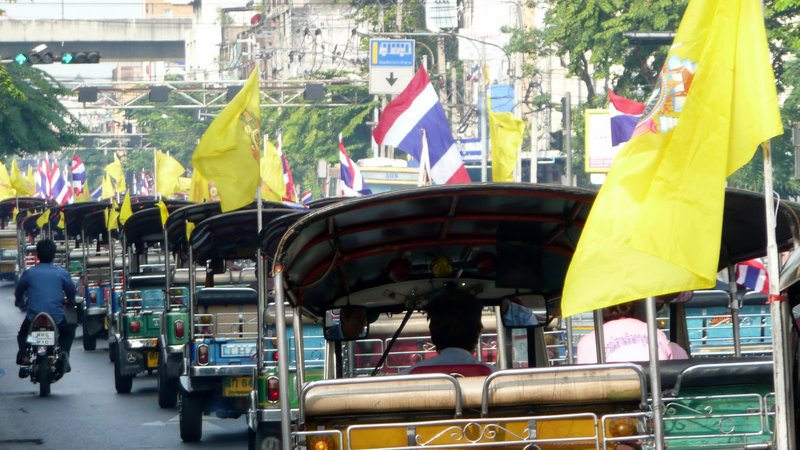 Heading further west down Rama I Road (which turns into Ploenchit and Sukhumvit Roads if you continue to the east) I encountered this caravan of tuks tuks heading to the royal plaza of Sanam Luang in celebration of His Majesty the King’s birthday, which was that day.  They are decked out in Thai flags and the yellow flag featuring the royal crest of King Rama IX. 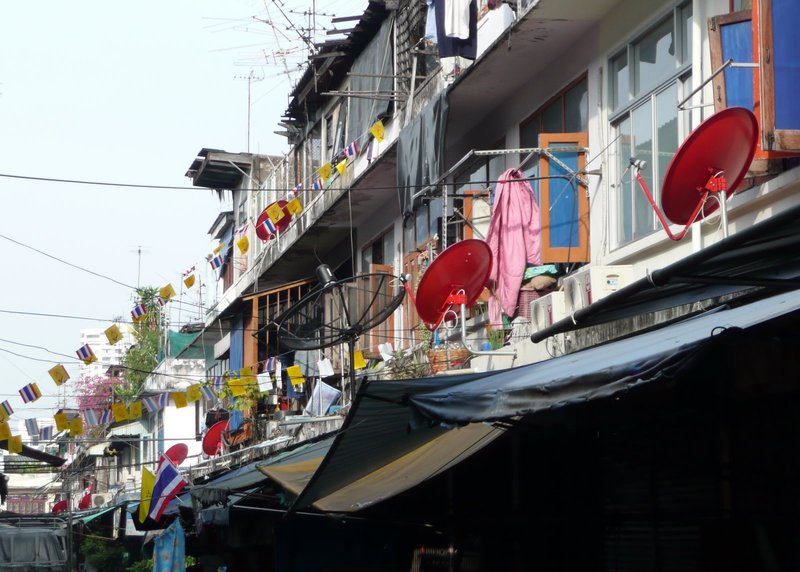 Not far away, in the Chula neighborhood located back behind National Stadium, are these narrow soi which shop houses lining them.  I found the line of this roof fascinating with so many repeating shapes and textures and colors. 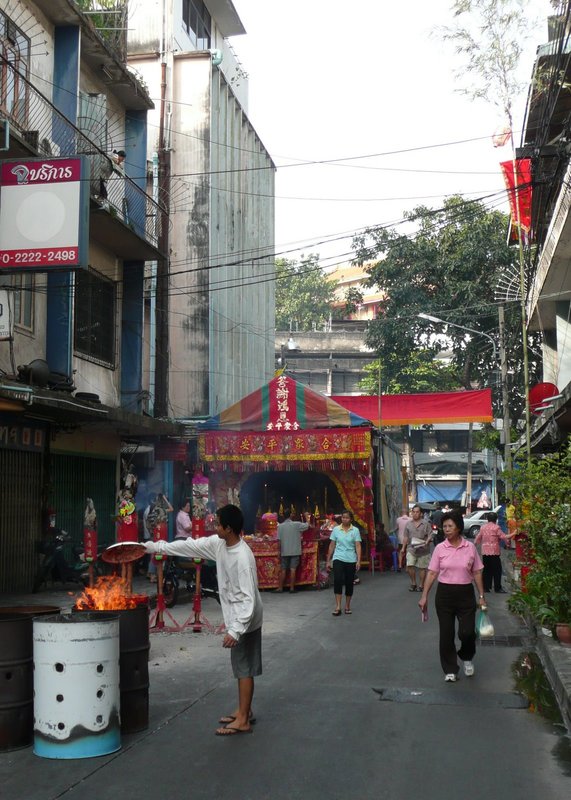 Another neighborhood near the train station, just on the edge of Yaworat, Chinatown, is clearly a Chinese community.  This single block was in the midst of some festival with locals making merit and offering gifts to the gods.  Evidence that the Chinese, while very integrated into Thai society as a whole, still maintain some distinct cultural practices.  Very vibrant area and fun to ride through. 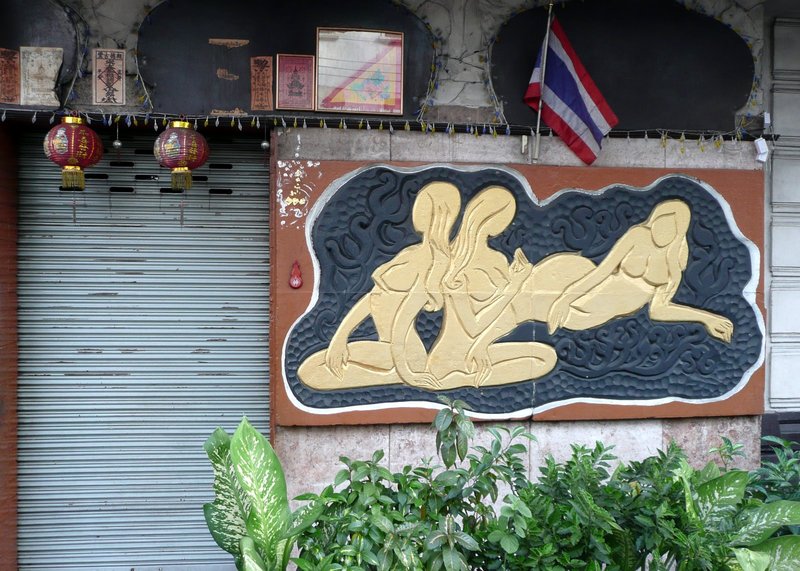 Also near the train station is the entryway to a “Turkish bath,” as these dens of illicit pleasures are sometimes euphemistically called.  This is actually on a pretty main thoroughfare and each time I drive by this wood carving catches my eye.  I think it is tremendously kitschy, something out of the 1970s in a Trader Vic’s sort of way.

0 thoughts on “Riding Around”