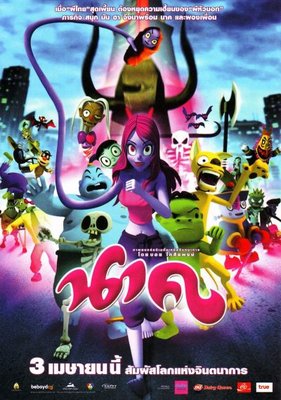 Thais love ghost stories.  It is a popular genre for films, TV shows, and comic books.  There was even an animated family film that came out last year in which the popular ghosts were the good guys, taking on a bunch of evil spirits intent on taking over the human world.  Here’s the poster for that (right).

If you polls,  in excess of ninety percent of Thais will tell you they believe in ghosts and spirits.  And by “believe”, I don’t mean casual belief.  I mean, dead serious I-can-tell-you-my-own-first-hand-experience-with-a-ghost belief.  Whether you share their beliefs or not, Thai ghost-lore is an interesting lens through which to view the culture.

This ad for Sylvania lightbulbs plays off the ghost theme, with the premise that things aren’t as scary in the light.  Thai advertising is often very clever and Thai ad design firms win lots of awards internationally.  This ad won the Silver Lotus Award at Adfest 2009 – the Asia Pacific Advertising Festival.  You’ll probably want to watch it once (it’s only 47 seconds) then read my explanation below and then watch it one more time.

In the video you see the following ghosts:

Kra-Sui – This female apparition often wanders around at night in a white gown, but she is just a detached head and internal organs, usually with a brightly beating heart (which you see in the last two seconds of the ad after the lights are switched off).  She is a particularly troublesome type of ghost and insatiably hungry.  In the old days, bathrooms were detached latrines often located some distance from the house out near the rice paddies.  The Kra-Sui, which eats excrement, was said to hang around these outhouses.  Certainly, more than one young child was afraid to go to the toilet in the middle of the night out of fear of the Kra-Sui.

Kra Hung – This ghost appears, usually as a woman, with feathers and a tail like a bird.  Kind of similar to a vampire, I understand that Kra Hung eats internal organs.

Banana Ghost – Again in the old days, rural houses often had a small area of banana trees growing near the house.  When children would want to go out and play after dinner, they would be warned away from the banana grove by tales of the banana ghost, a nymph-like spirit that would haunt the trees.

Jackfruit Ghost – The English translation is incorrect here, although it attempts to convey the cultural message of the jackfruit ghost.  When the boy asks, “Is that a jackfruit ghost?” the father actually answers, “No – a person.”  The lost joke is that in the old days, prostitutes used to ply their wares in the trees along roads and parks, trees that often included jackfruit trees.  When children would point out one of the ladies of the night and ask who she was, the answer from the unable-to-explain-prostitution parent would be, “That’s a ghost.”

Blue Ghost – The blue ghost is normally a woman, not a man, and isn’t blue in a “Blue Man Group” sort of way.  Instead, it is just the name for another type of beautiful but frightening female ghost who dines on human flesh.  Tracing how these ghost tales came about, it isn’t surprising that attractive, unmarried village women of a certain age might have been whispered to be blue ghosts or Kra-Sui.

Tall Ghost – To return after death as this ghost, as tall as a palm tree, gaunt in appearance and with a mouth only as large as a needle’s point, was the punishment for children who spoke ill of or abused their parents.  Roaming the countryside the tall ghost would plead in a sorrowful voice that sounds like the wind blowing through the trees, for people to make merit for them so they could be released from their sins. 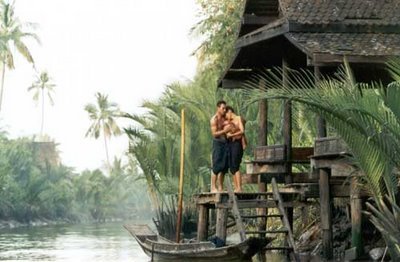 The most famous Thai ghost, one not featured in this ad, is Nang Nak.  Set in ancient Siam, Nang Nak is the young wife of a handsome villager who goes off with the army to battle the Burmese.  She dies during childbirth but, longing for her husband to return, she and her infant’s spirit continue to inhabit their home.

When her husband Mak returns, he is initially unable to tell that anything is amiss, although to all the villagers the decay of the house is evident.  The villagers try to warn Mak but Nang Nak takes her revenge on them.

Eventually, Mak discovers that his wife is a ghost – she drops something through the floorboards when preparing dinner and reflexively reaches for it, her arm stretching supernaturally to retrieve the item from the ground below the house.  With the help of the village monks, Nang Nak’s spirit is eventually released so she can go to the next life.

The story of Nang Nak has been made into countless movies (including one that got some overseas play by director Nonzee Nimitbutr, a still from which is pictured above), an opera (which we watched about five years ago), and there were recently two different musicals based on the story playing simultaneously here in Krungthep.

Want to know even more about Thai ghosts?  Check out this interesting entry (which I found after writing my own entry!) on the Paknam Web forum.

0 thoughts on “Learning About Thai Ghosts”