You’ve seen them, those tattoos that people sport featuring words or characters in a language other than one in which they are fluent.  You may even have one yourself.  I’m telling you, though, that’s a mighty dangerous path to tread.

Leaving aside questions of cultural appropriation and exoticization (and there is some potentially rich academic soil to till about this issue), what I’m talking about is the plain and simple, practical reason to not get a tattoo in a language you don’t read: It may end up being incorrect.

Now, I know someone to whom this happened.  Because of that, I realize that bright, intelligent, thoughtful people can make that mistake.  And because I know that readers of this blog are equally bright, intelligent and thoughtful, I’m providing you this warning: Don’t get a tattoo in a language you don’t read! 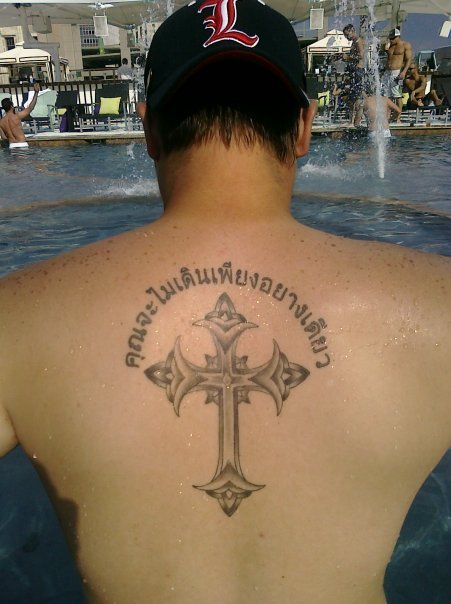 My friend Jack is a Thai who lives in the American midwest.  Note that this is not a picture of Jack’s back.  While he was on holiday, Jack spotted a young caucasian man with this tattoo and curious, asked him about it.

It seems that the young man, a native of Springfield, Missouri, was a basketball player and he went on some program to Thailand where he played ball with Thai high schoolers and spoke to them about basketball and life in the U.S.  Returning to Springfield, the young man decided to get a tattoo, using Thai script.

So far, so good.  Glad to hear that Thailand made such a positive impression on him that he wanted to immortalize the Thai language on his skin.

The problem is two-fold:

First, there are two spelling mistakes.  The words ไม and อยาง are both missing accent marks  They should be ไม่ and อย่าง.  As a tonal language, the use (or absence) of a tone mark can often alter the meaning of Thai words.  In this case, the misspelling does not change the meaning but simply makes the words incorrectly spelled.

Second, the phrase doesn’t say what he intends it to say.  Based on the cross, I guessed he wanted the Christian phrase, “You will never walk alone.”  When I asked Jack, he confirmed that this was the young man’s understanding of how the tattoo read.  Jack, being Thai and characteristically too polite to embarrass someone, didn’t tell him that the tattoo says something else entirely.

The phrase reads khun ja mai duhn piang yang diaw, which means “You will never just only walk” – in other words, you will walk while doing something else at the same time, perhaps chewing gum or humming or whistling.

No word on how the young man managed to get this incorrect translation.  My guess is he thought it would be cool and asked someone he met in Thailand – someone who doesn’t understand English well enough – to write the phrase in Thai.  Given what I’ve learned while living here, I can see how “alone” could have easily been misunderstood as “only just”.

So let this be fair warning to you, your friends or family members.  If you or someone you love is planning on getting a tattoo, stick with a language you can read so you are 100% certain that the tattoo says what you think it says.

0 thoughts on “Tattoos in Native Tongues”