In this age of internet relationships and Facebook “friends”, one could be forgiven for questioning how genuine these virtual connections are. While many may indeed be tenuous, several connections I’ve made through this blog have developed into real, meaningful friendships with people from so many different walks of life.

It was because of one such relationship that I carved two days from my visit to the United States to fly to Quincy, Illinois (population 40,000). Lying on the eastern bank of the Mississippi River some 140 miles north of St. Louis, Quincy has been the home for the past 31 years to Dr. Zakiah Ali, her husband Mohamed, and their family.

Visiting Zakiah after getting to know her through her postings, poems and comments on Xanga was a blessing. She and her family are every bit as kind and welcoming as you could imagine. While my twenty hours there were too few, I’m glad I had the opportunity and look forward to a return visit.

Connecting in St. Louis from Kansas City, I boarded a 19-seat puddle jumper operated by Great Lakes Airways, who has the government’s Essential Air Services contract for Quincy. This Thursday afternoon I was the only passenger. 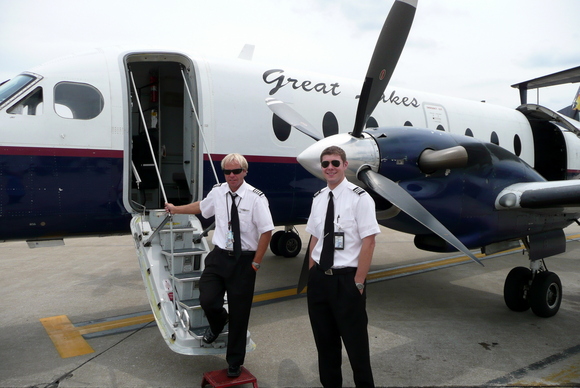 After a 35-minute flight, most of it spent climbing and descending, I arrived at Baldwin Field. Waiting in the tiny terminal were Zakiah and Mohamed.

A few minutes later we arrived at their lovely home, the famous red Mustang convertible sitting in the open garage and the beautiful roses blooming in the front yard. 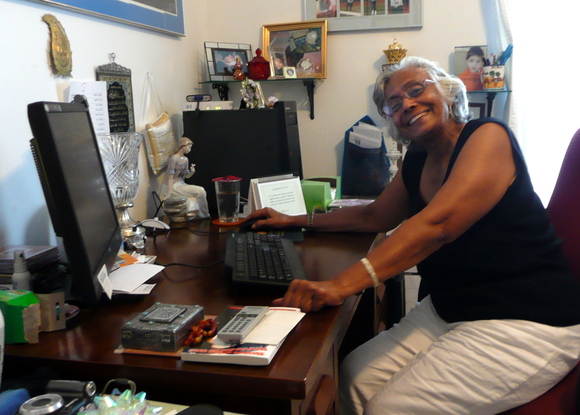 Above, the place where all of Zakiah’s posts and poetry enter the ether.

No sooner had I arrived then the food began. Zakiah’s gracious hospitality manifests itself in many ways, not the least of which is through the preparation of copious amounts of food. 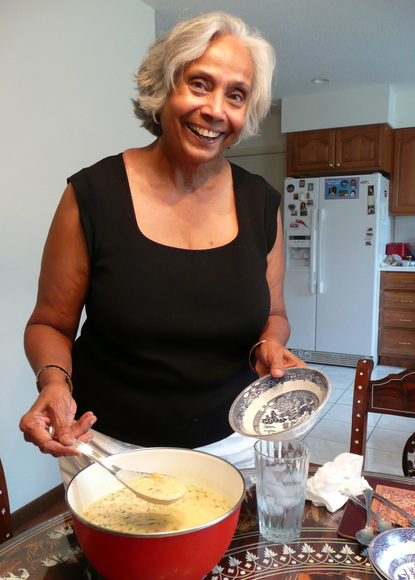 In addition to some salad and quiche, Zakiah served mango feerni, a soup-like dessert made with homemade condensed milk, pureed mango and pistachios. It was delicate, cool and refreshing. 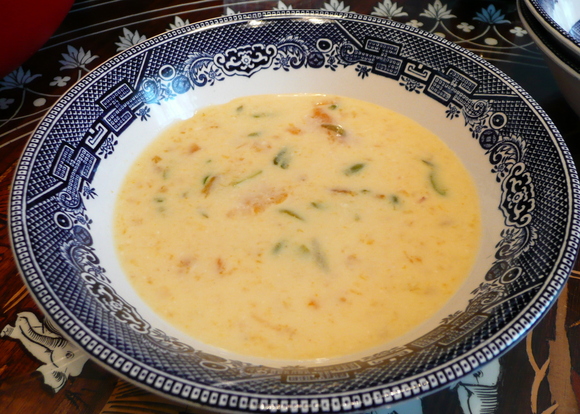 After resting and freshening up, Zakiah and I hopped in her Benz for the nickel tour of Quincy. It is a beautiful town, renowned for its architecture. There were dozens of beautiful houses in many styles – colonial, Victorian, craftsman, etc. – on the shady, tree-lined streets of the old city. 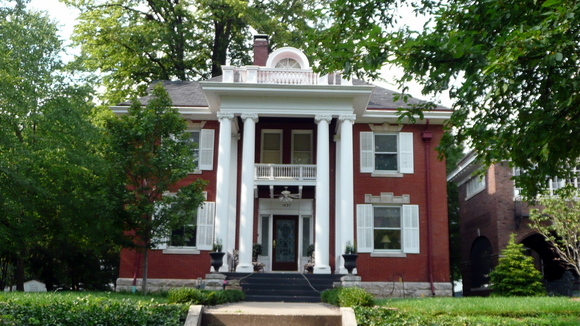 We drove past several notable sites including Washington Park, the setting of one of the seven debates in the 1858 Senate race between incumbent Stephen A. Douglas and a lanky lawyer named Abraham Lincoln.

Some of the other sites – Quincy’s mosque, which Zakiah founded many years ago, for example – she pointed out when we were half a block beyond them. Perhaps the driver was so careful about her safe driving that the “audio” on the tour was delayed. We also made our way to the banks of the mighty Mississippi, the wide river that has so profoundly shaped Quincy.

Returning home, Zakiah began preparations for an elaborate dinner. I helped a bit but mostly took pictures and notes and filmed the proceedings. After I return to Thailand, I’ll see what I can do about editing the video clips. 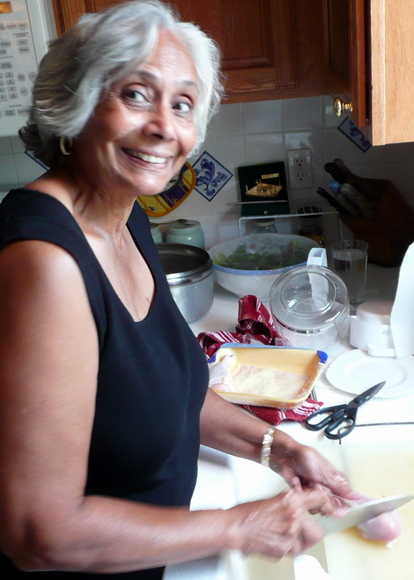 While dinner was being prepared, Zakiah and Mohamed’s daughter stopped by with her husband and two sons. If you’ve read Zakiah’s blog, you know she adores her grandsons, Davis and Noah. Davis is cute but very shy and Noah has inherited his grandparents’ cleverness. They are a beautiful family. 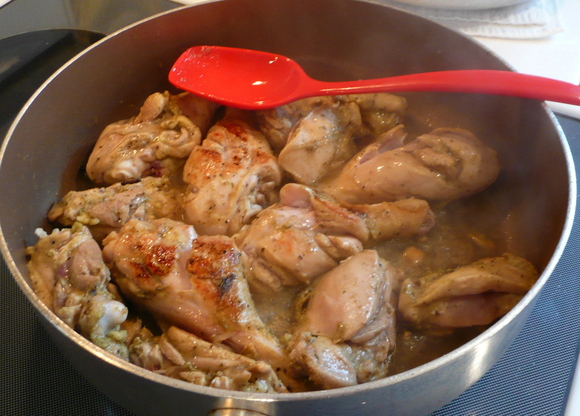 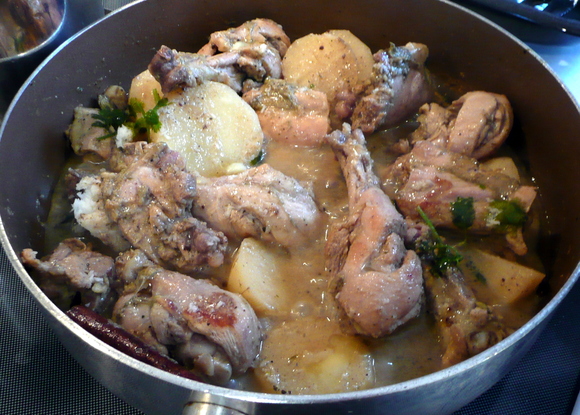 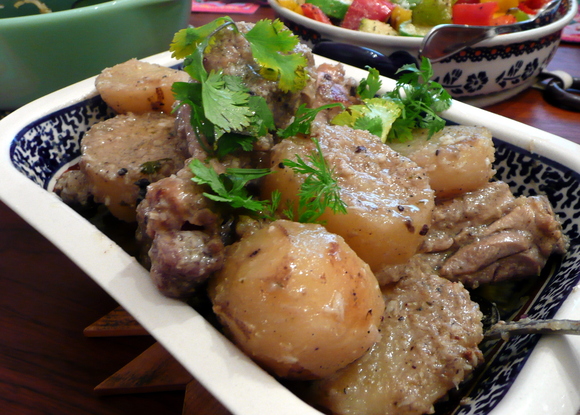 Beef Briyani, a dish with basmati rice and stewed beef; 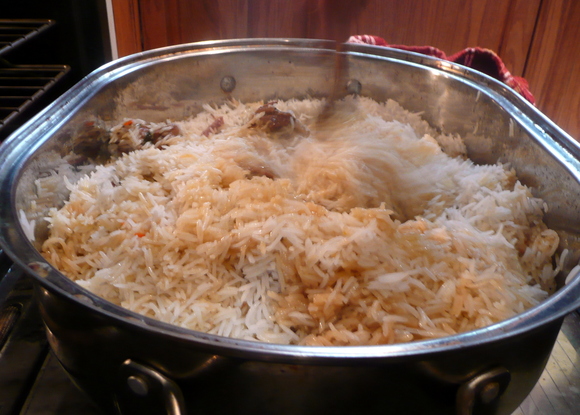 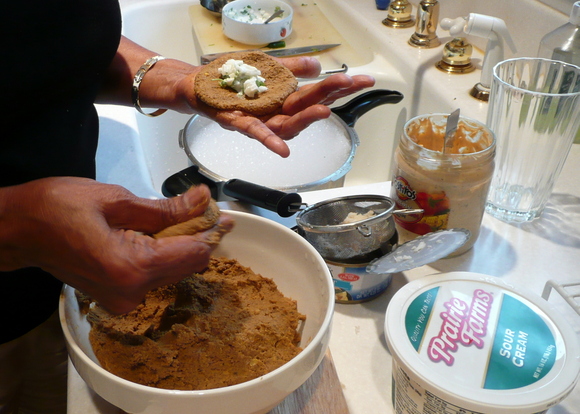 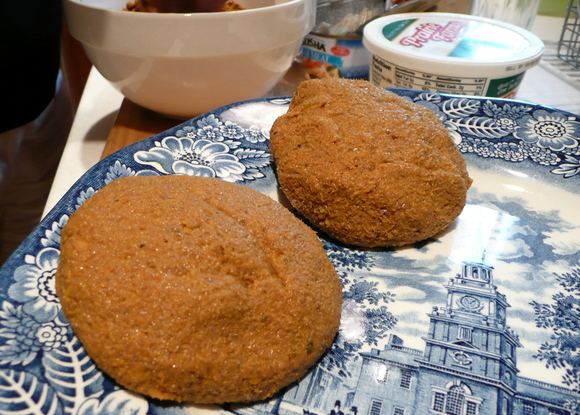 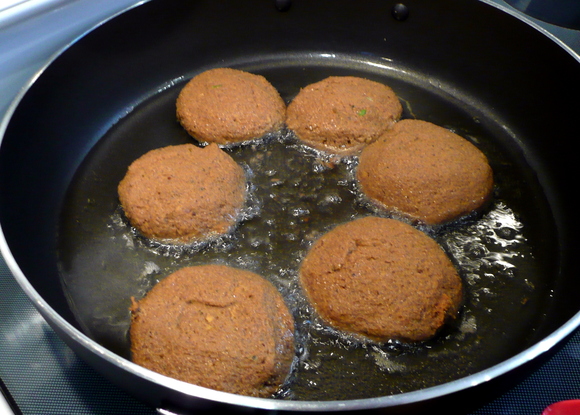 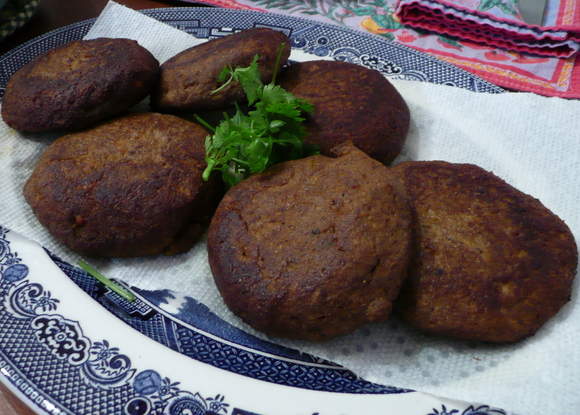 and a dish of broiled vegetables tossed in Italian dressing and parmesan cheese, our only exception to the otherwise Indian cuisine. Dessert was faluda, an eggless custard like the Italian panna cotta. Made with milk and a seaweed that thickens the dish like gelatin does. The milk is simmered with sugar, almonds and rose water then chilled.It is refreshing and the perfect end to an excellent meal. 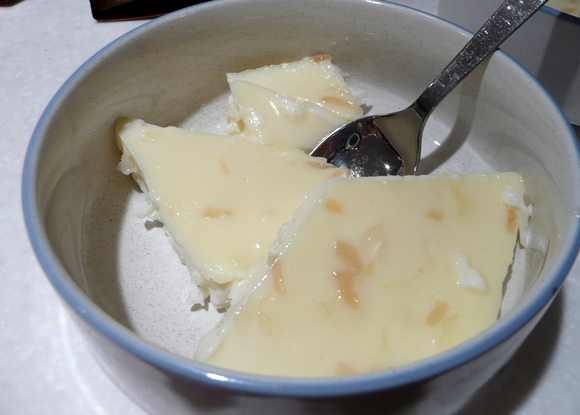 We talked into the evening, covering so many topics. I was especially interested in hearing about the experiences Zakiah and Mohamed had, moving halfway around the world and starting a new life in a strange land and, even more challenging, in a small town where they appeared so different from everyone else. Hearing the stories of the challenges of their first few years, and how they were eventually embraced by the community (Dr. Zakiah received the key to the city after her retirement) and now consider it home, I am inspired at their ability to gracefully triumph against such odds. Truly amazing.

Below, the picture of the town’s well-known doctor in an interview with her in the local paper’s “Women In the News” column. 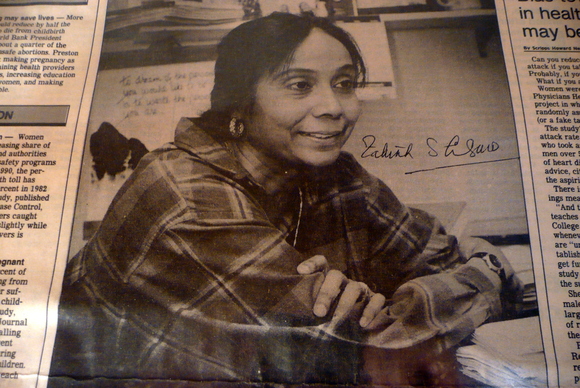 Their living room, attached to the dining room, has particularly interesting decorations. Everything in it has an intriguing story or history attached. There is the commendation given to her great grandfather by Queen Victoria for his service to the crown. There are the paintings done by an uncle who was a notable artist. There are furniture items from her childhood home in India.  So many things, each with deep meaning and significance. The stories from the living room alone were worth the visit. 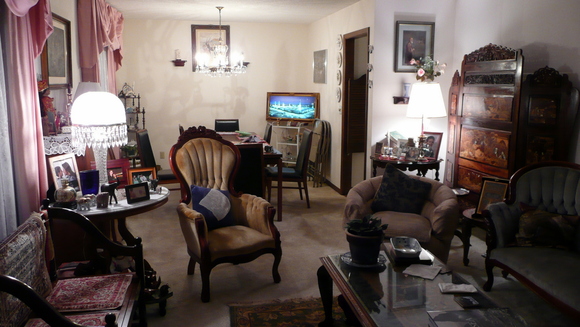 Friday morning we enjoyed a lingering and elaborate breakfast (she even bought two kinds of ground coffee from the store – they aren’t regular coffee drinkers – to make sure I would have my morning coffee) on the backyard deck. 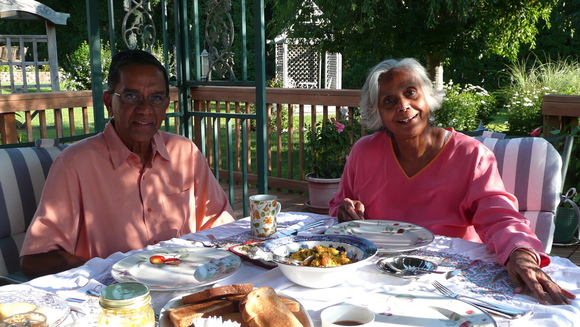 Above: Mohamed and Zakiah.  Below, Eggs Dr. Ali Style, with tumeric, onion, tomatoes, and chillies.

The morning was unseasonably cool and we enjoyed the view of her koi pond and beautiful garden. A gazebo, several rose bushes, other flowers, and a hedgerow sat behind the pond and the surrounding cluster of trees. 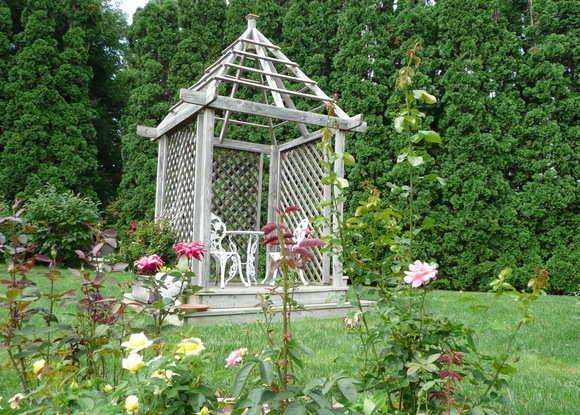 As she fed the fish, which truly do come at the sound of her voice, she mused how she wishes she could show the garden to Matt, whom she thinks would especially appreciate it. 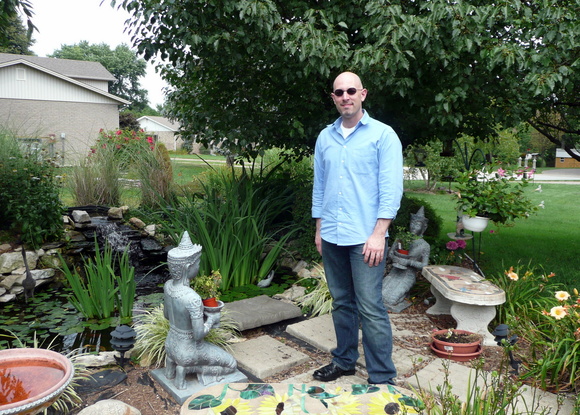 At 9:30 I called the airline to make sure the flight was running – after the solo trip the previous afternoon I was worried they might not come back for me – and we headed to the airport shortly afterwards. The terminal is so cute, with one tiny check-in counter, security guards who show up for the three flights a day then go home, and one rental car sitting in the Hertz lot. This time our flight was packed – four passengers! Checked in, I said my farewells and headed through the security screening and across the tarmac to the plane.

As the plane climbed about the endless rolling green farmland that surrounds Quincy, I thought about my visit and confirmed that it had indeed been well worth the time and effort to make this virtual friendship into an in-person one.

0 thoughts on “A Trip to Quincy – Full Version”