Saturday evening in Los Angeles, I met up with Curry, his brother Eric and William for dinner at Hideo “Shiro” Yamashiro’s Orris, a five-year old “small plates” restaurant that borrows heavily from the Japanese izakaya, or eating pub, tradition.  A fusion of Japanese and French cuisines, Shiro’s emphasis is on the ingredients with unfussy presentations that highlight the clean flavors of the food.

It was a table full of foodies and we met several of the qualifications of the list of ten things you should know about food bloggers, so much so that an older diner who had been sitting inside the plate glass window and had noticed our photographing, stopped by as he left the restaurant to enquire about it. 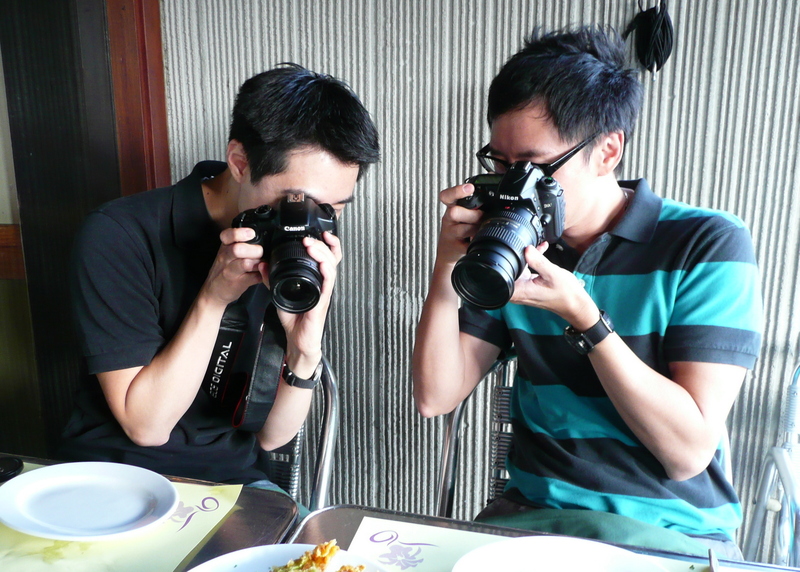 William and Curry snap away.  What you don’t see is Eric, to my left, taking pictures with his iPhone.

Let’s take a look at the small plates that we enjoyed over our leisurely two hour dining experience: 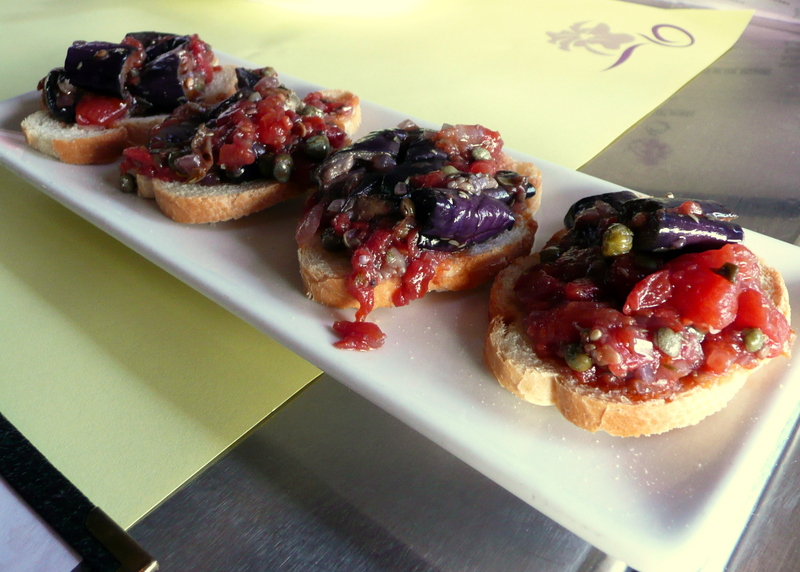 An amuse-bouche of ratatouille with fresh eggplants, tomatoes and capers.  Lovely, bright flavors like summer piled on top of a slice of baguette. 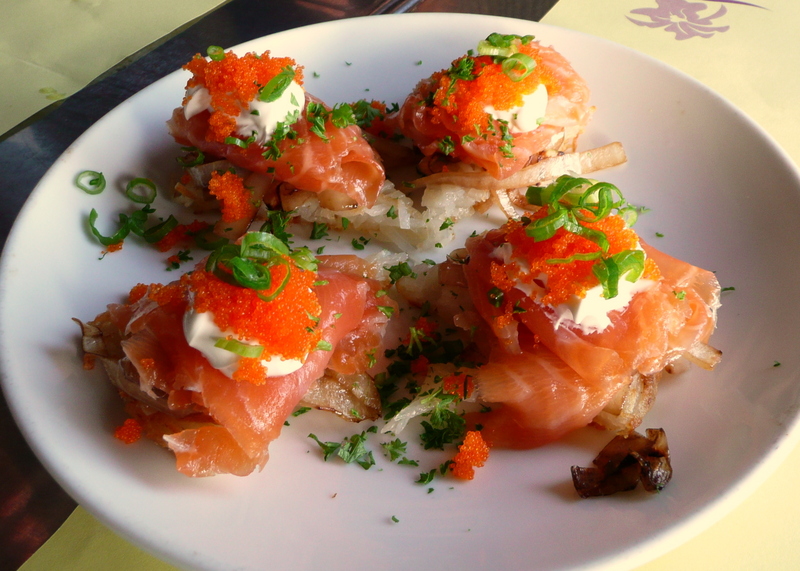 An off-the-menu special, freshly smoked salmon on top of potato pancakes served with creme fraiche and tobiko – flying fish roe.  This was also very nice and I’m tempted to try this one at home. 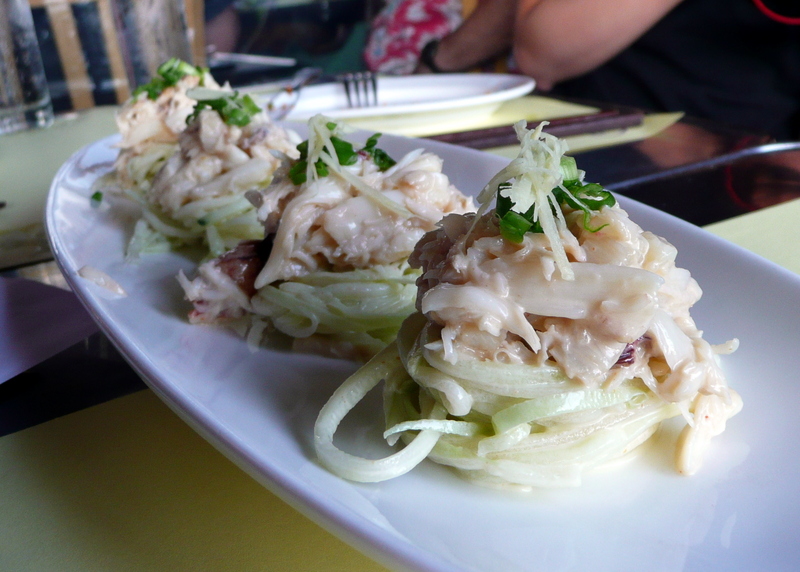 Dungeness crab salad “nests” – Freshly handpicked dungeness crab served on top of julienned cucumber in a light ginger dressing.  This was tasty although other than a few slices of ginger, I couldn’t identify any “dressing” – something the cucumber could have benefitted from. 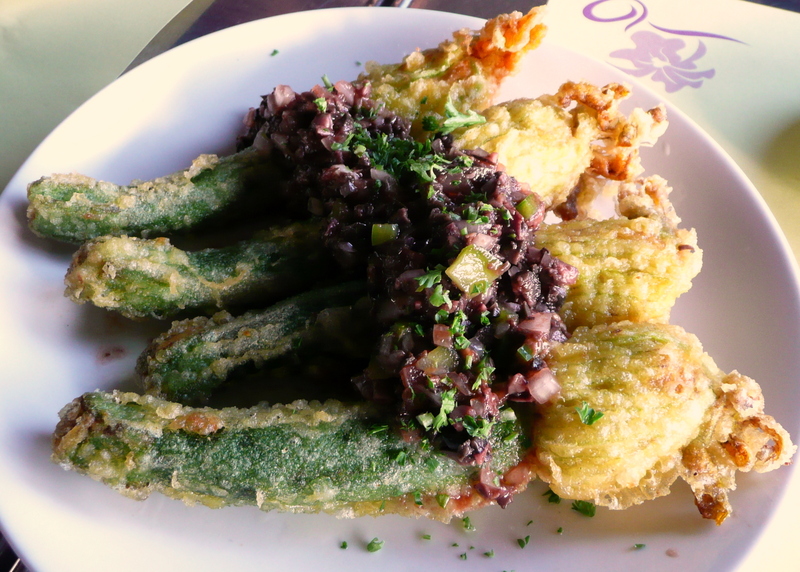 Squash blossoms stuffed with shrimp mousse and pistachios, lightly friend tempura-style and topped with a calmatta olive salsa.  Very nice.  These zucchini were beautifully tender and the salsa gave it the right zestiness. 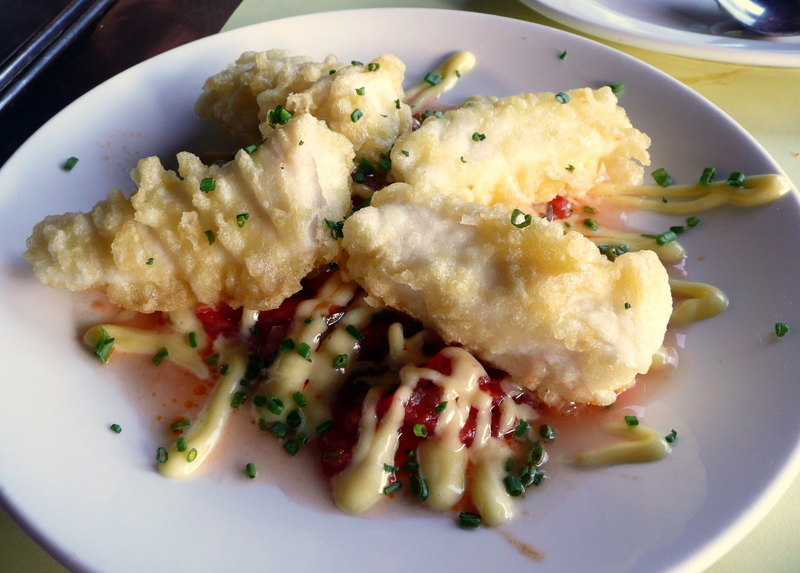 Another off-the-menu special: halibut tempura on a tomato tarragon puree with garlic aioli.  The halibut was very light, not at all oily, but also with such a delicate flavor that it got lost in the puree. 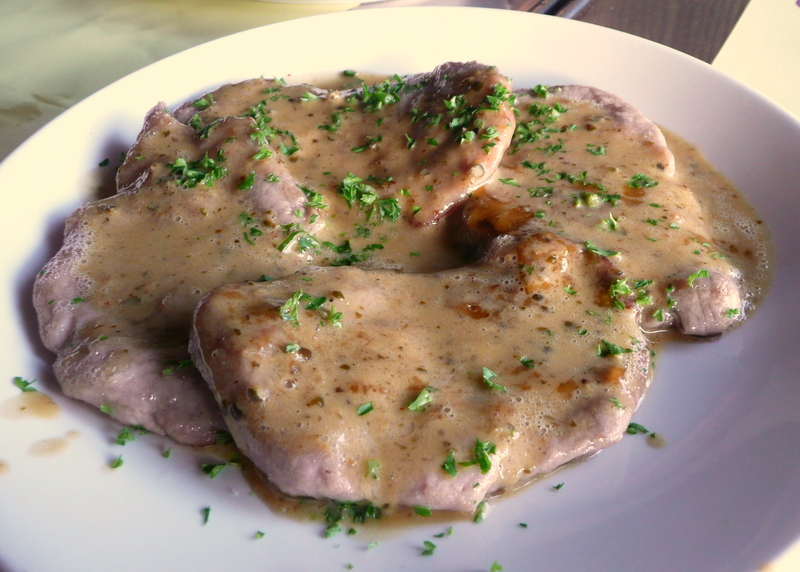 Tender Berkshire pork loin medallions sauteed in a zesty green peppercorn sauce.  The pork was exceptionally tender and the sauce was very rich.  This was a satisfyingly meaty dish. 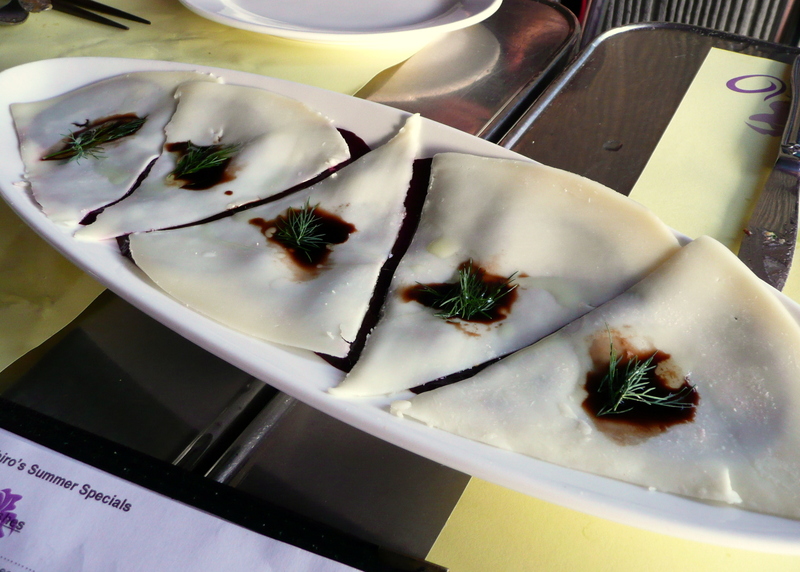 We concluded with slices of roasted beets topped with Etorki Basque sheep cheese and finished with a drizzle of balsamic vinegar and olive oil with a sprig of dill.  Shown in detail below. 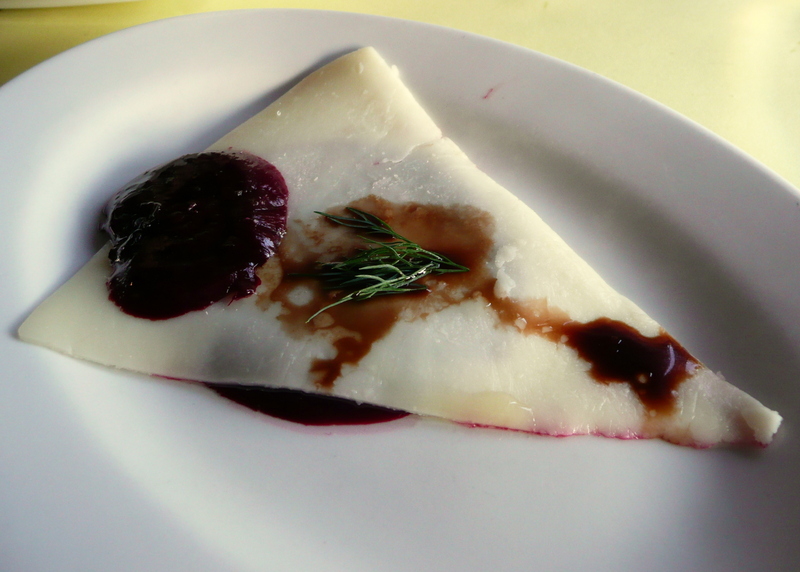 The presentation (which I ruined by putting a slice of beet on top) was clever and visually pleasing.  The flavor was perfectly balanced: the beets were sweet and earthy, which complemented the earthy richness of the cheese, which was cut by the balsamic vinegar.  The dill provided an aromatic contrast that was very nice.  This was my favorite dish.

The restaurant was a good value, with the bill not breaking $100 for four diners even with two of us enjoying glasses of wine.  The food is creative, superbly high quality and intellectually engaging.  Worth a return visit.

Chris, William, Curry and Eric in front of Orris.

The one drawback of the restaurant was the limited and not very inspiring dessert menu.  Since it was still early and a pleasant summer evening, we decided to stroll down Sawtelle Boulevard to the local Pinkberry.

The Sawtelle district, which was an independent city until its residents voted to merge with Los Angeles in 1922, has an extensive Japantown, a suburban neighbor known informally as “Little Osaka”, as compared to Little Tokyo, which centers on Second and San Pedro Streets in downtown Los Angeles. 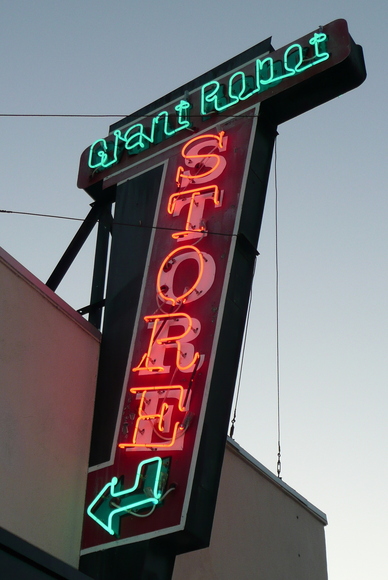 Among the many shops on this street are two branches of Giant Robot, the Asian American pop culture store (and magazine) that also has locations in SF and NY.  In addition to GR there are plenty of nurseries, karaoke parlors and frozen yogurt shops.

We went to Pinkberry, an upscale frozen yogurt chain owned by Korean Americans that is a copycat of South Korean chain Red Mango, which has recently made inroads into the US market itself.  While I had heard much about the Pinkberry mania, I had never tried it myself. 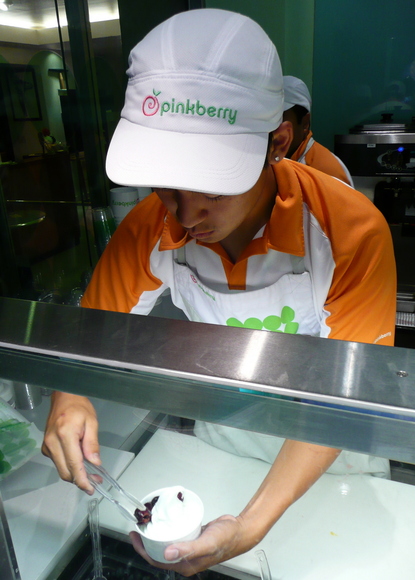 The deal is similar to the frozen yogurt shops of the 1980s but perhaps a little higher quality.  The yogurt actually is tart, like yogurt really is, and the choice of toppings is slightly more eclectic. 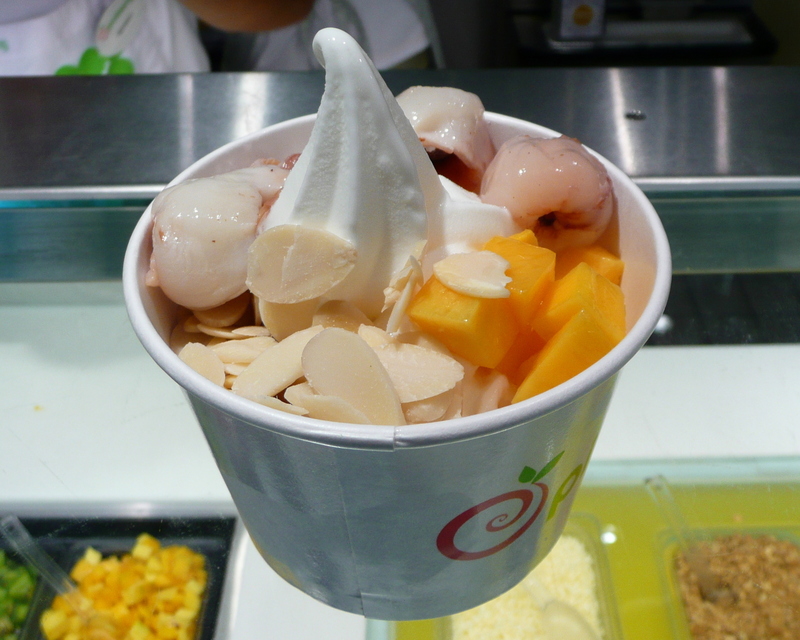 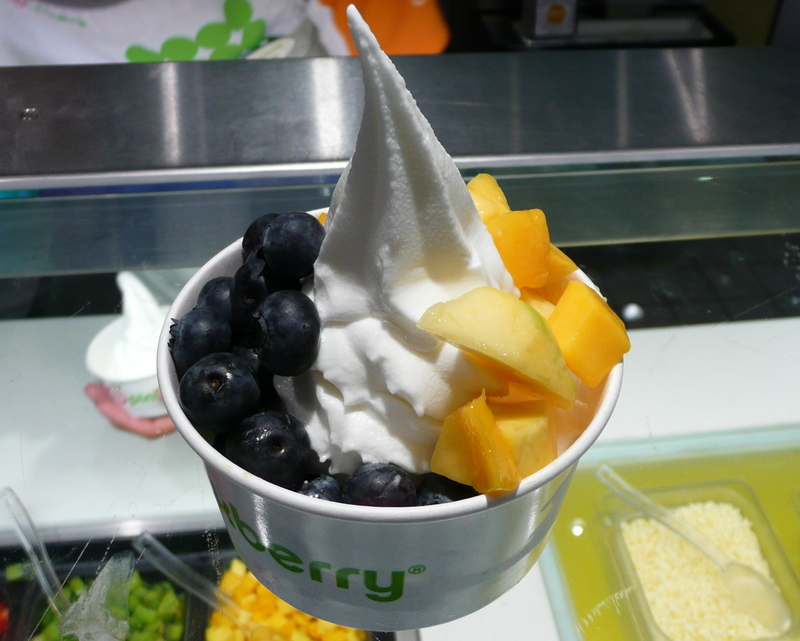 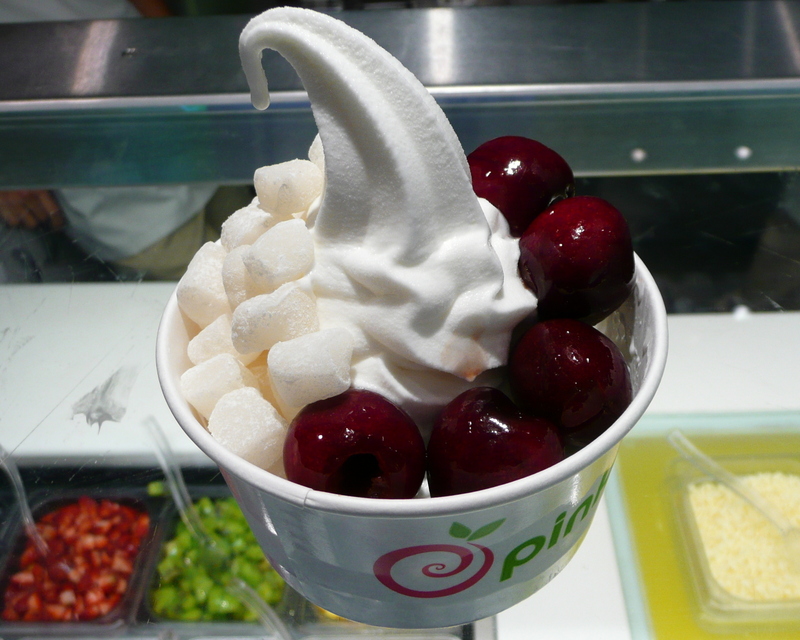 Original with mochi and fresh Bing cherries – my choice.  Curry opted for a granola parfait that did not photograph well.

As luck would have it, the West LA Buddhist Temple was sponsoring the annual Obon festival, a sort of “day of the dead” ceremony that is full of dancing and celebrating.  Large processions of dancers, many glad in kimonos, parade around the streets to traditional music. 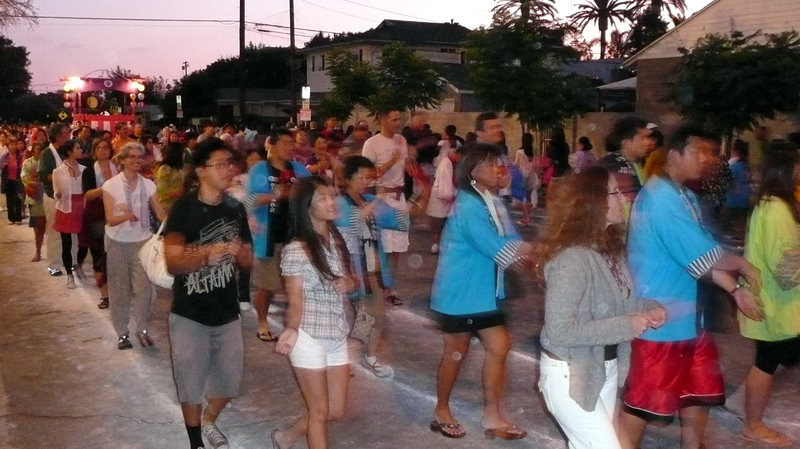 As the pleasant ocean breeze blew in from the Pacific, we enjoyed watching the crowds and taking in the sights.

Before calling it an evening, I heard someone calling my name.  At first, I ignored it, since my name is common and the only people who would know me were standing right next to me.  But when it was called again, I turned around to see a young lady whom I did not recognize.

Instead of pretending to know and hoping she would say something that would trigger my memory, I acknowledged that I didn’t know her name.  Wouldn’t you know, it was another Xangan!  What are the chances of that?  “I thought you had left LA already,” she said.

Actually, this is the second time someone has randomly recognized me on the street because of my blog.  The first time was about three years ago in the elevator at my previous apartment in Bangkok.

With the recognition of how small the world really is, we called it a night.  I let the boys head home and returned to Bill and Alex’s to do my packing.