Matt and Si invited us over to their place for game night on Saturday, but I asked if we could instead have it at our place instead and invite a few more people.  Since Tawn and I are heading out for the US soon (me for 26 days, him for 16) we wanted a chance to see several of our friends before we left.  So it came to be that we had our largest party yet. 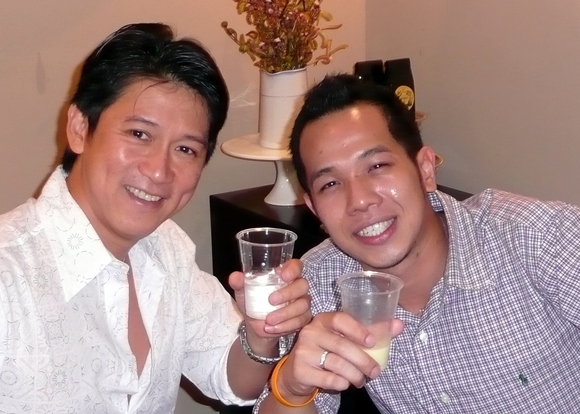 A tale of two Chais.  Chai is a popular Thai nickname, so here we have Suchai and Chairat, commiserating about their respective boyfriends over a glass of something strong.

While it turned out very well and there was plenty to eat and drink and everyone had a good time, it was probably a good lesson for me and Tawn.  Sixteen guests is a bit overwhelming in our small house.  Quick, break down the wall between units so we can spread our the party! 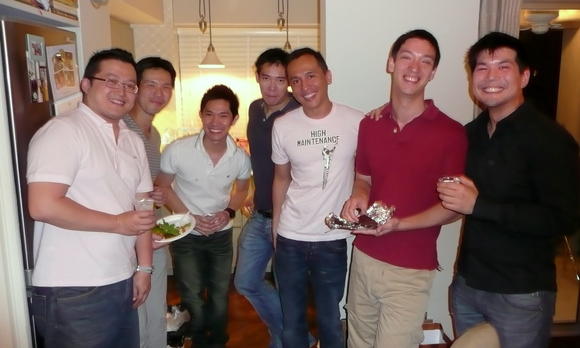 It was a fun time, though.  I ordered pizzas and made a huge green salad.  All the guests brought additional food to eat, so we had a tremendous amount of food left over.  Thankfully, people helped us by bringing food home, otherwise we would never have been able to eat it all before leaving the country.  As it is, I’ll be eating salad three times a day until Wednesday! 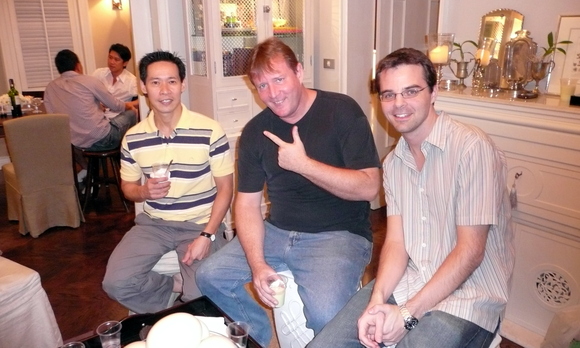 Francois, Ken and Russ wait for the games to begin.

The bar was open and thanks to our guests we had just about every type of drink you could want.  Ken mixed something for us that was very nice.  I don’t recall the name but it is one part of rum, one part of midori, one part of coconut milk and four parts of pineapple juice.  Sweet and vagely Thai, it was a little too easy to drink, if you know what I mean. 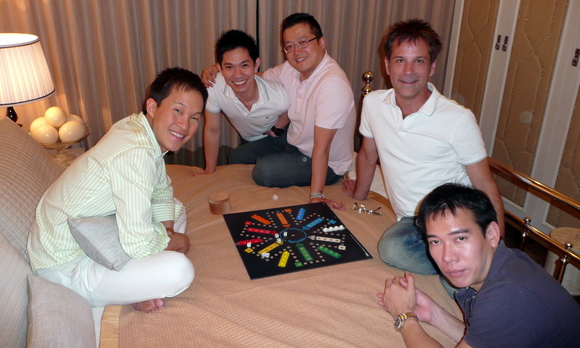 Tawn, Geng, Brian, Si and Matt get down to some serious Aggravation.

After the eating, we got down to the game playing.  The dining room had Monopoly (Did you know the new version of the game no longer has cash?  Each player now has a debit card!), the living room had Uno and Pit, and we set up a game of Aggravation in the bedroom.  Tawn was a bit concerned as Thais will generally not hang out in someone’s bedroom, let alone sit on their bed.  Not polite.  But in this case, our guests, perhaps lulled into relaxation by Ken’s bartending, plopped down for a few games.

Things wrapped up a bit late – the last guests left about 1:30! – and poor Tawn was quite tired, sleeping in the next morning.  But it was a fun way to celebrate before our departure, see everyone, and introduce some groups of friends who had not previously met.