Somewhere along the way of moving to Thailand, my trusty cast iron skillet turned rusty.  That is a shame, because I really like cooking with it.  However, I adapted to not having it in my repertoire of pots and pans.  Recently, though, I’ve been thinking that there’s no point in letting it return to the elements.  With my induction stove, I really should be using quality pans like this one. 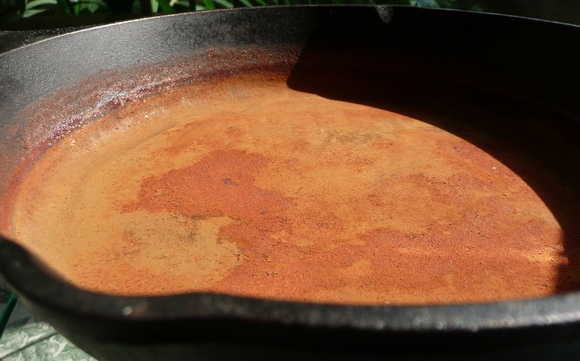 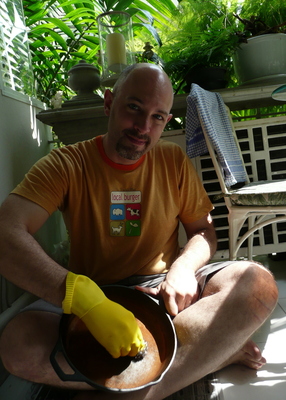 This weekend, after reading up about cast iron restoration methods on the internet, I set aside some time Saturday morning to rescue my pan from oxidation oblivion.

The process proved surprisingly simple.  Had I known how simple it was, I wouldn’t have waited so long.

I started with the metal scouring pad and scoured the surface of the pan to remove most of the rust particles.  This only took a few minutes and would have been even easier if I had also used some sandpaper.

After wiping the particles into the trash, I heated the pan for a few minutes with two tablespoons of vegetable oil.  I then added enough coarse salt to make a paste, scouring with the metal pad to remove more of the rust and to scour down to a smooth surface. 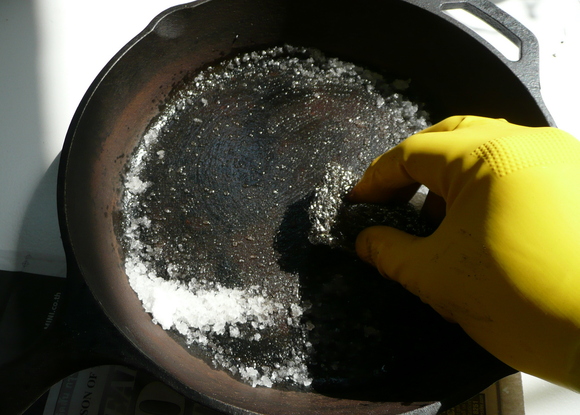 Next step was to wipe the pan with paper towels until the towels no longer stained brown.  This took a lot of paper towels, but eventually they came out clean.  I did one last wipe with a damp paper towel to make sure no salt residue was in the pan, then popped it into the oven for just a few minutes.

Below: Tawn captures the look of extreme concentration on my face while I scour. 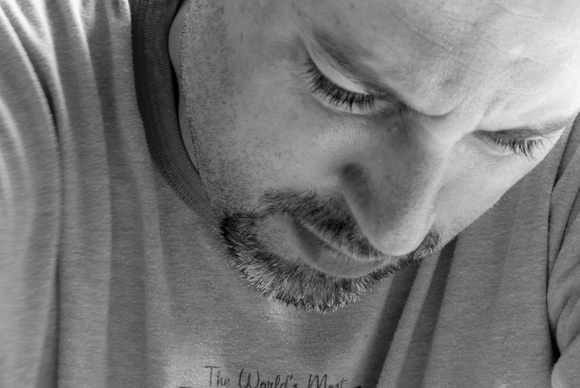 After a few minutes drying in the oven, I added another tablespoon of oil and, using paper towels, spread it in a thin, even film all over the surface and sides of the pan. 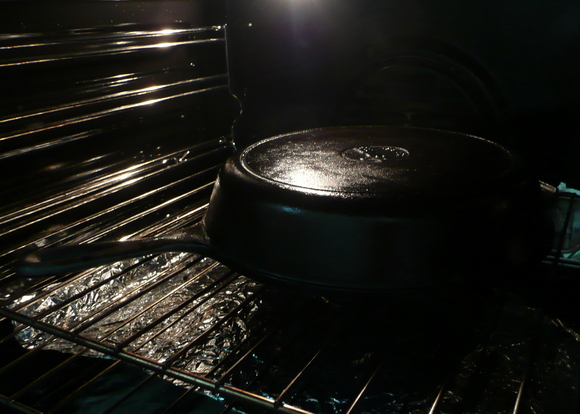 I then returned the pan to the oven (at about 300 F) upside down and let it bake for an hour, until the oil “set” on the pan.  From here on out, it is no soapy water to clean this pan.  Wipe it out with paper towels, use a little salt if scouring is needed, and then apply another thin film of oil.  Over time, it will become a strongly seasoned pan that should be nearly as nonstick as anything at the store.

How’s that for a handy weekend?