Most Sunday mornings I go out for a ride.  There are exceptions – especially during rainy season – but I really enjoy the opportunity to explore other areas of the city and, when possible, leave the concrete jungle altogether in search of the real one.

Sometimes I’m joined by someone else.  Markus and I used to ride regularly.  Then his travel schedule for work got busy.  Then he and Tam packed up and moved to Germany.  Since then, Stuart and I have ridden several times.  Sadly he and Piyawat are packing up for Phuket.  My biking partners keep leaving!  Maybe I’m pushing them too hard?

In any case, one thing that strikes me when I get outside the main part of the city is how much wildlife there is.  Not just the mangy soi dogs that nip at my heels (I’m thinking I should buy some pepper spray) and not just the cows, water buffalo, horses and pigs I see in some of the small family farms.  I’m talking real wildlife, especially birds.  This could be an Audobon Member’s paradise. 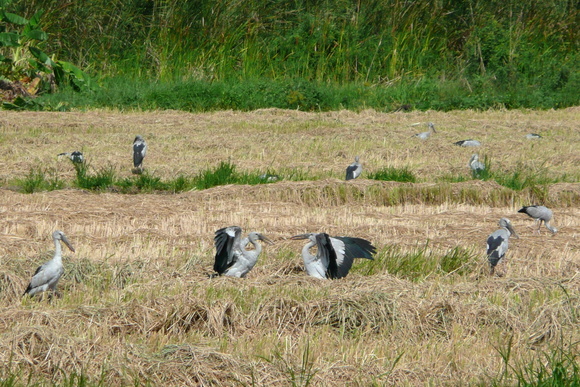 Above, some males have a little squabble. 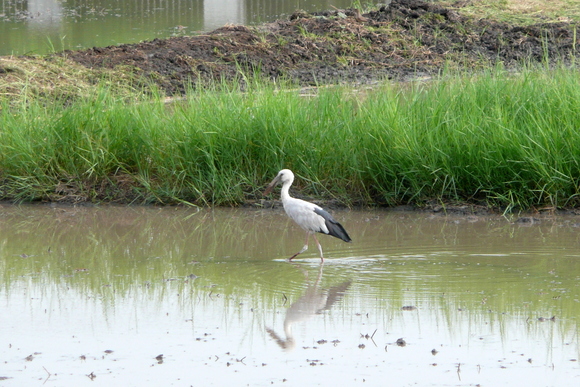 It is pretty difficult, even with a 10x optical zoom, to get very close.  The birds notice when I stop at the road sdie and shyly move away.

As I think I’ve mentioned before, there is a 4-km stretch of road out near the airport that is popular with cyclists.  It was built as part of a very ambitious plan to connect the eastern suburbs with the city.  It is three lanes in each direction with wide shoulders.  The problem is, it just peters out and never actually goes anywhere.

So the road is closed to all except local traffic and since it is an agricultural area still, there isn’t much of that.  This makes it the perfect place to ride.

Well, last Sunday I did some exploring to the north and west of the road, riding through some neighborhoods, running into several dead ends, until I managed to come across another section of the road that I didn’t know existed. 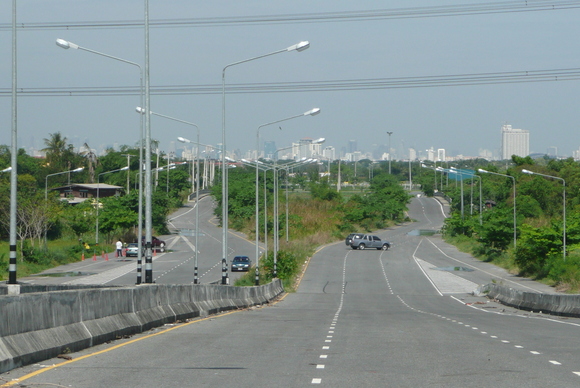 In the distance, this stretch of the road connects to a frontage road along the Outer Ring Expressway.  The cars you see are doing driver training, using the closed road to practice driving.

The funny thing about this stretch is, unlike the stretch to the east that successfully bridges two khlongs (canals), we can see where the funds ran out on this one: 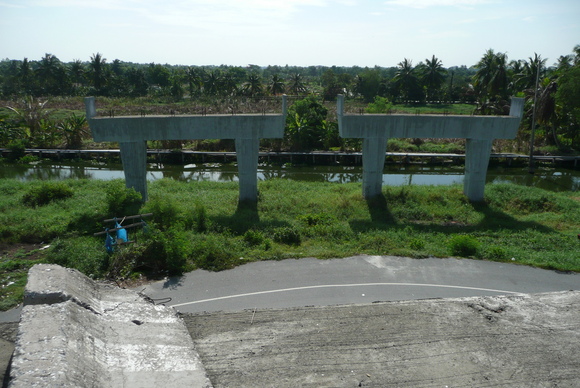 The road rises up an embankment and then stops short, with not much in the way of barriers!  If you continued directly ahead about 1 km, you would connect with the stretch of road that I regularly ride.

Here’s a map showing the two segments.  It was taken before construction on the westernmost segment was complete.  Oops – I guess it still isn’t complete, huh? 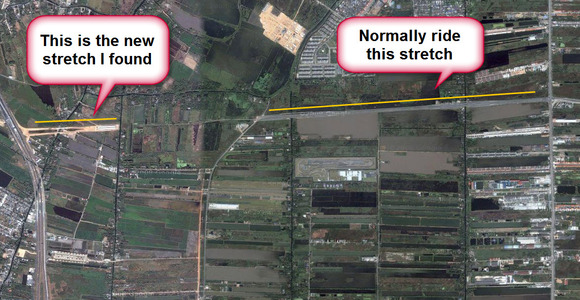 On the way back today, I explored a new route and discovered that Thanon On Nut (On Nut Road), which connects to Sukhumvit at the end of the Skytrain line, actually goes all the way out to the new airport.  Some 16 kms!

Riding back along this road, I spotted another bird: 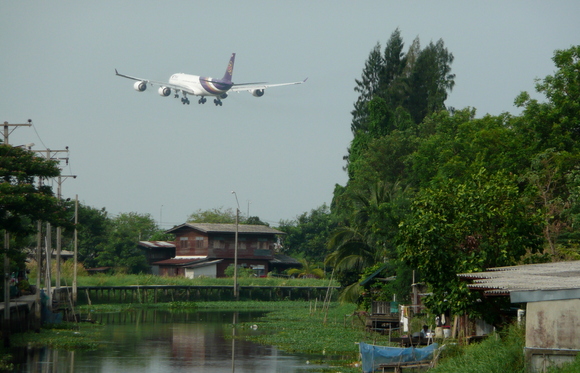 What an interesting contrast of modernity and tradition, huh?

0 thoughts on “Riding Around”