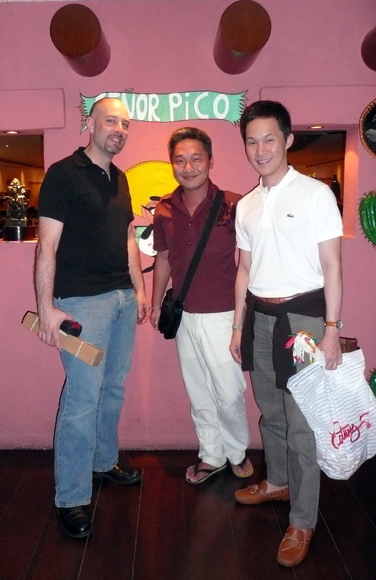 Late in the week, we received a call from Biing, who had finally arrived from Taiwan with his mother and brother.  It has been only about half a year since Biing arrived from New York with Sally and Malcolm.  Nice to have him return so soon.

After meeting for dinner, we decided to go for a drink at one of the hotels with a view.  A little pricey, yes, but a nice experience.  But then Tawn noticed that Biing was wearing flip flops, a no-no in nice hotels’ dress codes. 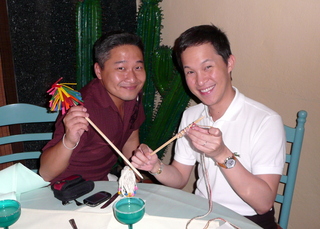 So we switched plans and went to the hotel next to his, ending up at the most incongruous of restaurants: Senor Pico.  This grand-daddy of Krungthep’s Mexican restaurants was almost completely empty except for a band of Latinas playing upbeat music that seemed forlorn in such a large and empty space.

We tucked into a corner table away from the racket and enjoyed a small pitcher of very strong margaritas.  Biing shared many thoughtful gifts with us, including a bottle of cashew fruit liqueur from South America.

After a nice visit, we dropped Biing at his hotel.  He and his family will continue their journey around Thailand and we’ll hopefully see him on the return leg.