Hot on the heels of Bruce’s departure, I did a one-day border run to Singapore.  The type of visa I have for Thailand (despite being a one-year visa) rather inexplicably requires that I exit and re-enter the country once every ninety days.  For no other purpose, it seems, than to ensure that the immigration officers have employment, seeing as how other types of visa allow holders to just check in every ninety days at the immigration office off Sathorn Road. 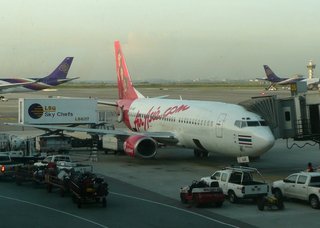 Accepting things as they are – a very Thai trait, if I do say so myself – I booked a one day trip to Singapore as a change of pace from the usual all-day van trips to Cambodia.  At least with Singapore there would be something interesting to see at the other end of the trip.

Keeping costs low, I flew Air Asia, the “Southwest Airlines of Southeast Asia”.  The outbound flight was on time and the return was only thirty minutes late – some sort of a record for Air Asia.  Both flights were pretty full although on the return flight I managed an empty middle seat between me and the lady sitting at the window.

It was a fun day for flying with good views of both Suvarnabhumi (left) and Changi (right) airports. 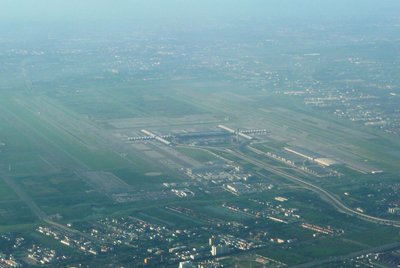 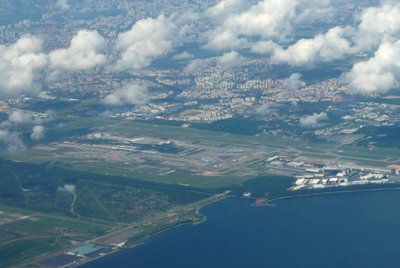 Arriving in Singapore at about 10:30, I spent an hour exploring the newest terminal (Terminal 3), which is really a beautiful facility with lots of light, water and plants to make it comfortable.  I also wanted to see the new Airbus A380.  There were two of them, but always with several layers of glass between me and them.  No opportunities for a clear view or a good picture.

I did, however, get a picture of this rather gaudily painted Air Asia jet: 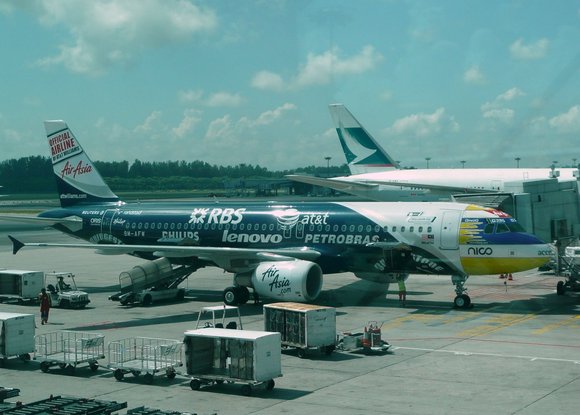 When I passed through the deserted immigration hall in Terminal 3, the officer was a little confused at how I had wound up so far away from my arrival gate (which was in Terminal 1).  When I explained that I had come over to see the new airplane, he promptly gave me his advice for the best view – outside the secured area and on the fourth floor.  Unfortunately, the planes were still parked outside the line of sight from the otherwise nice viewing gallery.

Taking the clean and efficient train into town, I met with Otto at Vivo City, the largest mall in Singapore.  You certainly can’t avoid malls when you visit there, and we had a very nice visit with lunch at a food court and then a stop for coffee.

Below – Indonesian style lunch with fried chicken and rice, along with a few pieces of Chinese dim sum. 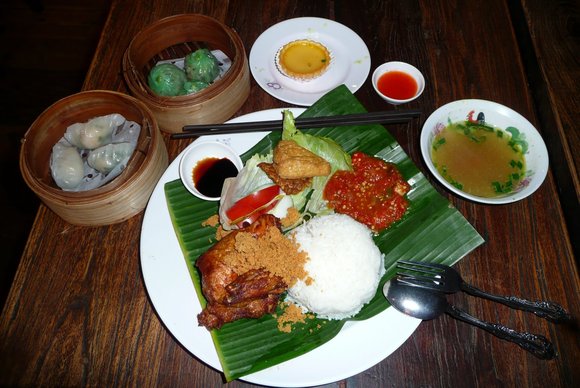 Late afternoon I headed a few stations away to the Chinatown area.  After a little exploring, I met with Suyoung, a former colleague from the SF Int’l Asian American Film Festival and the Hamptons International Film Festival.  Along with a friend of hers, we had a lovely dinner at a small Italian restaurant called Spizza.  Really good thin-crust pizza and a pine nut torte that was the perfect end to the evening.  As I told Suyoung, Tawn and I really should do more weekend trips to Singapore.  It is so nearby and there are lots of good restaurants to explore.

With an easy taxi ride I was back at Changi International in time for my return flight home, even with a little time to spare for duty free shopping.

With my return, I’m “locked in” to Thailand and will not be able to leave again until my return trip to the United States in December, when I’ll apply for another one-year visa.

23 thoughts on “Border Run to Singapore”