Last weekend Tawn and I took a little time to get out of the house, run some errands, and see some friends.  This, despite the heavy load of work.

BK Magazine, a free English-language newspaper, published a list of what they consider to be the best five or six tonkatsu restaurants in town.  Japanese make up the largest expatriate population in Thailand and we live in the heart of the Japanese section of town.

Not too surprisingly, there is some really good and affordable Japanese food to be had.  In fact, every time I head back to the US, one of the things I specifically don’t want to eat (besides Thai food, natch) is Japanese food.

We decided to try one of the recommended restaurants: Tonkatsu Raku Tei, located in the basement level at the Citi Resort service apartments on Sukhumvit Soi 39.

When you walk in, it becomes very clear that Tonkatsu Raku Tei (Hey! They have the same initials as former Prime Minister Thaksin’s political party… conspiracy?) is the real deal because all the other diners are Japanese.  That’s a good sign, right?

What I really wanted to try was the tried and true standard of all tonkatsu: rosukatsu, made from fillet of pork loin, with a thin layer of fat along the side, breaded in panko breadcrumbs, and lightly fried.

Served with two homemade tonkatsu sauces, an original flavor and a really good spicy one that tastes a bit like barbecue sauce but without the tomato, the tonkatsu was tender and not too oily.  The pork itself was a bit bland, although moist, and served as a neutral carrier for the sauces’ flavors.

One lesson we learned – sadly, after the fact – was that the sesame seeds in the bowl on the left and meant to be ground up, using the wooden pestle on the far right of the picture that we mistook as a chopstick rest.  Oh, silly us!

After lunch, we stopped by Scott and Jum’s house to see their new baby.  They live in an interesting townhome development that is very Grecco-Roman in its design.   Too bad I didn’t get a wider picture so you could fully appreciate the number of columns that adorned each building.

The baby, whose name I’m not sure how to spell correctly so I won’t try here, is very cute.  He’s a mixture of Thai and American heritage so has blended features.

He’s so low-key.  He didn’t really mind who was holding him, but apparently really hates being cooped up indoors and his fussing quiets when he is brought outside.

We drove Jum and baby over to a gathering of former United Airlines colleagues.  Tawn flew with UA for a few years around the turn of the century.  (That sounds old, doesn’t it?)  Sadly, we just received news that as part of their further cutbacks, United will be closing their Bangkok flight attendant base for the second time since the 2001 attacks.

The colleague’s house at which the gathering was held is up near the old airport.  It took a bit of driving to get to and we were confused and overshot it by a few kilometers.  Along the way, we passed the remnants of the elevated rail line that was originally going to run from the center of the city up to the old airport and then on out to the Rangsit area.

The project, which was operated by a Hong Kong-based conglomerate called Hopewell Holdings, ran into problems in the late 90s and the contract was canceled by the Thai government.  Due to the inability of the project to ever really gain traction, it became largely derided as the Hopeless Project.  All that remains of the project are a significant number of columns running along the Don Meuang Tollway. 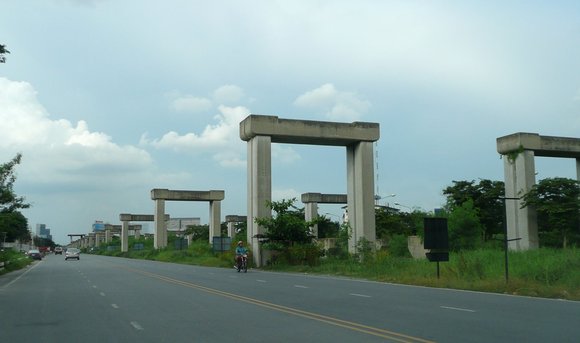 A sign of optimism, there were several housing estates built along the Hopewell right of way (which has a still-operating train line underneath it), including this slightly over-the-top property called Monte Carlo: 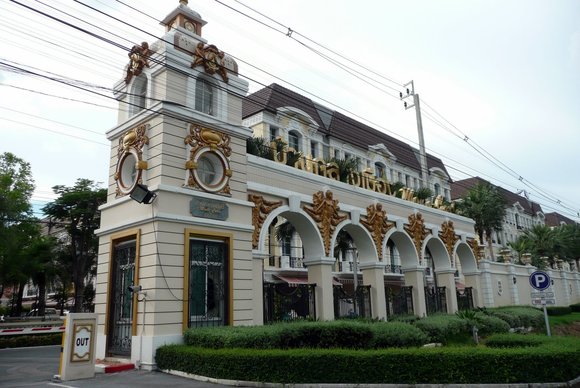 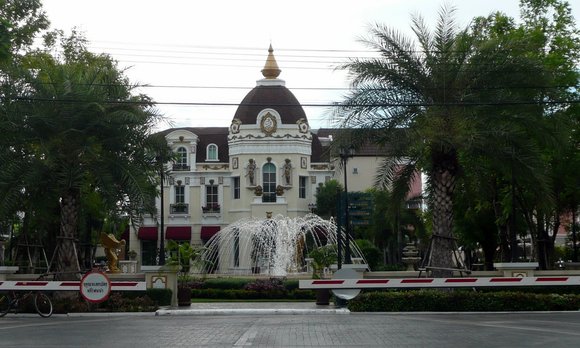 So the trip to see Tawn’s colleagues was a good use of time if for no other reason than it allowed me to get an up-close look at the Stonehenge of Thailand.  Every so often, there is talk of reviving the project or using the surviving infrastructure to build the extension of the airport link (which is still another year or more away from opening) to connect both the old and new airport.

One final thing to leave you with, a very nice pizza I ate at Bacco restaurant, just at the other end of the soi from us.

I think the restaurant makes its own ricotta cheese.  It was so good!