At the Paragon shopping mall there is a photo exhibit on display, the results of a nationwide contest.  The contest was held on the occasion of His Majesty the King’s 80th birthday last year and the photos were judged on different themes.  There was a category of pictures specifically honoring the Thai’s devotion to their king.  Another category was of general “life in Thailand”.  Another was for nature photos.

The lighting wasn’t great, so I was limited as to which pictures I could capture with my camera.  Here are a selection of the more interesting shots.   The first two and the final one were noted finalists in the contest.

This first one is particularly interesting.  Titled The Father’s Son, it was selected as an example of how people take His Majesty’s “Sufficiency Economy” theory very literally – to the extent of squeezing out the final drop of toothpaste from a tube.  This picture appealed to me because that’s exactly what my father taught me when I was a child, to the extent of cutting the tube open to get every last bit out.  How’s that for fiscally prudent Midwestern values? 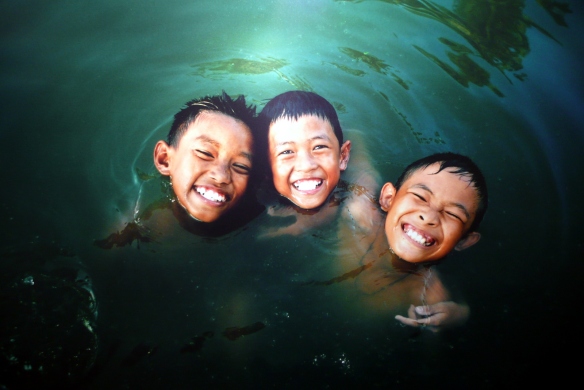 Above, a special celebration around Songkhran (the Thai new year) at the largest Buddhist complex in Thailand, located on the outskirts of Khrungthep (Bangkok).

Above, a monk collecting alms from a soldier not long after the coup in September 2006.

The lighting was poor, so I didn’t capture this one very well, but the actual picture is very sharp.  It is taken at the installation of a new Buddha statue at a temple, where community members and workers have a “laying on” of hands during a blessing.  Interesting angle.

12 thoughts on “Photo Exhibit for His Majesty the King”