Saturday July 5th was the American Chamber of Commerce’s annual Independence Day celebration in Khrungthep.  What used to be hosted by the U.S. Ambassador on the stately grounds of his residence on Wireless Road was discontinued several years ago because of security concerns.  A few years later, AmCham resurrected the tradition, moving to a new location at a football field and sports complex in Khlong Toei. 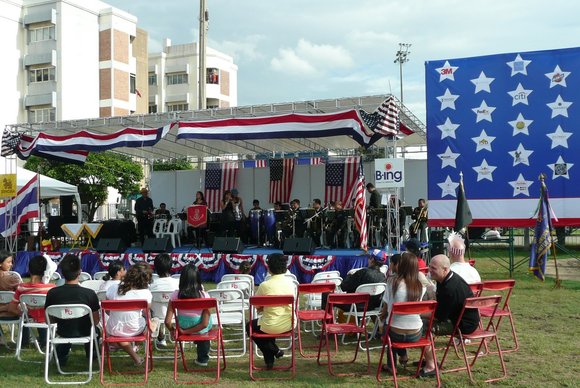 Invitations for the event came from two directions: Doug, a friend from Oregon, is involved in AmCham and sent an email.  A second email came from Democrats Abroad Thailand, which conducts a voter registration drive at the event.

There was a nice breeze Saturday afternoon and the gathering thunderstorm clouds provided some intermittent shade and, thankfully, nothing more than a few seconds of sprinkles. 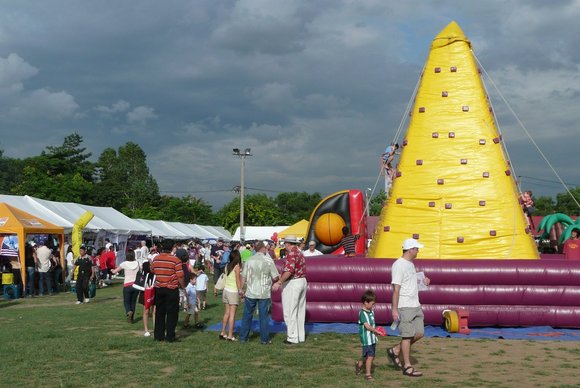 We were able to find a shady place to sit while the grounds were emptied and swept by heavy security.  The process for entering the field was slow – there was only one gate with two metal detectors and everything was being hand searched, much more thoroughly than even at the airport.  But we were in the shade and there were plenty of distractions while we waited to enter.

The set-up was very much like any Independence Day celebration in small town America: vendors offering barbeque, hot dogs and beer; raffles and giveaways; informational booths for different civic groups; giant slides and other games for the children; a stage with life music, magic shows, and other entertainments; the presenting of the colors by the local chapter of the Veterans of Foreign Wars; and evening fireworks.

Because it is rainy season, some areas of the field were quite muddy, resulting in more than a few children who looked like they had engaged in pig wrestling contests.  Along with many Americans were lots of Thais and other foreign nationals.

I headed over to the Democrats Abroad table and started my two-hour shift as a volunteer registering people as absentee voters, answering dozens of questions, and selling “Bangkok for Barack” t-shirts.  In those two hours, we probably signed up sixty voters and there were several hours remaining when I left at about 4:30. 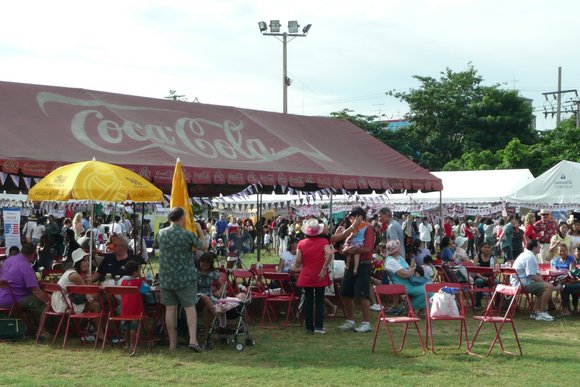 What was most interesting about the experience was the difference in perception between myself and the other four American expats who arrived with me.  Maybe this is because I was actively working at the booth while they grabbed some food and drinks and sat under a tent visiting and, it sounds like, complaining about the event.

Talking with two of them later on, I tried to understand what they felt was so bad about the experience, because they definitely sounded unhappy about it.  Here is my understanding of their concerns:

In conclusion, the event was designed “for people who actually miss America”.

While I discard as completely backwards the view of “love it or leave it” – freedom of speech is a constitutional right in the USA, after all – I can understand where that reactionary impulse comes from.  Since Saturday, I’ve spent some time thinking about their concerns, trying to understand their point of view.  It leaves me feeling kind of odd.

There are many things I dislike about American culture and I try to hang out with a group that is more diverse than just Americans alone precisely because of the “American group think” that is easy to run into amongst any insular group of expats. 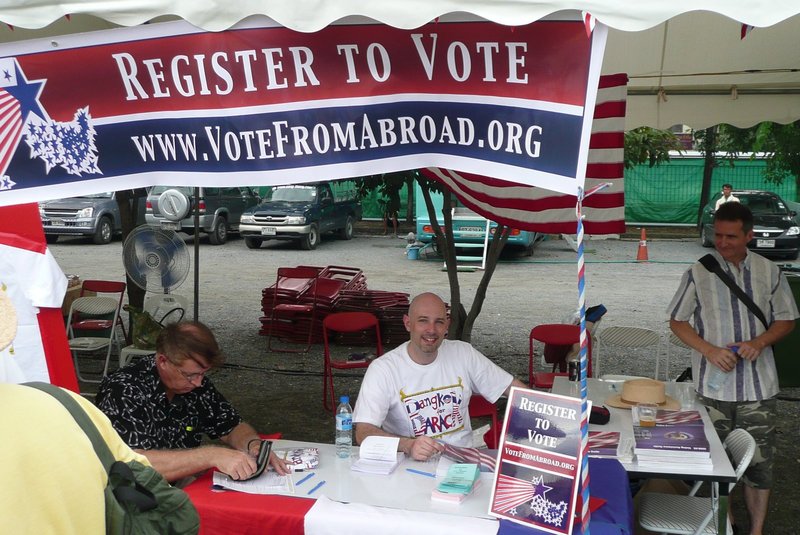 Still, my experience at the Independence Day festivities was very different.  Maybe if was different just because I was actively involved signing up voters, but here were my observations:

The reaction of the others to the event left me frustrated.  Frustrated in part at a sort of negativity that, political beliefs aside, looks like a dark vortex around which I wish to steer clear.  Sitting around bitching and moaning just breeds more bitching and moaning.  If you don’t like it, do something to make it better.

Frustrated also by the increasing habit of Americans both at home and abroad to isolate themselves in like-minded circles, interacting with and gathering news from people and sources that only serve to reinforce their already-held views.  It is healthy to challenge our views and beliefs, right?

Finally, frustrated that my friends didn’t have more fun.  The weather was nice, the Belgian beer being poured on tap from the Roadhouse BBQ stand was tasty, and the square dancing group from a local elementary school was cute.  In my opinion, it certainly beats another afternoon at the mall or another night sitting on Silom Soi 4 drinking whisky and ogling Thai moneyboys.

30 thoughts on “Independence Day in Khrungthep”