The second half of our weekend was more relaxing and less do-it-yourself than the first.  We had ten friends over for Sunday breakfast – a real breakfast, starting at 10:00, instead of one of those brunches.  Homemade buttermilk biscuits with sausage gravy; oven roasted potatoes and bell peppers; soft scrambled eggs with salsa; and assorted fruits.  Mimosas and fresh-brewed coffee and tea for those who were thirsty. 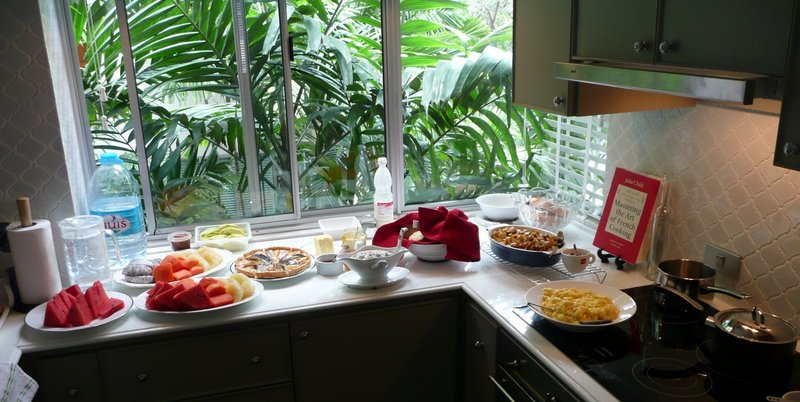 What an interesting mix of guests we had.  Brian made it to our house for the first time as he had been out of town on occassions when we had previously invited him.  Stuart and Piyawat were both able to make it as were Ken and Chai.  Of course, no party is a party without Vic there, and Doug brought two guests:  One of them, Gaye, is a native of Istanbul who has been studying massage in Chiang Mai for the past several months before returning home this Wednesday. The other, Orn, works for the American Chamber of Commerce in Thailand in membership and outreach.  Needless to say, they both had such interesting stories to share.

Sometimes after we throw parties the question arises, “Was it worth the effort?”  While I did choose to do a little extra cooking Saturday evening to prepare (I rendered the drippings from some fresh pork belly to make my own lard, which is the best fat to use when making roasted breakfast potatoes.  Dinner potatoes with rosemary are better with olive oil, though.), the dishes were all very easy to make, so this time both Tawn and I were relaxed enough to really enjoy the party and the answer to the question is definitely, “Yes!”

13 thoughts on “Come over for breakfast, won’t you?”