Tawn reports that I woke with a scream sometime last night.  No further details.  I have no memory of that. 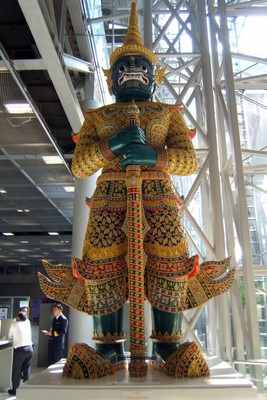 My flight back into Bangkok was smooth, a friendly morning service aboard THAI Airways International.  Mid-morning is both a good and a bad time to arrive at the new airport.  Good because it is not very busy so there is no wait for immigration.  Bad because since there was just a trickle of people passing through customs, it appeared to me (the bearer of five bottles of wine, a bit more than the 1000 ml allowed) that the agents were putting all bags through an x-ray machine.

(Right: a pair of demons guards the entrance to immigration at the new airport.)

Having never seen that before, I quickly assessed my options and decided it was better to jump on my sword than to have it thrust into me.  I went to the “red” lane, where you are to declare any dutiable items you have.  A half-dozen customs officers were standing around, eating some khanom (snacks) that one of them had brought to work.  Playing the ignorant tourist, I said in English that I had some extra bottles of wine and knew that I had to pay some sort of a duty on them.

There was a look of panic as their morning snack session threatened to be interrupted by work.

“How many bottles?” one asked.

“Five,” I replied, “They cost about 80 Australian dollars total.”

“How much is that in baht?”

“Would you open up your suitcase, please?”

I opened the suitcase.  The bottles were all well-wrapped and three were in a styrofoam carrying case.  I didn’t unwrap them but just pointed, “There’s three in there and another two here.”

“I know I’m supposed to pay a duty on this,” I reinforced, since one of the agents seemed to think that maybe I wasn’t supposed to bring anything in over the allowance, period.

After a moment of thought, the agent responded with a question rather than a statement – maybe everything can be bargained in Thailand:

“You need a receipt?”  Code for: Do I have to report this to my superiors?

(Note to my upcoming visitors: intercontinental flights arrive at busier times and I’ll reports I’ve heard from other travelers at the new airport is that spot inspections do not happen regularly, so continue to pack a few bottles of wine with you.)

So even with the extra 1,000 baht duty, these bottles of wine were still about 60% of the price they would be in the United States and significantly less than they would retail for here in the Kingdom.

Tawn was waiting outside and we wandered out to the car and headed home.

Tod’s friends from San Francisco, Darrin, Orlando, and Marc were in town.  We watched the new James Bond movie with them and then ate dinner at Taling Ping on Soi Wat Khaek near Silom.  On the way home, our taxi was racing along Rama IV and we overtake Tod, Darrin and Orlando in their taxi.  Picture below: 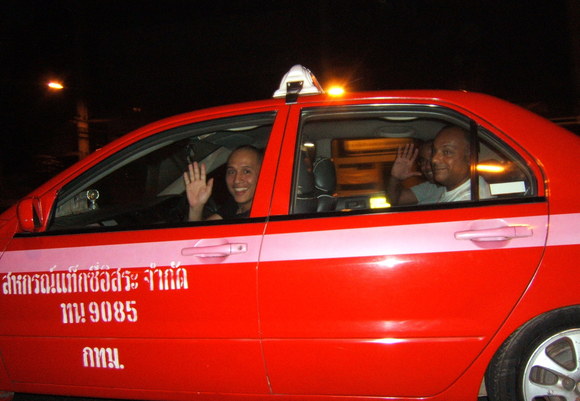