Saturday morning Floridan Bill, his local friend Kom and I headed out for a bicycle ride in Phra Padang.  The morning dawned wet and cool but with a look at the sky it seemed plausible that the weather would improve as the morning proceeded, so we continued with our plans.

Driving to Wat Khlong Toey Nok adjacent to the container terminals of the Port of Bangkok, we parked the car, saddled up our bicycles, and headed to the pier.  Unlike the last time I did this ride with Markus, the ferry boat we were offered was quite small: nothing more than a long-tail boat – a motorized canoe – with the water just centimeters below us. 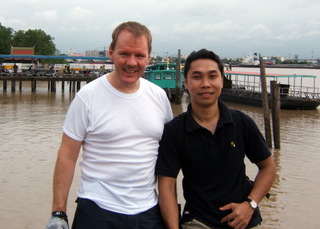 Phra Padang is a lightbulb-shaped peninsula surrounded on three sides by the Chao Praya River.  Across the river on each of those three sides is urban development.  How Phra Padang has managed to escape this development is a matter of some mystery, a mystery tied to the fact that only a narrow isthmus, wide enough for a single road, connects it to remainder of the western bank of the river.

Phra Padang is mostly coconut and banana plantations, jungle, concrete footpaths and narrow roads that would be more at home in Samut Songkhram, eighty kilometers away from the, than in the heart of Khrungthep.

We spent more than three hours riding about, mostly on the paved roads, occasionally on the footpaths or on muddy trails, logging in a leisurely 28 kilometers by the time it was all done.

Our primary destination was the floating market, which other than a few noodle vendors still tied up along the shore is no longer floating, the other vendors having fled to stalls along two canal-side paths.  We sampled a variety of khanom – snacks – both of the sweet and savory variety, before continuing our journey. 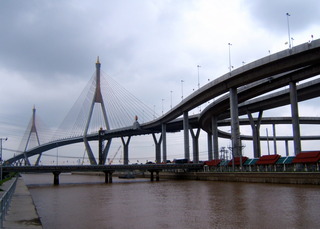 The furthest extent of our explorations was our arrival at the edge of Phra Padang, the flood control canal that cuts across the isthmus, effectively making it an island rather than a peninsula.  Soaring above the canal, a civily-engineered demarkation of jungle from civilization, is the mega bridge project, as yet unnamed.

Opened just two weeks ago, this marvelous combination of two dual-tower suspension bridges high enough to allow ocean-going ships to pass underneath, and a curlicue of ramps in the middle, allows traffic from three directions to converge and interchange, heading smoothly in any of the directions.  Below it is the flood control canal and beside that, a small and poor neighborhood of happy children riding their bicycles and running in the street, practicing their English (“hellogoodbye”) with passing farang cyclists who stop to photograph the bridge.

After an afternoon of rest, Tawn and I picked up Bill and Kom from their hotel around 7:00.  Accommodating Bill, a vegetarian, and Kom, who doesn’t stray far from the food genre of Thai, Tawn selected the very nice restaurant Anotai, tucked beside Rama 9 Hospital.

The fried foods were notable because the chef pays special attention to the oils she uses: they are of the highest quality and the temperature is carefully controlled so the end result is something light, crispy, and not in the least bit oily.

Desserts swing in a wildly different direction as they are all western, the result of a on-site bakery and ice cream shop.  We enjoyed an apricot claufoutis and a dark chocolate and cherry cake with homemade ice cream.

After dropping Bill and Kom back off at their hotel, as they had an early morning trip to Ayutthaya for some photography prior to Bill’s evening flight back to the United States, Tawn and I stopped by the Suan Lumpini Night Bazaar.  A cooler (literally and figuratively), less crowded, and more upscale alternative to the overheated Chatuchak Weekend Market, the Night Bazaar is slated for closing next year as its lease ends and the land owner decides to seek more profitable ways to use the land.  Maybe another mega-mall?  We certainly have plenty of those!

The feature right now is la Grande Rue de Paris, a 60-meter tall Ferris Wheel that has made its way from Paris to Birmingham to Manchester to Amsterdam before settling in for a year or two here in the City of Angels.  Lighting up the night sky and referred to by some locals as the “Bangkok Eye,” passengers are entitled to a expansive view of the surrounding corner of the city, most of which is quite dark at night.  But it is a nice treat nonetheless and so we’ve finally checked off another one of our to-do items from our mysteriously invisible to-do list.

2 thoughts on “Bicycling in Phra Padang”