Wednesday, Tod joined me for the second time to teach down at the school in Bangkhonthii.  This is good not only because the students like him (heard last week: Phom khittung khruu Kobfa – “I miss Teacher Tod.”) and he provides helpful translations when I’m explaining more complex concepts, but also because he’s just a pleasant person to have with you on an adventure.  This week had a few adventures, mostly of the “Wild Animal Kingdom” variety.

Right: A student leads a game of Bingo, writing words on the board for everyone to read. 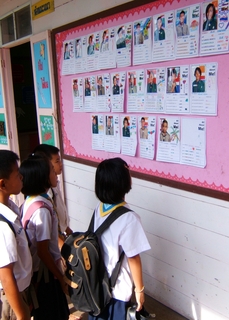 The electricity is back on and the fans are working in Bangkhonthii.  The number of functioning dry erase markers is on a precipitous decline so a trip to the office supply store to supplement their ranks will be necessary before next week.  The older children completed their “All About Me” project, which has lasted a few weeks.  The end result: a bulletin board full of mini-resumes with full-colour pictures, names, ages, and favourite fruits, animals, colours, and body parts.

The younger children were admiring the board after school, asking when they would get to do the same project.  “In a few weeks,” I said, adding to myself, “when you learn what the words “animal,” “fruit,” and “colour” mean!”

There are usually one or two dogs from the nearby houses who hang around the school.  They are friendly and generally patient with the tremendous abuse suffered on them by the students, especially the boys.  Today there were another half-dozen dogs there with non-stop turf wars, growling, barking, and since at least some of the dogs were in heat, pro-creating.

Warning: This next part gets a bit graphic; delicate readers may choose to skip it.

While working in groups – Tod worked with half of the students, I took the other half to sit on the porch and review sentence grammar – one of the male dogs came up and sniffed around.  One student was petting him, and the other students became quite talkative when they noticed the dog’s prominently erect penis, which seemed to be dripping blood.  Nice.  Some students thought this was quite intersting; others scooted away trying to get as far from the dog as possilbe.  I tried to shoo the dog away so we could get focused.

Later in the afternoon, the students having way too much restless energy, we went out to the playground.  One of my favourite games – it burns up energy very effectively – is to draw pictures of different fruits using sidewalk chalk, with their names written in English – then have races where participants from three teams run across the playground to locate the fruit whose name I’ve called out.

When this proved to be lopsided in favour of one team, I changed the game and had all the boys work in one group and girls in another.  Then we had the individual groups run from fruit to fruit, Tod and I trying to coordinate so their paths didn’t cross.  It is funny to watch the herd behavior: if one person who is regarded as a leader starts to head in one direction – even if it is wrong.  When it is determined that this person is wrong everyone else will turn towards the next presumed leader, following like a flock of birds.

While we were out there, the pack of dogs wandered up and the drippy male dog proceeded to mount one of the female dogs who usually stays around the school and have sex.  This was like some National Geogrpahic episode, except we were right there as were two dozen screaming, yelling, “eeew-ing” Thai children.  I and another teacher tried to clear them out, coitus interruptus being an appropriate response to recess interuptus.

The attention of the students was easily redirected when I told them to go back to the classroom so we could play bingo.  “Biiiiiiinnnnnggggooooo!” and they’re off.

A day at Bangkhonthii School isn’t complete without taking photos.  The teachers regularly are snapping pictures – in fact, I should get the digital files for some of them as there are few pictures I’ve posted of me teaching – and of course I carry my camera to capture whatever interesting moments occur.  The students are such hams, though, that they are excited anytime they can get photographed. 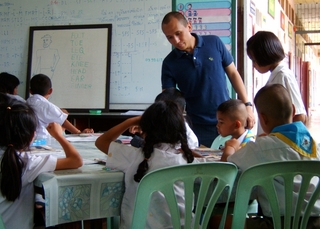 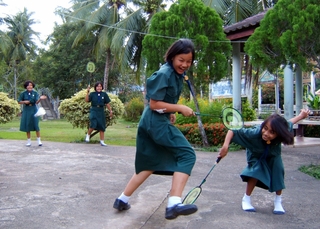 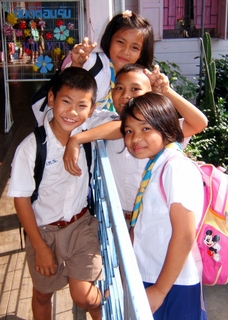 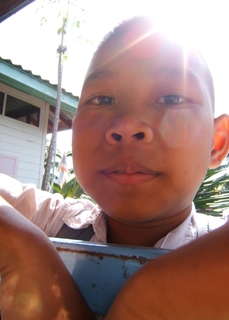 Clockwise from top left: Tod helps the children play Bingo – “Does everyone see “chin” on their card?”  Afternoon session of badminton among the older girls, using a rope tied to the flag pole as a net.  A “bright” student.  Younger children make rabbit ears after class is over.

Also on Wednesday, Ajarn Yai plied as much of a guilt trip as she could on me, since I had failed to show up on Monday for a major community event.  She told Tod how many parents, monks, and other important people had showed up, looking forward to meeting me.  For my part, I brought a large basket of expensive imported Washington apples and California oranges for her and the other teachers.  Tawn assures me that Thais have short memories on things like this.