First, let me clarify: there is no sign anywhere near my apartment indicating that right turns are illegal during commute hours.

So when I was trying to make a right turn into my apartment on Tuesday afternoon at about 3:30, I was suprised when a khon tamruat (police officer) pulled up along side me, shook his head, and indicated that I should continue driving onwards.

Confused, since I and hundreds of others of people make that turn all the time, I assumed he just didn’t want me blocking traffic there.  So I drove further down the road.  Considering my options for making a U-turn, the closest location with a dedicated u-turn was about 1.5 km down the road (about 1 mile) – through heavy traffic and two major intersections.

This didn’t make a lot of sense to me, so about 200 meters down the road I saw a break in the oncoming traffic so made a right turn into the Q House office complex.  Upon later research, there is a small sign on the left-hand side of the road nearby indicating no right turns during rush hours. 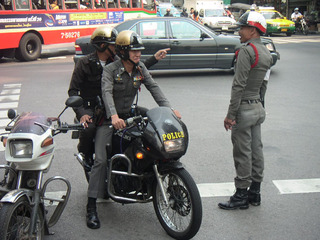 The police officer, keeping an eye on me, drove down to the parking lot and pulled me over.  In his limited English, he told me that there was a sign saying no right turn.  So I asked where I was supposed to make a U-turn if I couldn’t turn right.  “There’s a sign.  No turn,” was his response.

The normal practice when you’re pulled over by a low-paid police officer is to give him your “Thailand Driver License” – a 100-baht bill folded and discreetly placed behind your regular driver’s license.  Since I’d like Thailand to make it to the rank of first world nations one of these years, I’ve decided that I’m not going to support that practice.  So I gave him my International Driver’s License (available for $10 at the American Automobile Association, $15 non-members) and my California Driver’s License.  He didn’t seem interested in the California license so took the IDL instead.

He asked me whether I read Thai (I said no – speaking English the whole time) and then wrote me a 400-baht ticket, explaining (kind of) that I had to go to the Thong Lor police station to pay the fine and retrieve my license.

So I have had my first experience being pulled over.  I’ll go to the police station today or tomorrow and retrieve my license and report on that experience.  I’m going to demand a signed and dated receipt for my fine, though.  Not going to pay money into the deep pockets of the police chief.

2 thoughts on “My Friends at the Metropolitan Bangkok Police”