Another Wednesday, another trip to Rongrian Bangkhonthii (Bangkhonthii School).  With week number four, I think the students, teachers and I are settling into a routine.  My presence isn’t a novelty and so we’re able to settle down a bit more in class and get more accomplished.  Also, I’m seeing progress in the children: increased vocabulary, ability to start responding to question-and-answer patterns we’ve discussed previously, less shyness. 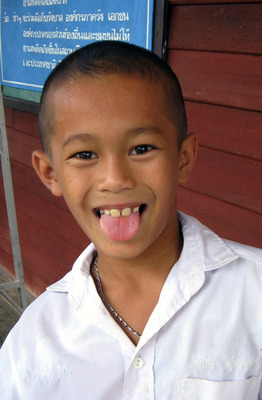 The best news of all, my trouble child behaved this week, didn’t steal anything, and didn’t have to be flung over my shoulder and carried to see the principal. (Pictured to the right)  I spent some time working one-on-one with him and it is heart-breaking because the potential in him is very plain to see.  But I think he will never tap into that potential: lack of family support and finances, combined with teachers and peers having labeled him as a trouble-maker.

The principal and teachers do care a great deal and put a lot of effort into their children, but I think they reach a point where they feel they’ve put as much into an individual child as they can.  This dove-tails with the Thai Buddhist philosophy on karma and reincarnation.  Essentially, there is a thought in the back of most Thai’s minds that the circumstances people find one in in this life are a result of karmic actions from previous lives.  So in this case, while the others feel pity for this child, there also seems to be a touch of “What can we do?  That’s the way it is,” going on. 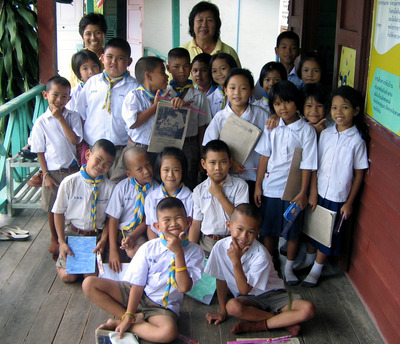 One project I’m working on is to have each child create an “All About Me” sheet, containing their picture, and places for them to write their name, age, favourite animal, favourite colour, etc.  (Sorry Americans: British spellings are the educational standard here.)  As part of this project I brought my camera and each child posed for a photo that I’ll cut and paste into the document.  (Left: Grades 1-3)

Bringing out a camera necessitates some candid shots, as Thai children are pretty big hams! 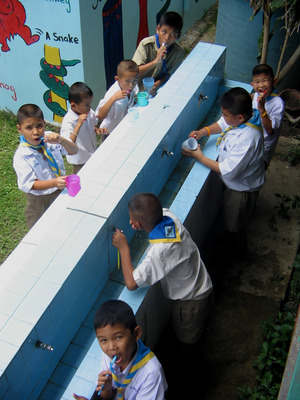 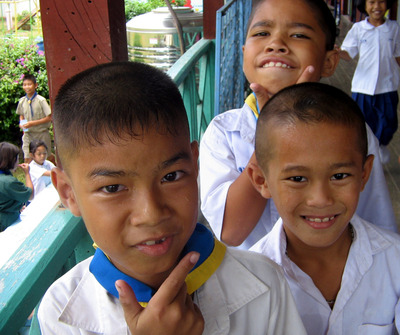 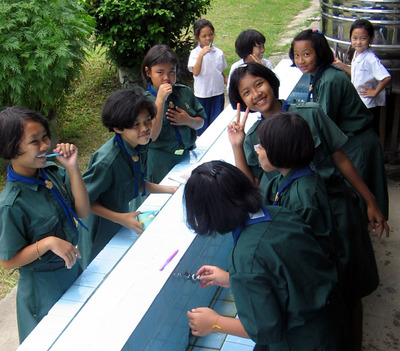 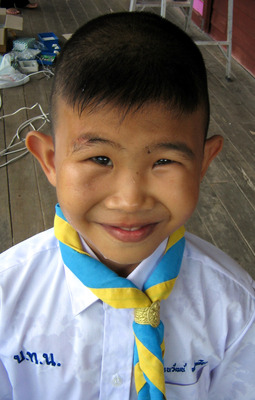 Above, left to right: (1) After lunch, everybody brushes at the communal sinks.  The boys have their own sink as do the girls.  An important part of the teachers’ jobs is instilling the children with behavioral, social, and hygenic standards.  (2) Faces washed and teeth brushed, it is time to strike a pose for the camera.  (3) The girls are more dilligent about their brushing – note that it is scouting day on Wednesdays.  (4) The younger brother of one of my other students wanted his picture taken khon diaw – by himself.

One idea I have is to save up these photos and then in the springtime, just before the end of the school year, to create a scrapbook on Snapfish or Ofoto and print up a copy for the school.  Maybe even copies for each child?  Each one could be personalized, right? 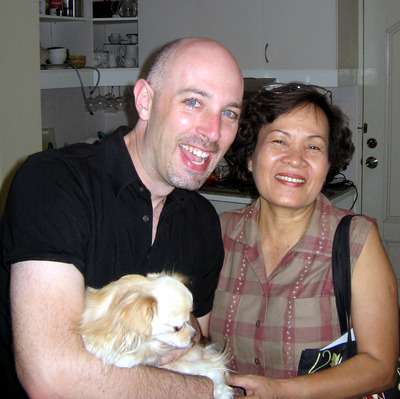 Tawn’s mother came by the apartment on Sunday late afternoon to visit, bringing along one of Tawn’s dogs.  I think this is a public relations ploy on Tawn’s part.  He’d like to have a dog in the apartment and I’m not keen on the idea, especially since I’m the one who would end up having to take care of it all day long.  By bringing one of his dogs over, I think Tawn hopes I’ll suddenly say, “oh, how cute – we need to keep him with us here at the apartment!”

Wow – that flash really made me look pale.  Where’s that suntan as a result of all the biking?

2 thoughts on “Brushing Your Teeth”