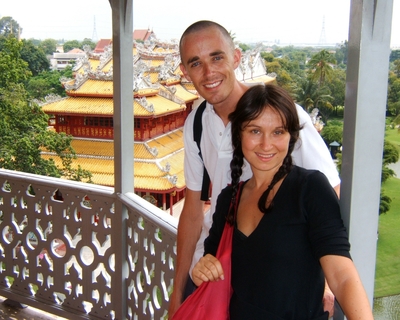 Today was a road trip 80 km north to Ayutthaya, the second capital of the Kingdom of Siam (Khrungthep is the fourth).  On the way we stopped at Bang Pa-In, one of the summer palaces of the Chakri dynasty, especially popular among Rama V and Rama VI’s reigns.  The palace grounds are a hodge-podge of architectural styles with Victoria, Chinese, Thai, Italian and Grecco-Roman buildings.  Right: Brad and Silvia atop the Italianesque viewing tower at the Bang Pa-In Palace.

We travelled with Benny, an American who was on our bicycle trip yesterday.  Originally from Houston, he currently is working as a contractor in Baghdad and was in Thailand on holiday.  He’s a very nice guy and definitely not what you might expect from a civilian contractor in war-torn Iraq. 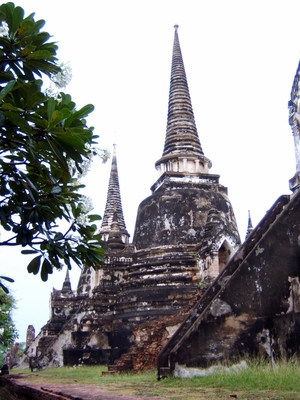 While in Ayutthaya, we spent the afternoon with Kari Harmon and visited briefly with her husband, Ron.  Former Union Language School students, these Texans are doing missionary work with the Baptist church.

Kari took us to a restaurant they have found that served very nice Thai food, and then we went into the Historical Park to look at the ruins of the old capital which were destroyed by the Burmese in the mid 1700s.

We encountered heavy rain showers as we finished lunch which abated by the time we reached the ruins ten minutes away.  This dropped the temperature significantly, making it the coolest visit I’ve had to Ayutthaya yet!

After visiting the historical sights and trying some roti sai mai (crepe-like roti with “silk” – spun palm sugar threads) we went to the elephant karral just north of the city.  The elephants that tourists can ride in the Historical Park are actually housed at the karral and their mahouts (keepers) live there, too.  While it isn’t a tourist attraction, per se, you can walk right up to the pens and touch and feed the elephants.

I’ll add some additional commentary and some video footage of me being accosted by elephants when we return from Kanchanaburi on Friday. 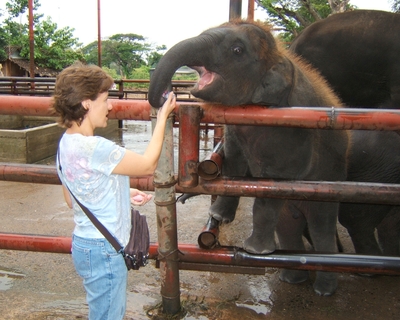 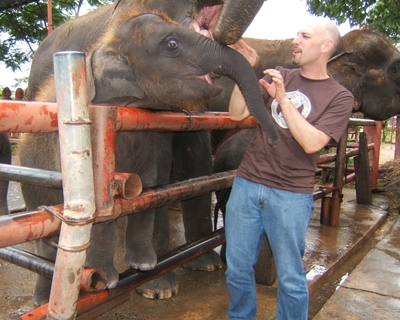 Above: Chris and Kari interact with the elephants.